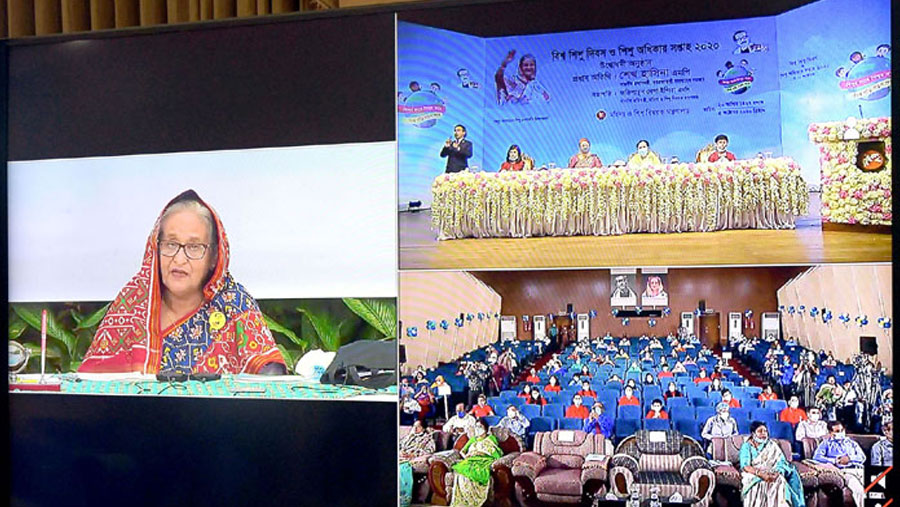 Mentioning that she was moved immensely by unnatural death of any child elsewhere across the globe, Prime Minister Sheikh Hasina on Monday (Oct 5) sounded a note of warning against child repression as her government gave special attention on securing every children’s life.

“We are taking measures to ensure their (children) security. We are giving special attention on taking immediate action once repression on the children in any form takes place. We want our children to be safe and good human beings,” she said while virtually inaugurating the World Children’s Day and Child Rights Week-2020.

The premier opened the event as the chief guest from her official Ganabhaban residence in Dhaka through a video conference organized by the Ministry of Women and Children Affairs from Bangladesh Shishu Academy auditorium, local media reported.

Recalling the assassination of her 10-year old brother Sheikh Russell along with other children and the Father of the Nation and most of his family members on Aug 15, 1975, she said, “I am shocked seriously whenever witness unnatural death of any child, no matter it takes place at home or abroad or on the Bay of Bengal or beside the Mediterranean Sea.”

She reiterated her desire that they wanted to turn the world into a suitable and peaceful abode for the children.

In this connection, Sheikh Hasina mentioned, “We have said that today’s children are the future of the nation. Yes, it is indeed, but we have to build the future generation as good human beings by creating scopes to utilize their talent, knowledge and intellect.”

She went on saying that it would be possible only then when a congenial atmosphere will be created for them with ensuring basic needs including proper education and better healthcare services alongside making arrangements for getting involved in sports and culture to give them a beautiful and developed life.

The PM also unveiled covers of a number of children’s books (25 books) written on the life and works of Father of the Nation Bangabandhu Sheikh Mujibur Rahman, “Amra Ekechi 100 Mujib”, a book published with selected pictures drawn by children, and “Amra Likhechi 100 Mujib”, another book published with writings of children, on the occasion of the ‘Mujib Year’ marking the Bangabandhu’s birth centenary.

At the outset of the function, the premier witnessed a colourful cultural programme performed by the children.

Nabid Rahman Turjyo and Hridika Noor Siddique, trainees of Bangladesh Shishu Academy, spoke on the occasion on behalf of the children.

The PM called upon the guardians to take their children to nearby parks and allow them to play in the sun for at least one hour, considered very important for the growth of their mental and physical health during the Covid-19 pandemic. “We all have to maintain their health hygiene and safety,” she added.

The PM, however, requested all to follow the health guidelines.

In this connection, she said, “Children are passing miserable days as the schools are closed due to the coronavirus pandemic.”This is very much painful for them. What will they do sitting at homes? The children of joint families are well in comparison to the children of single families as the former can play with other children of their families.”

The PM said her government has aired recorded lessons for the students on the Sangsad TV and arranged classes online as the academic life of the children could not be hampered.

“We have taken measures on a large scale to hold classes online as the study of the students keeps running. We are using technology to pursue the move and we will urge the guardians to take special initiatives to this end,” she added.

Referring to Bangabandhu’s advice to the children to read attentively and be worthy citizens of the country, she said, “Children have to pay attention to their studies as no contribution could be made for the country without education.”

The premier also stressed the need for making arrangements of sports and cultural activities for the children alongside studies to make them worthy citizens.

She said that her government has been building mini stadiums at every upazila across the country as everyone including the children could play. The government is also building an academy for the special children to enable them to take training.

The premier appreciated the special children as they have earned gold medals from the Special Olympic.

In this connection, she said, “There may be some problems in leading life and all will have to move forward resolving those.”

She said that the Father of the Nation made primary education free for all and established a 10-bed hospital at every union to ensure education and healthcare services for all.

Spelling out various measures including distribution of free textbooks, stipends and different kinds of incentives and vaccination taken by the ruling Awami League government to ensure health, education, recreation and welfare of the children, the premier said the government has formulated the National Child Policy 2011, the National Child Labour Elimination Policy-2010 and Children Act-2013.

As many as 1.33 crore students of primary schools are getting stipends through mobile phones of their mothers from the government, she said. “We didn’t stop sending the stipends even during the pandemic,” she added.