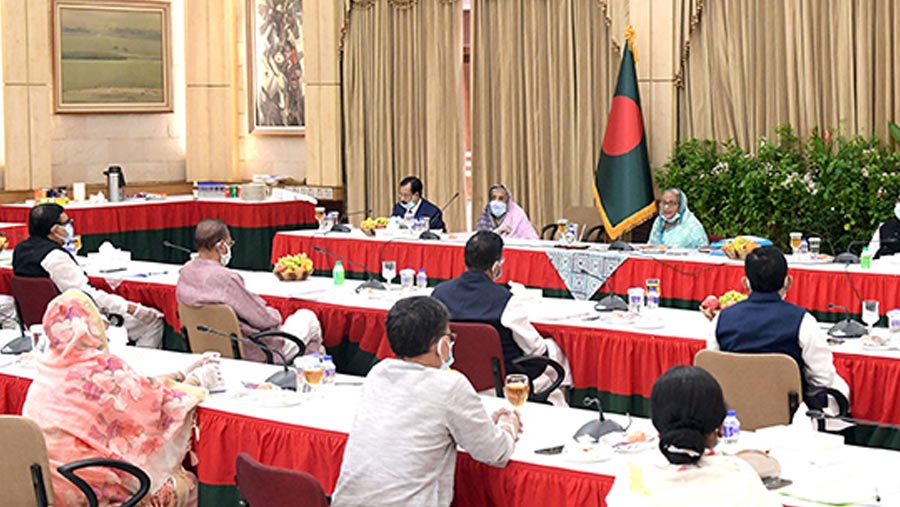 Prime Minister Sheikh Hasina on Saturday (Oct 3) said her government has been tirelessly working to face the Covid-19 pandemic and keep running the country’s economy.

“We have been trying our best to do everything to face the pandemic and keep running the country’s economy,” she said in an introductory speech at the meeting of the Bangladesh Awami League’s executive body at her official Ganabhaban residence in Dhaka, local media reported.

The premier said that the government has reached relief and cash incentive to every people, announced various stimulus packages, taken prompt health related measures and initiatives to increase food production to overcome the onslaught of the Covid-19 pandemic on the livelihoods of the people and the economy.

Sheikh Hasina, also the President of the ruling Awami League, thanked the leaders and activists of the party and its front and associate bodies to stand by the people during the Covid-19 pandemic, cyclone Amphan and the flood by risking their lives.

She prayed for salvation of the departed souls as 522 leaders and activists including lawmakers and cabinet members have so far died from the Coronavirus.

The premier said that people have got the assistances from the government only for having the Awami League in power.

She added: “Many people could have died and it couldn’t explain in language that how immense sufferings the people would have faced during the pandemic if any other party (instead of the Awami League) had remained in power.”

The PM said no other party and organisation come forward to stand beside the distressed people during the pandemic.

They (other parties, mainly BNP) are passing busy days to give lip services using the broadcast and print media, she said, adding that her government has given the approval most of the electronic media.

The premier spelled out the efforts made by her party men in reaching relief to the distressed people, making the people aware to follow health guidelines, arranging burial of the Covid-19 patients alongside cutting paddy of the farmers to minimise the plight of the people during the pandemic by risking their lives.

“No other political party made such a great sacrifice,” she added.

She said her party’s main strength is the trust and confidence of the people.

Sheikh Hasina called upon all the leaders and activists to keep continuing the party’s organisational activities mainly using the digital platform.

“Organisational strength is the biggest thing for a party. It becomes clear that the Awami League still remains well-organised at the grassroots while its leaders and activists have started working to help the distresses people in the field during the pandemic,” she said.

The PM, however, credited concerned ministries particularly the Health Ministry and the Directorate General of Health Services (DGHS) for bringing the coronavirus situation under control through synchronised efforts.

In this connection, she said, “Some people are saying many things about the health ministry and the Directorate General of Health Services. But I have to say one thing that they did promptly whatever directions I had given. ... We have been able to bring the coronavirus under control as they have worked properly with utmost sincerity. ”

The premier said her government recruited 2,000 doctors, 3,000 nurses and technologists by relaxing some of the urgent rules to this end alongside making arrangements of required hospitals keeping in mind how many people might be infected with the Covid-19 to make sure their prompt treatment.

She continued that they even asked the concerned authority to arrange oxygen cylinders and set up ICU in every district hospital.

The PM credited her government’s efforts to keep moving the country’s economy and thus achieve 5.6 percent growth in the GDP despite the economic activities have got stuck across the globe due to the pandemic.

She said that they have announced a huge budget of over Taka five lakh crore without making any curtail mainly to keep moving the wheels of the country’s economy.

“... We’ve announced our national budget. We didn’t reduce it, rather enlarged it from the last one ... placing an over Tk 5-lakh crore budget was a tough job ... we spoke that we’ll spend less, we’ll spend what we need the most, we placed the budget to keep our economy in shape.”

The premier also said they have announced stimulus packages for the people of every profession from the day-labourer to farmer, small traders to industrialists to keep moving the country’s economy and ease the sufferings of the people.

She said they even gave cash incentive to the people after preparing a list through proper scrutiny, adding that they even gave money to expatriate Bangladeshi workers who lost their jobs abroad.

The PM said her government has brought back many Bangladeshi expatriate workers from abroad as they lost their jobs and brought them under the stimulus packages.

She said her government has directed all concerned to increase food production so that the country does not fall into any crisis of food as the world economy would have to suffer due to the pandemic and thus it might face food crisis.

The PM asked her party leaders and activists to stand beside the people to be imbued with the ideology of Father of the Nation Bangabandhu Sheikh Mujibur Rahman as he dreamt of changing the fate of the people by making Bangladesh a prosperous country.

“We have been trying heart and soul to materialise Bangabandhu’s dream of making Bangladesh free from poverty and hunger. This is our main commitment during the “Mujib Borsho.”

The PM reiterated her commitment that no landless or homeless people will remain homeless after the Mujib Year.