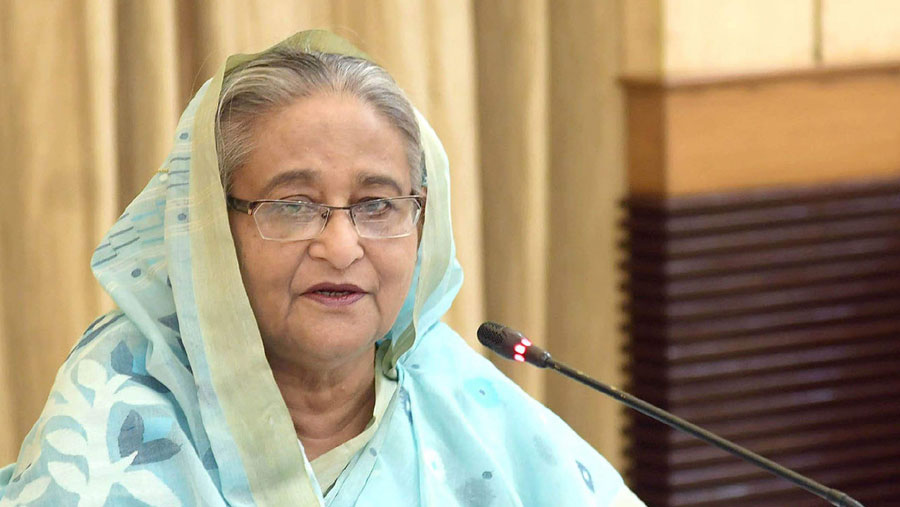 The 74th birthday of Bangladesh Awami League president and Prime Minister Sheikh Hasina was celebrated across the country on Monday (Sep 28) amid enthusiasm, local media reported.

On Sep 28 in 1947, Sheikh Hasina, the eldest of the five children of Father of the Nation Bangabandhu Sheikh Mujibur Rahman and Begum Fazilatunnesa Mujib, was born at Tungipara in Gopalganj district.

The celebration of the birthday of Prime Minister Sheikh Hasina this year got a momentum as the global pandemic Covid-19 created the scope for her to stay home on her birthday. The premier usually stays in the USA during the time to attend the annual United Nations General Assembly (UNGA) session every year.

Like previous years, Bangladesh Awami League and its affiliated organisations celebrated the day through various programmes, including discussions, Doa Mehfils, special prayers, distributing foods among the poor and organizing photo exhibitions abiding by the appropriate health guidelines, across the country highlighting the life and achievements of Sheikh Hasina, who is driving the nation towards prosperity following the footsteps of her father Bangabandhu Sheikh Mujibur Rahman.

Marking the day, a Doa and Milad Mehfil was held at the Awami League central office in the city’s Bangabandhu Avenue in the afternoon.

Marking the day, the Media for Development and Peace (MDP) organized a seminar titled ‘Sheikh Hasina in Women Empowerment: Bangladesh in the World Leadership’ at the Jatiyo Press Club (JPC) in the morning. Awami League Joint General Secretary and Information Minister Dr Hasan Mahmud addressed the seminar as the chief guest with JPC General Secretary Farida Yeasmin in the chair.

Bangabandhu Dustha Kalyan Sangstha organized a discussion at the JPC, while Liberation War Affairs Minister AKM Mozammel Haque addressed the programme as the chief guest with its President Mahbub Hossain in the chair. AL Central Working Committee Member Jahan Kalpona and Awami League leader MA Karim spoke at the discussion, among others.

Besides, Doa and prayers were offered at all mosques, including the Baitul Mukarram National Mosque, across the country after Zohr prayers, seeking the Prime Minister’s good health and long life.

A special prayer was also held at the Dhakeshwari National Temple at 11 a.m., seeking the premier’s sound health and long life.

On the birthday of the premier, prominent citizens including educationists, economists, writers, physicians and cultural personalities also wished good health and long life of Sheikh Hasina, who is leading the country as the PM for the third consecutive term.

Sheikh Hasina, daughter of Bangabandhu, spent much of her childhood in the small hamlet where she was born. She started her schooling there. When Bangabandhu was elected a legislator, the family relocated to Dhaka in 1954.

She was enrolled to what is now Sher-e-Bangla Girls’ School and College and later to Azimpur Girls’ High School from where she completed her secondary education in 1965. She was then admitted to what is now Badrunnessa Government Girls’ College.

During her Bachelor’s course she was elected vice-president of the students’ union of Eden Girls’ College (Badrunnessa and Eden Girls’ College was one college in those days). Later, she enrolled into her Masters’ program at the Bengali department of Dhaka University.

In 1968, with the blessings of her imprisoned father, Sheikh Hasina was married to Nuclear Scientist Dr Wazed Miah.

During the Liberation War, Sheikh Hasina and her family were interned in a house in Dhaka. On Jul 27, 1971 her first child, Sajib Wazed Joy was born. Her second child Saima Wazed Hossain was born on Dec 9, 1972.

After assassination of her parents in 1975, Sheikh Hasina and her family were offered political asylum in India, where she stayed till 1981 when she was elected president of the Awami League in absentia. She came back to the country on May 17, 1981 when she was greeted by a mammoth crowd that extended from the Airport to Farm Gate and Manik Miah Avenue where she addressed a public meeting.

In 1996, 21 years after her father was assassinated, she led the Awami League to power and became the Prime Minister. In 2008, she led the Grand Alliance to an overwhelming victory acquiring 90 percent of parliament seats in the general elections. She was elected the Prime Minister on Jan 5, 2014 for the second time in a row.

Sheikh Hasina assumed office of the Prime Minister for the third consecutive term with a thumping victory in the general elections in December 2018.

On Aug 21, 2004, Sheikh Hasina, who was the then Leader of the Opposition for the second time, barely escaped an attempt on her life as grenades were lobbed at her public meeting on Bangabandhu Avenue in the capital. Although she survived the attack, at least 24 of those attending the meeting died and over 200 were injured, many of them Awami League leaders.

Her most recent role in extending humanitarian support to over 1.1 million forcibly displaced Rohingyas from Myanmar, who have taken shelter in Cox’s Bazar, drew accolade from global leaders, institutions and eminent personalities.

Asiatic Society of Kolkata honoured Prime Minister Sheikh Hasina with the prestigious “Tagore Peace Award 2018” in recognition of her contribution to maintaining regional peace and prosperity.

President of Kolkata Asiatic Society Professor Isha Mohammed handed over the award to Sheikh Hasina at a function at Taj Mahal Hotel in the Indian capital on Oct 5, 2019.

She also received the prestigious ‘Vaccine Hero’ award given in recognition of Bangladesh’s outstanding success in vaccination. Global Alliance for Vaccination and Immunisations (GAVI) handed over the award to the premier at a ceremony at the Conference Room of the UN Headquarters in New York during the 74th UNGA in 2019.

The premier was conferred with the award ‘Champion of Skill Development for Youth’ for Bangladesh’s great success in youth skill development. The United Nations Children’s Fund (UNICEF) conferred the award on the premier at a ceremony at Labouisse Hall of UNICEF House in the UN Plaza on Sep 26 in 2019. UNICEF Executive Director Henrietta Fore handed over the award to the PM amid thunderous clapping of the audience.

The award was conferred upon Prime Minister Sheikh Hasina in recognition of her commitment to a close and mutually satisfying India-Bangladesh relations, welfare of her people, particularly women and children, and international peace and cooperation.

Chief Adviser of the Dr Kalam Smriti International Advisory Council Ambassador TP Sreenivasan handed over the accolade through a ceremony at the Prime Minister’s Office in Dhaka on Sep 16, 2019.