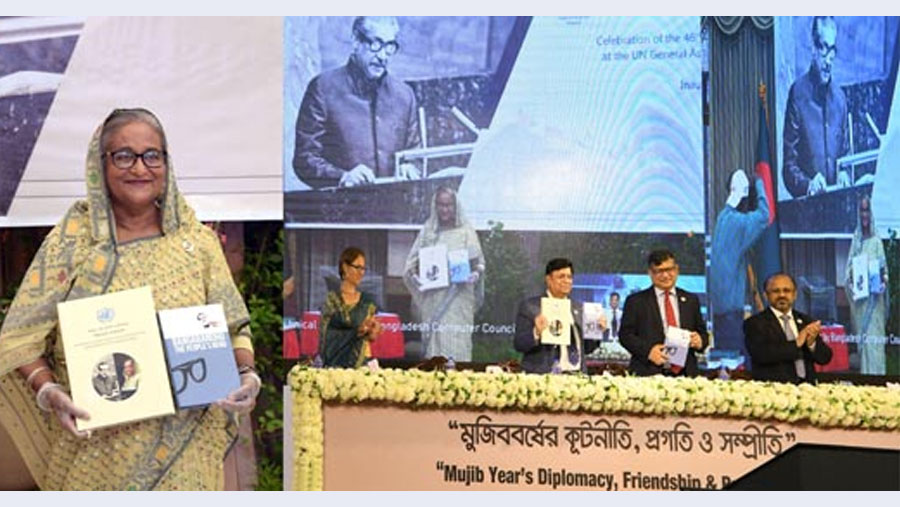 Prime Minister Sheikh Hasina on Friday (Sep 25) asked the Bangladeshi diplomats to pursue economic diplomacy alongside political diplomacy to give a boost to the country’s trade and commerce.

“The duty of diplomatic missions has changed in today’s world. Now economic diplomacy has surfaced alongside the political one. We have to pursue diplomacy in such a way that we can boost up the country’s trade and commerce and achieve economic self-dependency by working together with all (of the world),” she said.

She simultaneously stressed the need for working in unison to maintain peace on the globe.

The PM made the remarks while addressing a commemorative meeting virtually marking the 46th anniversary of delivering maiden speech in the UN in Bangla by Father of the Nation Bangabandhu Sheikh Mujibur Rahman in the United Nations General Assembly (UNGA).

The premier also inaugurated the newly constructed Foreign Service Academy Building and unveiled cover of two books: “Bangabandhu, Sheikh Hasina, and the United Nations: Bangladesh at the World Stage” and “Bangagandhu: The People’s Hero” published by the Foreign Ministry, at the same function.

Mentioning that all are dependent on one another in the world, she said, “We expect assistance from all. Likewise, if any country needs help from us, we are ready to do so.”

Turning to the Covid-19 pandemic, the premier said, “I wish the world will get relief from the coronavirus pandemic and the wheels of the economy will again start functioning and thus all can live their normal life. And for that reason the entire world should work together.”

In the function, Rector of the Foreign Service Academy Ambassador Syed Masud Mahmood Khundoker made a brief presentation on the newly constructed building.

Two audio-visual presentations were screened on Father of the Nation Bangabandhu Sheikh Mujibur Rahman’s maiden speech in the UNGA delivered in Bangla and Bangabandhu’s first office in Sugandha depicting the early days of the government of Bangladesh as a nascent state was also made at the function.

The PM wished that the Foreign Ministry would be more efficient and achieve more success in the diplomatic arena in the days to come.

She said the newly built Foreign Service Academy will impart training not only to the diplomats but also the concerned officials and employees.

Regarding September 25,2974, she said, “This is a historically important day for us. Father of the Nation Bangabandhu Sheikh Mujibur Rahman gave the maiden speech before the UNGA in Bangla as Prime Minister of a newly independent country.”

The PM said that if anyone goes through the Bangbandhu’s speech at the UNGA, he or she will find it still relevant for today as the world is now working for changing the lot of the people affected in natural calamities, ensuring justice and socio-economic development of the people.

In the speech, Bangabandhu also called for togetherness of the entire world to save the people from various pandemic diseases, she said.

The premier said the most important thing that Bangabandhu gave the nation was the foreign policy – “friendship to all, malice to none”, adding that her government has been working with the policy since assuming office.

“We are heading towards the socio-economic development of the country’s people with maintaining friendship to all,” she continued.

In this context, she said it is necessary to take help from others for the country’s development as the world is now a global village.

The PM said it was truly a matter of astonishment that the Bangabandhu government had done such a huge work in only three and a half years, adding, “It was a great success for us to acquire membership in the United Nations. Not only that, Bangladesh had also achieved recognition from 126 countries and all the international organizations including OIC and Commonwealth during the regime of Bangabandhu.”

Mentioning that Bangladesh wants to maintain peace in the world, Sheikh Hasina said the country’s armed forces and police have been deployed in the UN peacekeeping missions in many troubled countries and they played a significant role in restoring peace there.

Regarding facing natural calamities due to geographical location, she said Bangladesh is a small area of 54,000sq miles with a huge population and it has to face natural disasters like flood, cyclone and tidal surge regularly alongside manmade disasters.

The government has considered its huge population as resources as Bangladesh doesn’t have many resources, she continued.

About the Covid-19 pandemic, the premier said her government has taken various measures including declaring a 31-points guideline and various special stimulus packages to offset the impact of the disease on the country’s economy and life and livelihoods of the people.

“We have given the highest importance to food production as the world may experience famine due to the coronavirus,” she said, asking all concerned to take prompt measures for increasing the production of foods so that Bangladesh in no way faces the famine.

Despite taking various measures, the premier said, the government was not able to achieve the desired target of over 8.2 percent growth in the GDP due to the pandemic.

The country has achieved 5.64 percent GDP growth, she said and hoped to achieve much more in the coming days.

Sheikh Hasina said they have achieved dignity in the global arena as Bangladesh became independent under the dynamic leadership of Father of the Nation Bangabandhu Sheikh Mujibur Rahman after the Liberation War in 1971.

She, however, said Bangladesh lost its dignity with the assassination of the Father of the Nation along with most of his family members.

The premier said her government has been tirelessly working to materialize the dream of the Father of the Nation as he brought the country’s independence to bring smile on the faces of the distressed people.

“Our promise is to give every man a decent life,” she said, adding that none will remain homeless after the “Mujib Barsho” marking the birth centenary of the Father of the Nation.