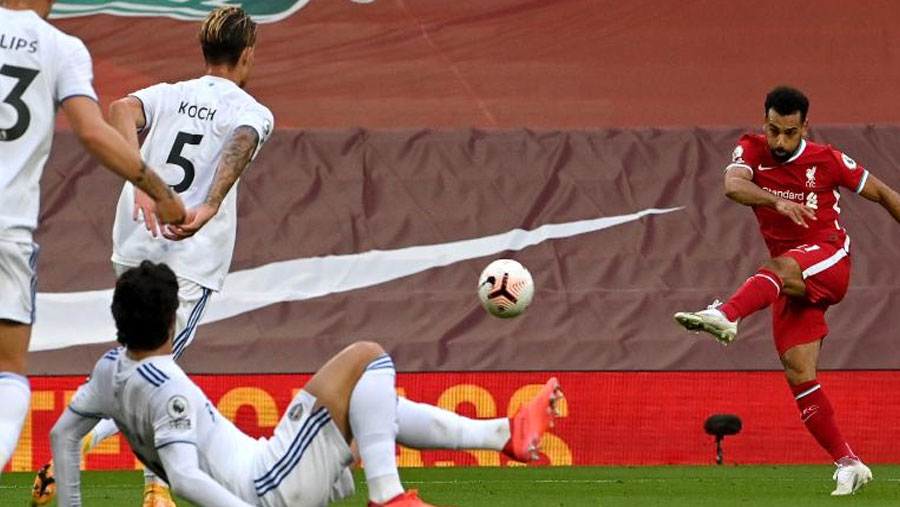 Mohamed Salah scored a hat trick to secure a 4-3 victory for English Premier League champion Liverpool in a breathtaking opening day match with Marcelo Bielsa's Leeds United side at Anfield on Saturday (Sep 12).

Leeds United made a dramatic return to the Premier League after a 16-year absence as they produced a magnificent display only to lose to a late penalty in a thriller against champions Liverpool at Anfield.

Liverpool, back in action after winning their first title in 30 years, led three times but were pegged back on each occasion by Marcelo Bielsa's fearless side before this superb match was settled by hat-trick hero Mohamed Salah's spot-kick.

Leeds looked to be leaving Anfield with a fully deserved point only for new striker Rodrigo, on as a substitute, to produce a shocking challenge on Fabinho in the 88th minute, leaving Salah to give Liverpool victory after a serious scare.

Salah made it a nightmare start for last season's Championship winners when he drilled home a penalty in the fourth minute after his shot was handled by another Leeds new boy, Germany defender Robin Koch.

Leeds produced the perfect response as Jack Harrison drilled a low right-foot shot past Alisson only for poor defending to allow Virgil van Dijk to restore Liverpool's advantage as he headed in Andy Robertson's corner.

Van Dijk was badly at fault when he gifted Patrick Bamford Leeds' second before a searing strike from Salah completed the scoring in a chaotic first half.

In a game which also contained four disallowed goals, Leeds were not to be brushed aside and were level again after 66 minutes when a perfect first touch and volley from Mateusz Klich flashed past Alisson.

Man of the match Salah had the final word, however, after that reckless late challenge from Rodrigo.