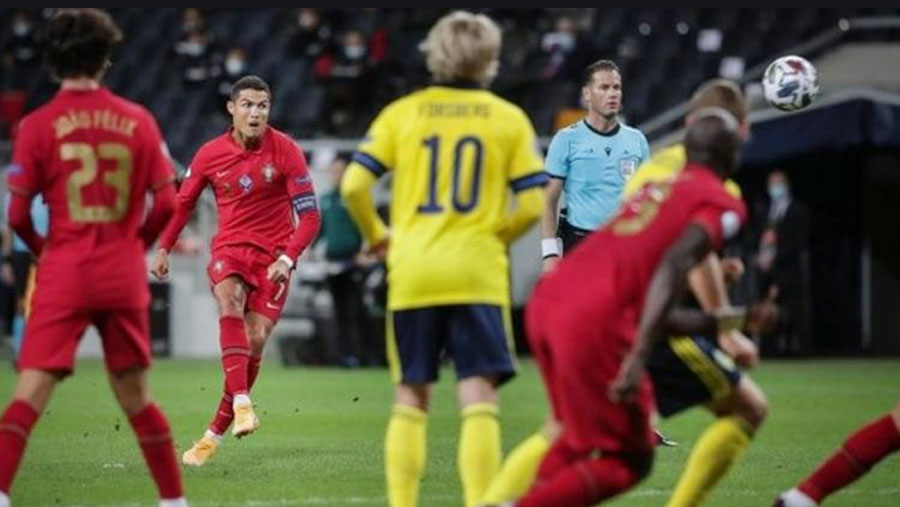 Portugal's Cristiano Ronaldo became the first European to score 100 international goals in men's football and then passed that mark with both goals in the UEFA Nations League win over Sweden.

The captain curled a stunning free-kick into the top corner – the 57th of his career – to reach the landmark. The Juventus forward, 35, then fired in a fine second from outside the box.

Ronaldo, who played 81 minutes, is within eight goals of the world record.

Iran's Ali Daei – the only man to score more international goals than Ronaldo – hit 109 during his playing career from 1993 to 2006. The next top scoring current players are – India's Sunil Chhetri (72) and Argentina's Lionel Messi (70).

Their task was made easier when Sweden had Gustav Svensson sent off for two bookings – but there was a downside to their win as Bernardo Silva was replaced after suffering a suspected muscle strain.

Portugal could have won by more with Bruno Fernandes hitting the bar and Ronaldo, on his 165th cap, forcing a good save from Robin Olsen as he searched for a hat-trick.

Almost half of CR7's international goals have come since his 30th birthday – 49 goals in 47 games.