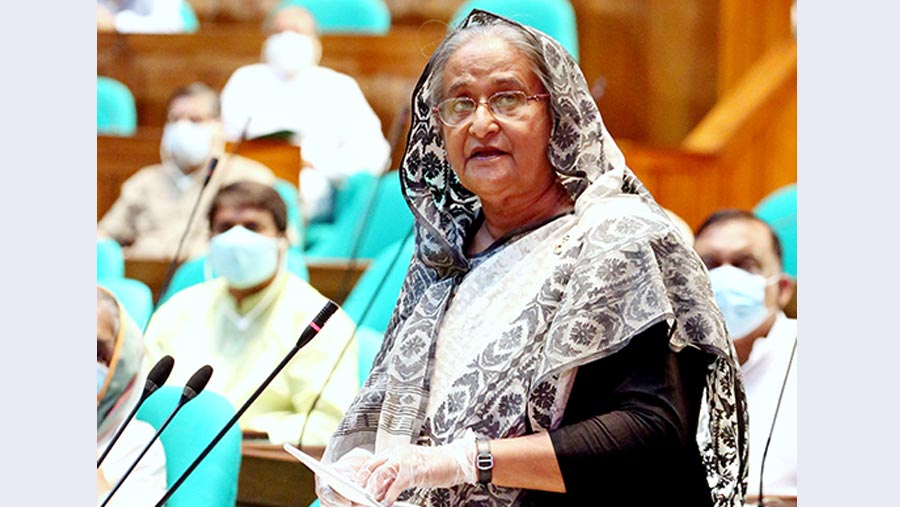 Prime Minister and Leader of the House Sheikh Hasina on Sunday (Sep 6) asked the authorities concerned to unearth the reason behind the deadly explosion at a mosque in Narayanganj on Friday (Sep 4) night that caused multiple deaths and injuries.

“I directed the cabinet secretary and other authorities concerned to find out the reason behind the blast in a mosque of Naraganganj,” she told the Jatiyo Sangsad while taking part in a discussion on an obituary motion.

Speaker Dr Shirin Sharmin Chaudhury moved the obituary motion at the opening sitting of the 9th session of the eleventh Jatiyo Sangsad on the deaths of former Indian President Pranab Mukherjee, two incumbent lawmakers — Advocate Sahara Khatun and Md Israfil Alam — and other eminent personalities who died since the prorogation of the 8th session of the current parliament, local media reported.

The premier hoped that the fact behind the explosion in the mosque would definitely come out as a probe team regarding the matter has already been formed and it is working to investigate why and how the tragic incident happened.

“Experts have visited the place of occurrence and samples are being collected to this end,” she added.

The Leader of the House also directed all to find out the fact whether the explosion took place due to irregularities on giving permission of a mosque to a gas pipe line or the mosque having the proper power connection as it has six air-conditioners at such a small place.

“Six air conditioners were installed at such a small place (mosque). Besides, the mosque has been said to be built on a gas pipe line. Usually, no construction on a gas pipe line is allowed. Has RAJUK given permission? None can give such permission having all time risk of happening such an incident. It is being investigated now,” she said.

The premier asked the authorities concerned to look into the matter whether air conditioners are being connected at mosques across the country in an unplanned way or the mosques are being built at unauthorized places.

She went on saying, “It is very necessary to look into the matters. Otherwise, such accidents could happen any time.”

Describing the explosion in a mosque as a matter of sorrow, the premier said that her government has taken every possible measure to provide better treatment to the burn injured people, saying that she is exchanging messages about the updates of the injured people with Dr Samanta Lal Sen, chief coordinator of Sheikh Hasina National Burn and Plastic Surgery Institute.

The premier prayed for eternal peace of the departed souls and conveyed profound sympathy to the bereaved families. She also wished early recovery of the injured.

So far 25 people out of 50, who suffered severe burn injuries in the blast at Baitus Salah Jame Mosque at Fatulla in Narayanganj on Friday night, succumbed to their wounds at Sheikh Hasina National Institute of Burn and Plastic Surgery in the capital.