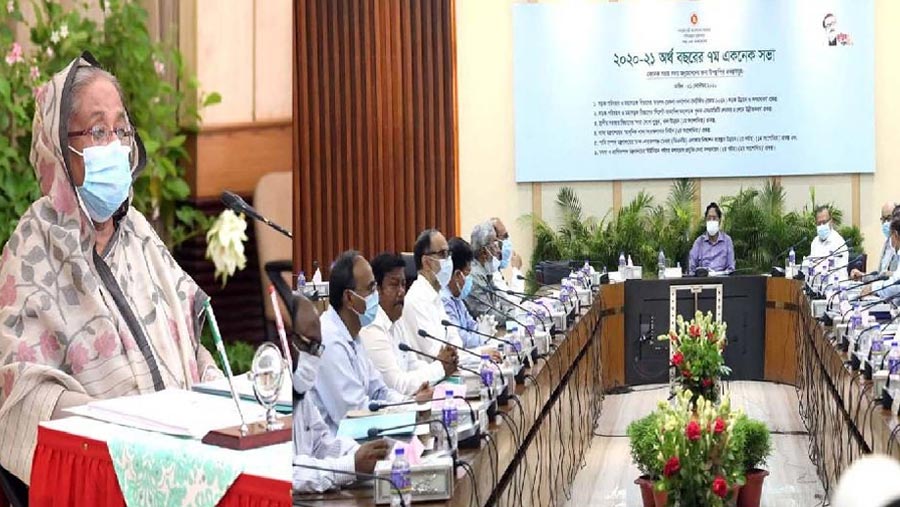 The Executive Committee of the National Economic Council (ECNEC) on Tuesday (Sep 1) approved a project for upgrading Sylhet-Tamabil highway into four-lane, including a separate SMVT, involving an estimated cost of Tk 3,586.04 crore to boost Bangladesh’s trade and commerce, export and import by establishing sub-regional road connectivity with India, Bhutan, Nepal, Myanmar and China.

The approval came from a meeting of the ECNEC held with its Chairperson and Prime Minister Sheikh Hasina in the chair. The premier presided over the meeting virtually form her official Ganobhaban residence while concerned ministers, state ministers and secretaries joined the meeting from the NEC Conference Room in the city’s Sher-e-Bangla Nagar area, local media reported.

Briefing reporters after the meeting, Planning Minister MA Mannan said that a total of six projects were approved today involving an overall estimated cost of Tk 6,628.99 crore. “Of the total project cost, Tk 2,071.10 crore will come from the government of Bangladesh while Tk 4,593.89 crore as loan assistance,”

Of the approved six projects, two are new while four are revised projects.

The planning minister said that the Department of Roads and Highways will implement the Sylhet-Tamabil Highway Upgradation project by June 2025 to be implemented at Sylhet Sadar, Dakshin Surma, Jyointapur and Gowainghat upazilas.

“This highway upgradation project will establish cross-border connectivity, ease communication with the land port, economic zone and export processing zone as well as promote tourism,” he said, adding that the Asian Infrastructure Investment Bank (AIIB) will extend Tk 2,970.55 crore as loan assistance for the project.

The project will also pave the way for boosting Bangladesh’s export-import as well as trade and commerce with the South and East Asian countries, especially with India’s Asam and Tripura, Mannan said.

The planning minister also reiterated that the government has a plan to upgrade all the inter-district, and national highways into four-lane.

The planning minister said Prime Minister Sheikh Hasina in the meeting asked the authorities concerned to put more emphasis on creating awareness for planting trees side by side directed the Department of Fisheries to promote production and protection of fisheries in the haor areas.

Answering to a question, Mannan said development projects need amendments due to various reasons like the unexpected situations of Covid-19, natural disasters and there are also many issues which are out of the control of the government.

“But, we’re very much aware of the issues and trying to reduce the tendency of project revision through raising awareness, imparting training to the concerned staff and also through technology,” he added.

The planning minister told another questioner that the draft Sheikh Hasina Flyover project in Sunamganj would be a beautiful project and it would play an important role to connect Netrakona, Sunamganj and Sylhet through roads and flyovers.

He informed that the project would link Sunamganj’s Jamalganj, Dharmapasha and Tahirpur upazilas with Netrakona, Sylhet through improved road connectivity featuring flyovers.

“Once the project is implemented, that area will take part in boosting the country’s GDP growth,” he added.