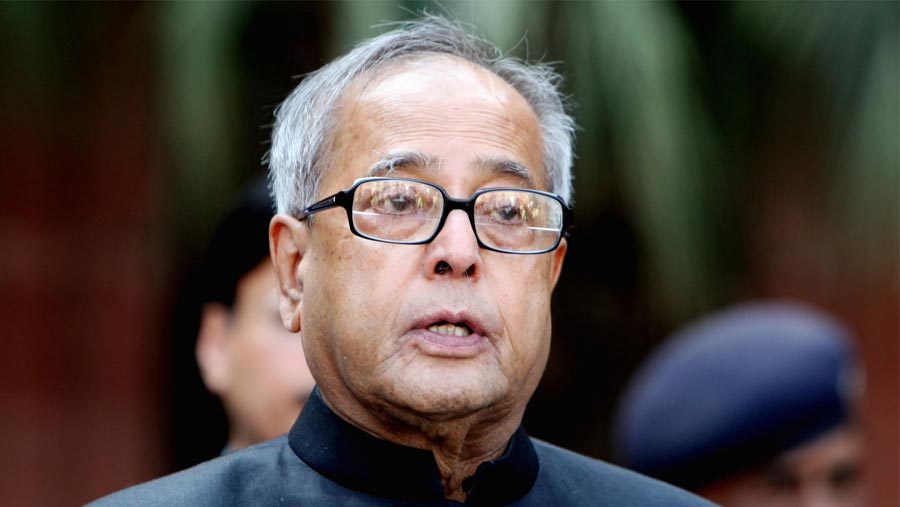 India's former president Pranab Mukherjee has died, 21 days after confirming that he had tested positive for the novel coronavirus. The 84-year-old was in hospital to remove a clot in his brain, when it was discovered he also had Covid-19.

His son Abhijit confirmed the the news in a tweet.

Before serving as president between 2012 and 2017, Mr Mukherjee held several important portfolios during his 51-year political career. These included the finance, foreign and defence ministries.

A man of humble origin, Mukherjee was born in the small village of Mirati in Birbhum District of West Bengal as son of freedom fighters, KamadaKinkar Mukherjee and Rajlakshmi on Dec 11, 1935.

His father was a Congress leader who endured great hardship including being sent to jail several times for his role in India’s struggle for independence.

Pranab Mukherjee assumed office as the 13th President of India on Jul 25, 2012, crowning a political career of over five decades of exemplary service to the nation in government as well as parliament.

Mukherjee was a man of unparalleled experience in governance with the rare distinction of having served at different times as minister for foreign affairs, defence, commerce and finance.

During the period 2004-2012, Mukherjee was instrumental in spearheading critical decisions of the government on a range of issues such as Administrative reforms, Right to Information, Right to Employment, Food Security, Energy Security, Information Technology and Telecommunication, setting up of UIDAI and Metro Rail through Chairmanship of over 95 Groups of Ministers constituted for the purpose, according to his official biography.

A powerful orator and scholar, Mukherjee’s intellectual and political prowess as well as remarkable knowledge of international relations, financial affairs and parliamentary process are widely admired.

He has been acclaimed for his role as a consensus builder on difficult national issues through his ability to forge unity amongst the diverse political parties that form part of India’s vibrant multi-party democracy.

Mukherjee acquired a Master’s degree in History and Political Science as well as a degree in Law from the University of Kolkata. He then embarked on his professional life as a college teacher and journalist.

Inspired by his father’s contribution to the national movement, Mukherjee in 1969 plunged into full time public life following his election to the Upper House of the Parliament (Rajya Sabha).

Under the careful mentoring of late Prime Minister Indira Gandhi, Mukherjee’s rise in his political career was rapid. He was made Deputy Minister for Industry; Shipping and Transport, Steel and Industry and Minister of State for Finance in the period 1973-74.

He assumed office as Finance Minister of India for the first time in 1982 in the Cabinet of Prime Minister Indira Gandhi and was the Leader of the House in the Upper House of Parliament (Rajya Sabha) from 1980 to 1985.

He was the Minister of Finance from 2009 to 2012 and Leader of the Lower House of Parliament from 2004 to 2012 till he resigned to contest election to the office of the President.

He led the Indian delegations to the Commonwealth Finance Ministers’ Conferences in 1982, 1983 and 1984; the United Nations General Assembly in 1994, 1995, 2005 and 2006, the Conference of Commonwealth Heads of Government at Auckland in 1995, the Non-Aligned Foreign Minister’s Conference at Cartagena in 1995 and the Conference to mark the 40th anniversary of the Afro-Asian Conference in Bandung in 1995.

A prolific reader, Mukherjee has authored several books on the Indian Economy and on Nation Building.

He was conferred many awards and honours including India’s second highest civilian award, Padma Vibhusan in 2008, the Best Parliamentarian Award in 1997 and Best Administrator in India Award in 2011.

He was conferred Doctor of Laws Honoris Causa from a number of universities across the world including the University of Dhaka and was rated one of the best five Finance Ministers of the world in 1984 by “Euro Money” and was declared ‘Finance Minister of the year’ for Asia in 2010 by “Emerging Markets”, the journal of record for the World Bank and the IMF.

Mukherjee was married to late Suvra Mukherjee, an accomplished singer of Rabindra Sangeet and an artist. He has two sons and a daughter.

Bangladesh Government has announced one day National Mourning on Wednesday, (Sep 2), in honour of the memory of former Indian President Pranab Mukherjee. The national flag will be flown half- mast on that day.