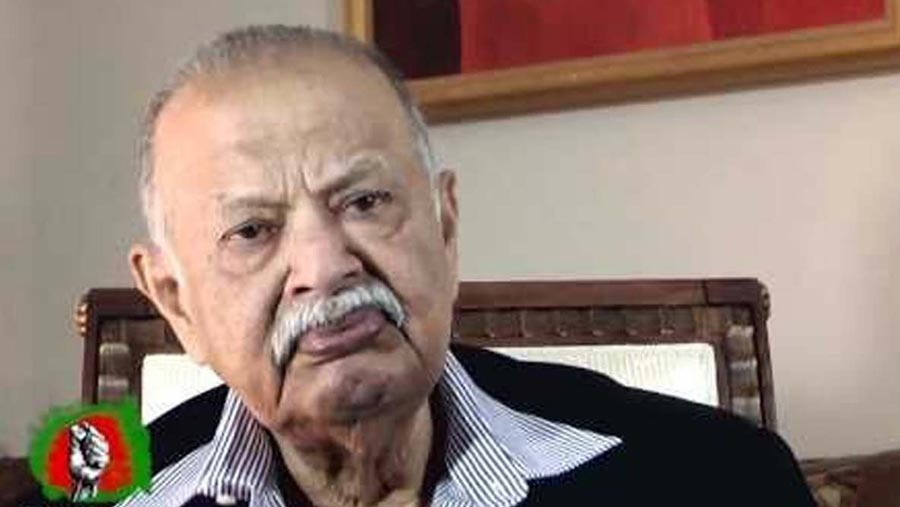 The body of Chitta Ranjan Dutta, Bir Uttam, widely known as CR Dutta, commander of sector number four during the Liberation War, is scheduled to reach Dhaka Monday (Aug 31) morning from the USA where he passed away on Aug 25.

An Emirates flight left for Dubai from Florida with Dutta’s coffin on Saturday while his daughter Barrister Chayanika Dutta will accompany his body back to Bangladesh from Dubai.

The war hero’s US expatriate eldest daughter Mahua Dutta, son Chiranjeeb Dutta and youngest daughter Kabita Dasgupta have left New York for Dhaka on a Qatar Airlines flight on Saturday night. They are scheduled to reach Dhaka on Monday.

Preparations are being taken to hold his last rituals with full state and military honor after bringing back his body from Florida in the USA by an Emirates Airlines flight, said a press release singed by General Dutta National Citizens’ Committee Coordinator Rana Dasgupta.

A 1001-member national citizens’ committee was formed with Major General (retd) KM Shafiullah, one of the sector commanders during the Liberation War, as convener and journalist Shahriar Kabir as member-secretary to pay last tributes to Bir Uttam CR Dutta in proper manner.

CR Dutta, Bir Uttam, passed away at a Florida hospital in the USA at around 9 a.m. (Bangladesh time) on Aug 25 at the age of 93.

Earlier on Aug 20, Dutta fell in the bathroom and broke his leg. He was admitted to a hospital in Florida, the USA after his condition deteriorated. Dutta had also been suffering from various incurable diseases.

Dutta was born on Jan 1, 1927 in Shillong, Assam. His ancestral home is in Mirashi village of Chunarughat upazila of Habiganj. He joined the Pakistan Army in 1951 and a few days later, he was commissioned as ‘second lieutenant’. The then Pakistan government rewarded him for his courageous contribution to the 1965 Indo-Pak war, the first battle of his military life.

In 1971, Colonel MAG Osmani, the commander-in-chief of the Liberation War, appointed Dutta as the commander of Sector 4. He made important contributions after being appointed as Brigade Commander in Rangpur in 1972.

In 1973, the government felt the need to form a border guard force for independent Bangladesh and gave the responsibility to him in this regard.

He later formed a border guard force and it was named Bangladesh Rifles. At present, the name of this force is Border Guard Bangladesh.

He was awarded the title of Bir Uttam for his valiant contribution to the great Liberation War. The city road from Katabon to Karwan Bazar Signal was named after Bir Uttam CR Dutta.