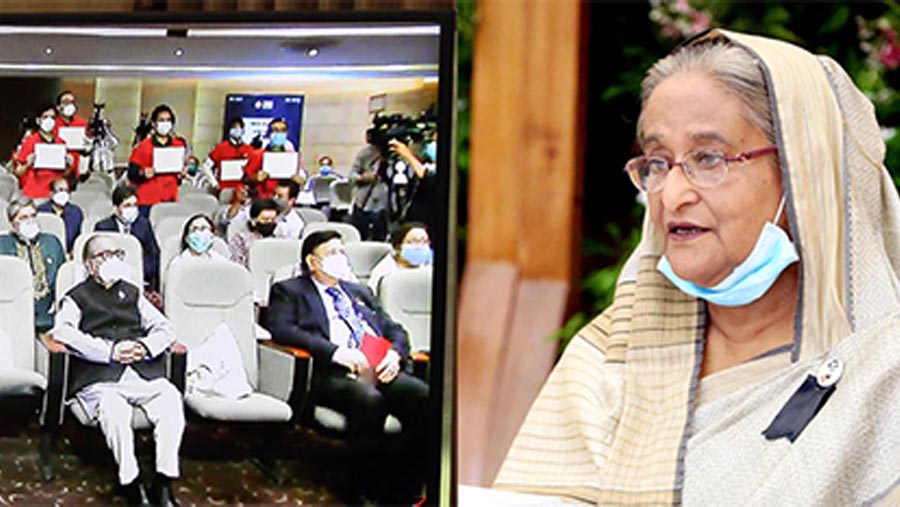 “Many people want to say many things about the formulation of the Six-Point Demand. But, I know personally that it (Six-Point Demand) was the outcome of the sole thought of Bangabandhu,” she told the prize-distribution ceremony of an online quiz competition marking the Historic Six-Point Demand Day.

Bangabandhu’s birth centenary celebration national implementation committee organized the ceremony at the International Mother Language Institute (IMLI) while the premier joined it from her official residence Ganabhaban through a videoconference, local media reported.

Speaking at the function as the chief guest, the premier recalled that Mohammad Hanif (former mayor of Dhaka City Corporation) knew the fact as he had typed the Six-Point Demand when he was a personal assistant of Bangabandhu in Alfa Insurance Company in which Bangabandhu joined in 1960 to mainly maintain communication with his party leaders and activists.

Highlighting the background of formulation of the Six-Point Demand, the premier said that during the Indo-Pak war in 1965, the people of East Bengal or East Pakistan remained totally unprotected as there was no importance to the central government of Pakistan for protecting this region.

“We always remained unprotected totally (during the Indo-Pakistan war). So, Bangabandhu took the decision to formulate the Six-Point Demand,” she said.

Citing the disparity between the erstwhile East Pakistan and the West Pakistan in all the sectors, particularly in the civil and military jobs, Sheikh Hasina said the larger chunk of the revenue used to come from Bangladesh, but its lion share was used to spend in (West) Pakistan.

“Bangabandhu raised the issues of disparity and deprivation time and again and struggled against it and we earned independence marching alone the way of his struggles,” she said.

In this context, Sheikh Hasina said that Bangabandhu tried to place the Six-Point Demand in Lahore conference on Feb 5 in 1966, but he was barred from doing that.

“Bangabandhu returned to Dhaka (on Feb 11, 1966) and highlighted the six-point demand briefly before the journalists at the airport,” she said.

The premier said the Six-Point Demand that had proposed to give self-autonomy to every province of Pakistan was adopted at the working committee of the Awami League and subsequently passed by the party’s national congress.

She mentioned that Bangabandhu later took initiatives to publicise the Six-Point Demand across the country and started holding meetings one after another.

“Bangabandhu was arrested time and again and implicated in cases in every district where he went to arrange meetings in favour of the demand,” the premier said.

Sheikh Hasina, elder daughter of Bangabandhu, said when Bangabandhu returned to Dhaka after staging the last meeting at Adamjinagar, Narayanganj on Six-Point Demand, police arrested him from her Dhanmondi residence.

“Not only Bangabandhu, numerous party leaders were picked up by the police, and protesting it, the people launched a massive movement across the country,” she added.

Chairman of Bangabandhu’s birth centenary celebration national implementation committee National Professor Dr Rafiqul Islam, who gave vote of thanks, handed over cheques and certificates signed by the premier among first three winners of the competition on behalf of the Prime Minister.

Some other participants among 100 winners got connected from 35 offices of deputy commissioners (DCs) across the country.

A total of 1,09,929 participants from across the country took part in the competition.

Of the participants, the first prize winner of the quiz competition, Imtiaz Pasha, a student of Public Administration Department of Dhaka University, and the fifth prize winner, Khuku Rani, a teacher of Khulna Railway Girls School, shared their experiences with the audiences on behalf of the participants.

The theme song of the “Mujib Borsho” and a documentary on the Six-Point-Demand (Charter of Freedom of the Bangalee) which was announced by Father of the Nation Bangabandhu Sheikh Mujibur Rahman on Jun 7 in 1966, were screened on the occasion.

The PM said Bangbandhu declared the historic Six-Point Demand which had appeared before the Bangalees as their demand of freedom at that time and they had taken it as a right to live.

“This was a rare instance (in the world) that the people had received a demand (the Six-Point Demand) in such a way and shed blood for (implementing) it. It was possible only by the Bangalees,” she said.

She said that the Six-Point Demand in phases turned into a one point demand to liberate the country from the Pakistani rulers.

Sheikh Hasina said Bangabandhu Sheikh Mujib on Jan 18, 1968 was taken to Dhaka Cantonment from Dhaka Central Jail after being arrested in a case titled ‘Agartala Conspiracy Case’ framed by the Pakistani government against Bangabandhu and 34 other civil and military officers and persons.

But the people of Bangladesh burst into protest against the case, she said, adding that Chattra Sangram Parishad waged movement in a united manner transforming it into a mass upsurge.

The PM said Ayub Khan was compelled to withdraw the case on the face of mass movement on Feb 21, 1969. And Bangabandhu Sheikh Mujibur Rahman was released from the jail on Feb 22, 1969, she added.

Sheikh Hasina said after the arrest of Bangabandhu and other front-ranking AL leaders due to announcement of the Six-Point Demand, her mother Sheikh Fazilatunnesa Mujib had played a great role in drumming up public opinion for advancement of the movement centering the demand.

“My mother always knew what my father wanted and she was very aware about those,” the premier remembered.

She said her mother used to reach the instructions of Bangabandhu to the party leaders and student society which she (Fazilatunnesa) got during her visit to Bangabandhu at the jail.

Sheikh Hasina also recalled Bangabandhu’s arrest time and again as he raised a movement to establish Bangla as the state language instead of Urdu that finally led to achieve the country’s independence in phases.

The PM said the advancement of the country had been halted with the assassination of the Father of the Nation along with most of his family members on Aug 15, 1975.

“We’ve to move ahead to build a developed and prosperous country free from poverty and hunger following the ideology of the Father of the Nation,” she said.

The premier said that the defeated forces of 1971, who wanted to foil the country’s victory, would not get any more chance to this respect.