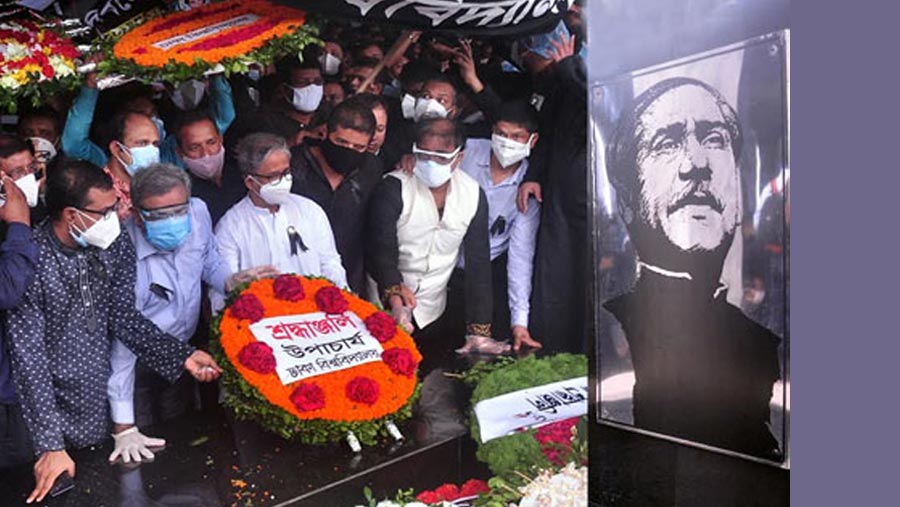 The Dhaka University (DU) authorities have observed the National Mourning Day and the 45th martyrdom anniversary of the Father of the Nation Bangabandhu Sheikh Mujibur Rahman on Saturday (Aug 15) with due solemnity. The national flag along with university and hall flags were hoisted at half-mast atop all main buildings including halls of the university, said a DU press release.

Teachers and officials of the university led by Vice-Chancellor Dr Akhtaruzzaman went to the Bangabandhu Memorial Museum at Dhanmondi-32 at 7:30 a.m. and placed wreaths at the portrait of the architect of independence. DU Pro-VC and President of Dhaka University Teachers’ Association Professor Dr. A S M Maksud Kamal, General Secretary Dr Nizamul Hoque Bhuiyan, among others, were present on the occasion.

A discussion was also held on the life and works of Bangabandhu at university’s Abdul Karim Virtual Classroom adjacent to VC’s office through virtual platform which began with screening a documentary video on Bangabandhu. Novelist Selina Hossain and politician Sheikh Shahidul Islam were present as special guests at the meeting.

Besides, special prayers were also offered at all mosques after Zohr prayer and ‘Upasanalaya’ on the campus.