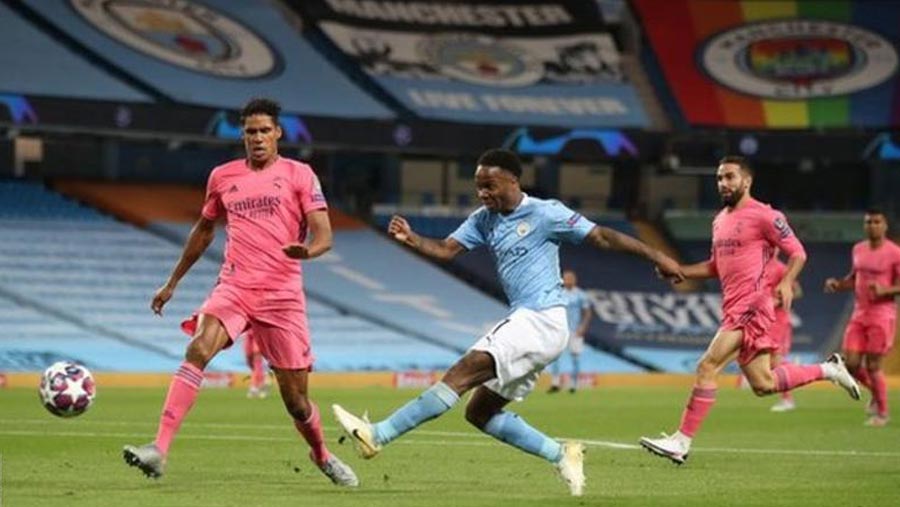 Manchester City stars Raheem Sterling and Gabriel Jesus netted in a 2-1 win (4-2 agg.) against Real Madrid to book their place in the Champions League quarter-finals. Man City boasted a 2-1 lead heading into the second leg of their round of 16 clash at the Etihad.

Manchester City finished off the job they started back in February by deservedly overcoming Real Madrid to reach the Champions League quarter-finals.

Pep Guardiola's side will now face Lyon in the one-game knockout format in Lisbon after inflicting Zinedine Zidane's first elimination from the Champions League, the French manager having won it three times in his three previous seasons in charge.

It was a victory Man City fully merited as their intense pressing game forced Real into numerous mistakes, with France World Cup-winning defender Raphael Varane in particular unable to cope with the pressing of Gabriel Jesus. He robbed Varane to set up Raheem Sterling to score in the ninth minute but Karim Benzema's towering header before half-time set up the possibility of a tense second period.

City, though, created the better opportunities in an excellent performance – whereas Real missed the leadership and nous of central defender Sergio Ramos, who was suspended after being sent off in the first leg.

Without Ramos alongside him, the uncomfortable Varane made another error when his headed back-pass fell short of Thibaut Courtois to allow the lurking Jesus to pounce in the game's decisive moment after 68 minutes.