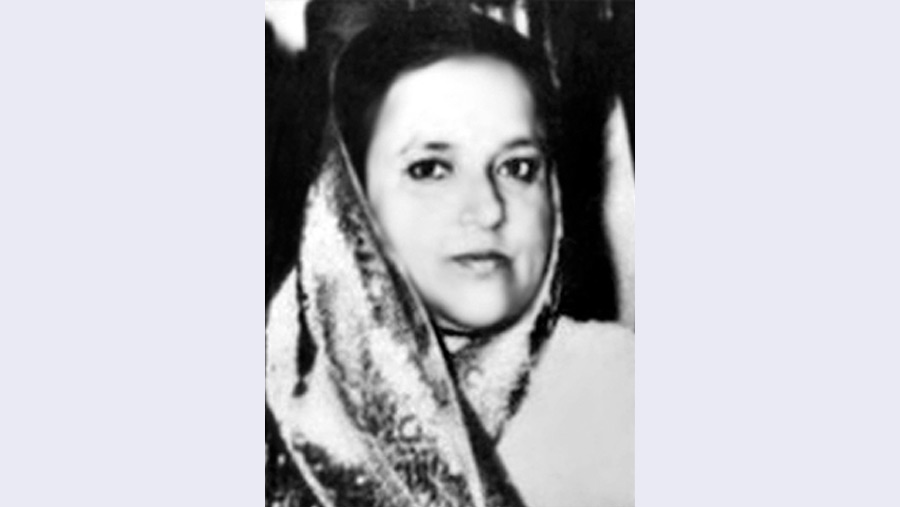 The 90th birth anniversary of Bangamata Sheikh Fazilatunnesa Mujib, wife of Father of the Nation Bangabandhu Sheikh Mujibur Rahman, will be observed today.

Born on Aug 8 in 1930 at Tungipara village in Gopalganj, she was killed brutally by the assassins of Father of the Nation on Aug 15 in 1975.

The Women and Children Affairs Ministry has taken elaborate programmes to observe Bangamata Sheikh Fazilatunnesa Mujib’s birth anniversary nationally. The theme of the day this year is – ‘Bangamata is courageous symbol of sacrifice and beauty.”

On the Bangamata’s birth day, the ministry will distribute sewing machines and money in cash through the mobile banking to the distressed women who already have been affected due to the Covid-19 pandemic.

Under the programme, a total of 3,200 sewing machines and Tk 26 lakh – Tk 2,000 each – will be given among 1,300 distressed women as per the enrolment of the beneficiaries provided by deputy commissioners of 64 districts. At the same time, 100 laptops will be given among the poor meritorious students in Goplaganj district.

The financial grant will be transferred formally to the mobile numbers of the beneficiaries by the Prime Minister through the electronic system.

On behalf of the Prime Minister, the Deputy Commissioner of Gopalganj will hand over the sewing machines and laptops among the beneficiaries.

To mark the birth anniversary, the subordinate organizations and agencies under the Ministry of Women and Children Affairs will hold discussions in coordination with all the district administration.

In addition to this, live documentaries will be screened and souvenir will be published based on the glorious working life of Bangamata. Bangladesh Television, Bangladesh Betar and other electronic media will broadcast special programme on the occasion of Bangamata’s birth anniversary.

Different social and cultural organizations including the Awami League have taken various programmes.

Of the Awami League programmes, recitation of holy Quran, Milad and Doa Mehfil will be held following paying rich tribute to the grave of Shahid Fazilatunnesa at Banani at 10 a.m.

Bangladesh Awami League and its Dhaka City North and Dhaka City South units will participate in the programme.

Awami League General Secretary and Road Transport and Bridges Minister Obaidul Quader urged all leaders and workers of the ruling party and its associate bodies to observe the Bangamata Sheikh Fazilatunnesa Mujib’s birth anniversary in a befitting manner.