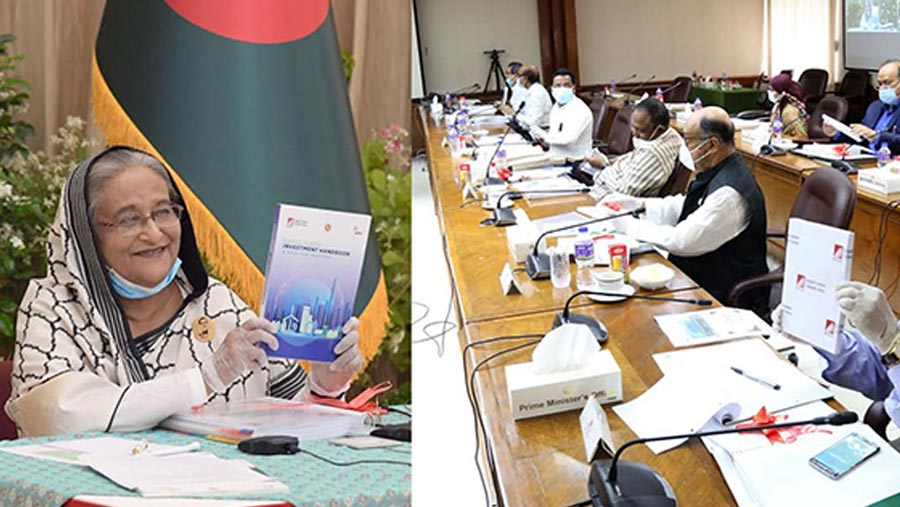 “We want to take our economy forward further and make our investment atmosphere more attractive. So, we’ve to give more attention to this matter and also work hard to attain this goal,” she said.

The PM said this while delivering her introductory speech at a meeting of the governing body of Bangladesh Investment Development Authority (BIDA) through a videoconference from her official Ganabhaban residence in the morning, local media reported.

About the coronavirus impact on the investment and economy in the country, the PM said all the nations of the world are facing the same problem.

“We’ve to advance by combating this problem. We’ve to bring more investment... we’ve (huge) population and created many facilities including development of lands for investors,” she said.

“So we’ve to work hard to make the investment atmosphere more attractive by utilising these facilities to build ‘Shonar Bangla’ as dreamt by Father of the Nation Bangabandhu Sheikh Mujibur Rahman,” she added.

The PM said Bangladesh achieved 8.1 percent GDP growth and was on the way to attain 8.2 percent. “Unfortunately, the coronavirus has stalled this progress.”

But we should not stop here... we’ve to work amid this situation and we’ve to take measures so that investment comes to the country,” she said.

Spelling out her government’s steps for attracting more investment in the country and making trade and business easier, the prime minister said her government is setting up 100 special economic zones across the country so that local and foreign entrepreneurs can make investment there easily.

“We’re establishing these economic zones so that the entrepreneurs don’t face problem for land in setting up mills and factories and development is not made only at a single place,” she added.

The premier said the government has offered tax holiday facilities to the investors, while it’s giving tax rebate for accelerating industrialization in the country.

Sheikh Hasina said her government is also taking various steps, including waiving interest on the import of capital machineries to woo more investment.

“We’ve made arrangements for training to create skilled manpower and we’re making these arrangements in every upazila,” she said.

“Bangladesh witnessed a severe crisis of electricity in the past, but the country has surplus power now thanks to various pragmatic steps of our government,” she said.

Sheikh Hasina said the crisis of gas is going to end and the government is importing LNG to solve this problem.

She said the Awami League in its election manifesto declared Digital Bangladesh in 2008 for attracting more investment and making trade and business easy.

The PM said two committees – one led by the finance minister and another by the cabinet secretary – have been formed to reform and make easy the activities related to trade and business.

“Beside, the BIDA has published a guide book for investors,” she said, adding the book contains all information related to making investment in Bangladesh.

“Due to these measures, local and foreign investments have increased in the country to a great extent and the country started witnessing its results,” she said.

The PM said the BIDA had planned to organise the Bangabandhu International Investment Summit in Bangladesh in the Mujib Borsho.

“In the present situation it’s not possible to arrange this summit. But it could be organised virtually,” she said.