Kamal could give a lot to country: PM 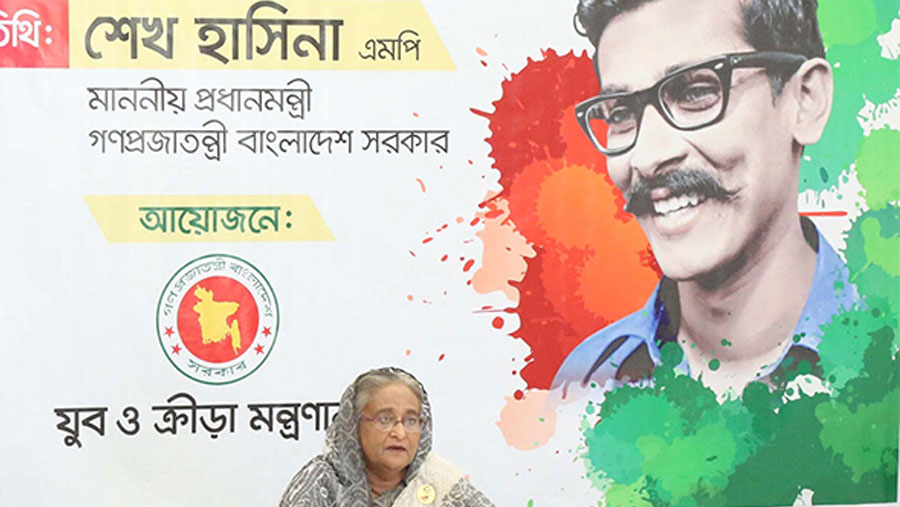 Prime Minister Sheikh Hasina on Wednesday (Aug 5) said Sheikh Kamal could give to the country much more if he remained alive as he made significant contribution to the country’s politics, culture and sports with his multifaceted brilliance.

“If Kamal (Sheikh Kamal) remained alive today he could have given the country many things. His all-round talent could have made contribution to every sector if it blossomed. He even left his contribution (in many sectors) ” she said.

She said this while joining a virtual discussion from her official residence Ganobhaban here marking the 71st birth anniversary of Shaheed Sheikh Kamal, the eldest son of Father of the Nation Bangabandhu Sheikh Mujibur Rahman.

The Ministry of Youth and Sports arranged the discussion and doa mahfil at the Jatiyo Krira Parishad Bhaban, local media reported.

The premier said, “Kamal had all-round talent. Having such multifaceted talents in a single person was truly rare.”

She added that Kamal on the one hand, was a sports organiser and had multifaceted brilliance in cultural arena on the other hand, while he had an impressive role in politics as well.

Recalling Sheikh Kamal’s contribution to politics and movements, the premier said, ” Kamal had played an active role in each of the struggle and movement since giving the six-point demand and the arrest of the Father of the Nation in Agartola conspiracy case.”

She said Kamal actively took part in the country’s Liberation War of 1971 after taking proper training.

About Sheikh Kamal’s contribution to sports, the prime minister said that the greatest contribution of Kamal in sports was to make arrangement for sports in Dhanmondi and establishing Abahani Club and made it (Abahani) stronger further after the Liberation War.

Kamal had a great passion for Abahani, the premier said, recalling Sheikh Kamal’s demand for Adidus boots for players of the football team when she went to Germany after his (Kamal’s) marriage in 1975.

Sheikh Hasina, elder sister of the Sheikh Kamal, said in an emotion-chocked voice that Kamal never used to demand anything for himself.

The prime minister said that Kamal used to sing songs, play setar and created a musical band titled “Spondon Shilpa Gosthi” through which he tried to reach the local songs to others.

Kamal had a role in establishing the Dhaka Theatre as well, she added.

She went on saying, “Kamal is no more within us now. But the Abahani and Spondon which he had established are still within us.”

She said, “Kamal was two years junior to me, but he was matured enough in knowledge, wisdom and many other qualities.”

The premier said, “Kamal had great sense of responsibility since his childhood as he helped our mother in household work from childhood.”

Among others, PM’s Private Industry and Investment Affairs Adviser Salman Fazlur Rahman, State Minister for Youths and Sports Md Zahid Ahsan Russel, State Minister for Cultural Affairs KM Khalid, member secretary of the national committee for the nationwide celebration of the birth centenary of the Father of the Nation Bangabandhu Sheikh Mujibur Rahman, Dr Kamal Abdul Naser Chowdhury, Bangladesh Football Federation President Kazi Salahiddin, and Editor-in-Charge of the Ekattor Television and member of the board of directors of the national news agency Bangladesh Sangbad Sangstha (BSS) Mozammel Babu spoke on the occasion.

Narrating the history’s most heinous killing of Father of the Nation Bangabandhu Sheikh Mujibur Rahman on the Aug 15 in 1975, the PM said they never imagined that they had to lose everyone in such a way.

“Kamal along with other members of our family were assassinated by the people with whom he worked and stayed together, including an ADC of Osmani, who was an army officer,” she continued.

She said that they (killers) used to go to their house regularly and there was none who didn’t take food and breakfast in their house, adding that they fired gunshots at Kamal and Jamal standing in front of them.

The prime minister said Bangabandhu who had sacrificed his entire life for the country’s liberation was killed by a section of army officers including Major Zia who got promotion from his government.

She said they had been deprived of justice for a long time and even were barred from returning to the homeland.

The premier said they even enacted a law so that they could not file any case regarding the assassination of the founding father of the country Bangabandhu Sheikh Mujibur Rahman, who sacrificed his entire life for the welfare of the people and the country.

After assuming office after 21 years, the Awami League took initiative to hold the trial of Bangabandhu’s killers, she continued.

The premier, however, greeted the countrymen as they have given the Awami League a chance to serve them and to hold trials of the killers of Bangabandhu and his family members.

Recalling childhood memories, she said, “We, the brothers and sisters, were playing and quarreling together. Kamal used to give me accompany during my play with dolls and I gave Kamal accompany in his play as we were close to each other in terms of age.”

The premier also said that the killers had also killed some children including 10-year old Sheikh Russell.

“My mother who always gave accompany to my father in his every work was also assassinated along with other family members,” she added.

The premier greeted the people who took part in the discussion in memory of her younger brother Sheikh Kamal marking his 71st birth anniversary.

She later unveiled the cover page of a memorial book on Sheikh Kamal’s 71st birth anniversary.