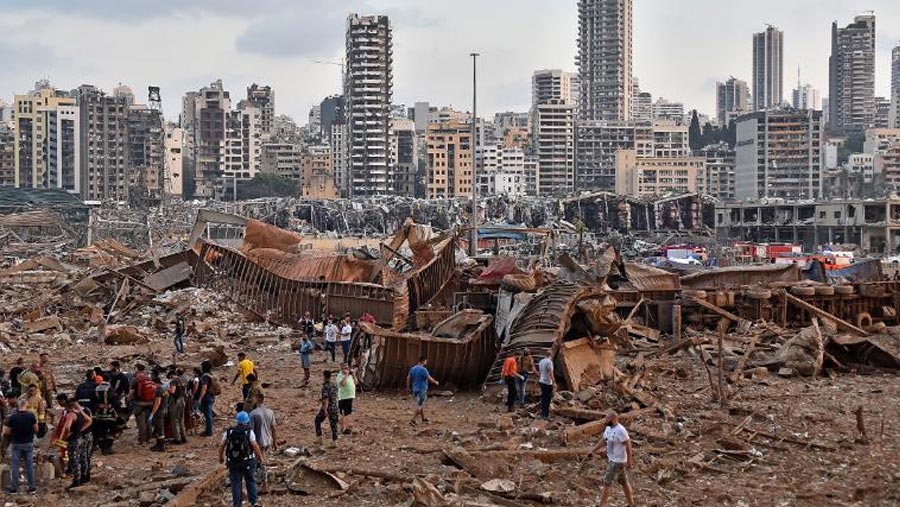 At least four Bangladeshi nationals were killed and around 100 others, including 21 Navy personnel, were injured in yesterday’s deadly explosion in Beirut, Bangladesh Embassy in Lebanon confirmed today.

Embassy’s first secretary (labour) Abdullah Al Mamun told National News Agency of Bangladesh (BSS) through WhatsApp messages that so far four Bangladeshis died, while around 100 others including 78 expatriate Bangladeshis and 21 members of Bangladesh Navy, who are on duty at Beirut port under UN peace keeping mission, were reportedly injured in the massive blast.

He said the deceased have been identified as Mehedi Hasan and Rasel from Brahmmanbaria, Mizan from Madaripur and Rezaul from Cumilla. “We are trying to get more information about the Bangladeshi expatriates residing here,” Mamun said.

The Tuesday’s explosion sent shockwaves across Beirut, claiming more than 100 lives, injuring 4,000 others and causing widespread damage as far as the outskirts of the capital.

The Bangladesh mission urged all to inform the Embassy through its hotline number:  +96781744207, if they come to know about any more casualties of the Tuesday’s devastated blast near Beirut port where a towering grain silo had been shattered.

Meanwhile, Bangladesh Ambassador to Lebanon Major General Jahangir Al Mustahidur Rahman in a video message said among the injured expatriate Bangladeshis, eight have been undergoing treatment in the hospital.

“On behalf of the embassy, we are supervising their (expatriate Bangladeshis) as well as providing them financial support,” said Bangladesh envoy in Lebanon that hosts nearly 1.5 lakh Bangladeshi nationals in different professions.

He said Prime Minister Sheikh Hasina has been taking updates from the Bangladesh mission about the wellbeing of Bangladeshi expatriates in Lebanon.

Foreign minister Dr A K Abdul Momen has also given different directives to the mission for ensuring treatment of the victims and expressed his willingness to provide medical support to Lebanon from Bangladesh, Rahman added.

Earlier, Inter Services Public Relation Directorate (ISPR) said 21 members of Bangladesh Navy, who are on duty at Beirut port under the Maritime Task Force (MTF) deployed as part of the United Nations Peacekeeping Mission, were injured in the huge blast.

One of the injured Navy personnel admitted to American University of Beirut Medical Centre in a critical condition, while others were taken to Hamoud Hospital by helicopter or ambulance under the supervision of United Nations Interim Force In Lebanon (UNIFIL).

The injured navy personnel, crew members of Bangladesh Navy’s battleship ‘BN Bijoy’, deployed at Beirut port, are now out of danger except one and they are undergoing treatment under the arrangement of UNIFIL, said the release.

Bangladesh Ambassador Major General Rahman has also visited the ‘Bijoy’ while the authorities concerned are now assessing the losses caused by the explosion under close supervision of Head of Mission and Force Commander and Maritime Taskfoce Commander of UNIFIL, said the release.

Navy ship Bijoy, that was anchored only 200 yards from the blast scene, has been actively engaged in counterterrorism, rescue and surveillance operations and providing training to Labanese Navy as part of the UNIFIL activities.

The Bangladesh Navy battleship has been participating in UN Peacekeeping Mission in Lebanon since 2010.

“Until now over 4,000 people have been injured and over 100 have lost their lives. Our teams are still conducting search and rescue operations in the surrounding areas,” the Lebanese Red Cross said in a statement today.

Residents of Beirut awoke to a scene of utter devastation on Wednesday while smoke was rising from the port, major downtown streets were littered with debris and damaged vehicles, and building facades were blown out.

It was unclear what caused the blast, which appeared to have been triggered by a fire and struck with the force of an earthquake, international media reported.