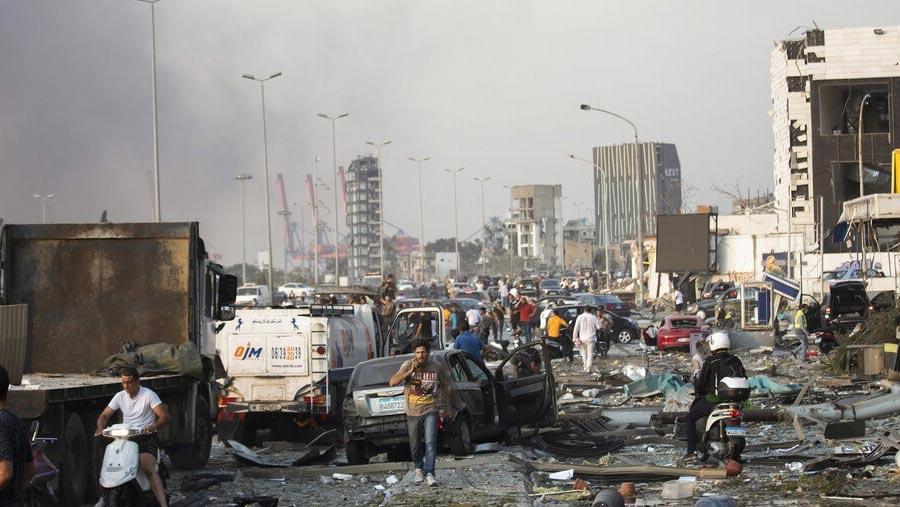 At least 100 people were killed and 4,000 injured in two massive explosions that rocked Beirut on Tuesday (Aug 4), officials said. The explosion also flattened much of the city's port, damaging buildings across the capital and sending a giant mushroom cloud into the sky, reports said. It was not clear what caused the blast.

The second blast sent an enormous orange fireball into the sky, immediately followed by a tornado-like shockwave that flattened the port and swept the city, shattering windows kilometres (miles) away.

Prime Minister Hassan Diab said that 2,750 tonnes of the agricultural fertiliser ammonium nitrate that had been stored for years in a portside warehouse had blown up, sparking “a disaster in every sense of the word”.

Bloodied and dazed wounded people stumbled among the debris, glass shards and burning buildings in central Beirut as the health ministry reported 100 dead and 3,700 injured across wide parts of the country’s biggest city.

What happened today will not pass without accountability, said Diab.

The blasts were so massive they shook the entire city and could be heard throughout the small country, and as far away as Nicosia on the eastern Mediterranean island of Cyprus, 240 kilometres (150 miles) away.

A soldier at the port, where relatives of the missing scrambled for news of their loved ones, told AFP news agency : “It’s a catastrophe inside. There are corpses on the ground. Ambulances are still lifting the dead.”

“It was like an atomic bomb,” said Makrouhie Yerganian, a retired schoolteacher in her mid-70s who has lived near the port for decades.

“I’ve experienced everything, but nothing like this before,” even during the country’s 1975-1990 civil war, she said.

“All the buildings around here have collapsed.”

News correspondents across the city saw shop and apartment windows blown out and streets covered with broken glass.

Photos posted online even showed damage to the inside of Beirut airport’s terminal, some nine kilometres from the explosion.

Hospitals already struggling with the country’s coronavirus outbreak were overwhelmed by the influx of wounded people and the country’s Red Cross called for urgent blood donations.