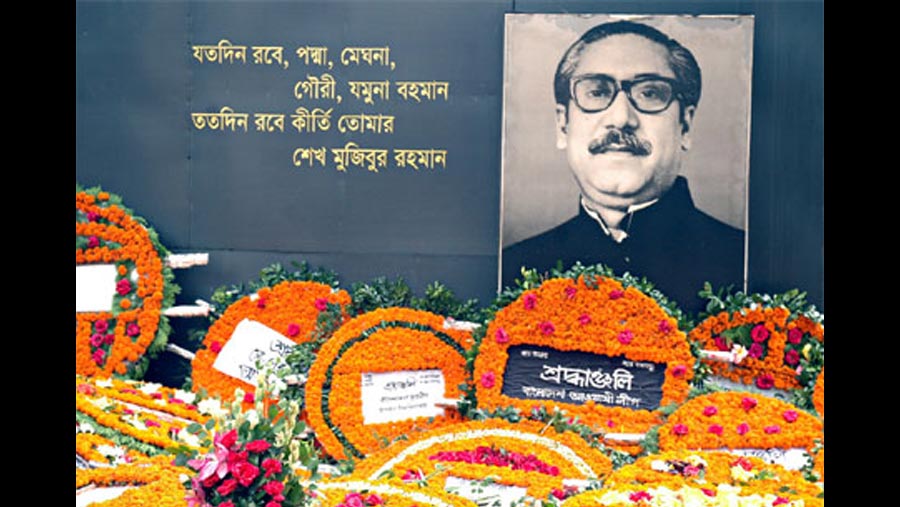 The month of mourning began today for the nation to recall once again the most brutal assassination in its history and renew the pledge to safeguard perpetually the country’s independence and sovereignty. The killing of Father of the Nation Bangabandhu Sheikh Mujibur Rahman and most of his family members on the fateful night of Aug 15, 1975 is the ugliest chapter of the nation’s history.

The killing of Bangabandhu, the greatest son of the soil in thousand years, descended a pall of gloom and spread a sense of deep sadness among the people in the country and across the globe. The world protested and condemned the killing, saying it is an irreparable loss to millions of people of Bangladesh.

The month of August is also black marked with another conspiracy of assassination. The nation cannot ever forget the heinous attempt of killing Sheikh Hasina through grenade attacks. The vested quarter, who assassinated Bangabandhu in 1975, also tried to destroy Bangladesh Awami League by killing its president Sheikh Hasina with grenades on an anti-terrorism rally at Bangabandhu Avenue in Dhaka on Aug 21 in 2004.

Like in the previous years, different political and socio-cultural organisations, including ruling Awami League and its associate bodies have chalked out month-long programmes to observe the month of mourning.

This year, the nation will mark the National Mourning Day and the 45th anniversary of martyrdom of Father of the Nation.

Awami League General Secretary and Road Transport and Bridges Minister Obaidul Quader today urged all level party leaders and activists and associate bodies as well as political, cultural and social organizations to observe the day with solemnity, maintaining the social distancing in wake of the Covid-19 pandemic. He also urged all the party units, including metropolitan, district, upazila, municipality and union, to observe the month of mourning coinciding with the central programmes, local media reported.

Awami Swechchasebak League and Bangladesh Chhatra League started the month-long mourning programmes by bringing out a torch procession in the city streets marching towards Bangabandhu Memorial Museum at Dhanmondi 32 in the city in the early hours of today.

Dhaka south and north units of Awami League will hold a special doa seeking eternal peace of the departed souls of Aug 15 martyrs after the prayers of Eid-ul-Azha.

Marking Sheikh Kamal’s birthday, on Aug 5, homage will be paid to Sheikh Kamal by placing wreaths at portrait of Kamal on the Abahani Club premises at Dhanmondi at 9 a.m. and at his grave at Banani graveyard at 10 a.m. in the city and doa and milad mahfil will be organized on the day.

Bangladesh Mahila Awami League will organize a virtual discussion on Aug 6, marking the birth anniversary of Bangamata Begum Sheikh Fazilatunnesa Mujib. Tributes will be paid to Begum Sheikh Fazilatunnesa Mujib on Aug 8 by placing wreaths at her grave while Qurankhwani, Milad and Doa mahfil will be organized on the day to mark her birthday. Jubo Mahila League will also organize a candle lighting programme in front of Bangabandhu Memorial Museum at Dhanmondi 32 in the city on the day.

Elaborate programmes have been taken centrally to observe the National Mourning Day on Aug 15 in a befitting manner.

At dawn on Aug 15, the national flag and party flag will be kept at half-mast and black flag will be hoisted at the Bangabandhu Bhaban, Awami League headquarters in the capital city and all other offices of the party across the country.

Tributes will be paid to Father of the Nation Bangabandhu Sheikh Mujibur Rahman by placing wreaths at the portrait of Bangabandhu in front of Bangabandhu Memorial Museum at Dhanmondi 32 in the city at 9 a.m. on the day while Dhaka city units of Awami League and associate bodies will pay homage to Bangabandhu coming with mourning processions.

At 10 a.m. on the day, homage will be paid to all the martyrs of Aug 15 by placing wreaths at Banani graveyard while offering ziarat, fateha, munajat and Milad Mehfil also will be held there.

Simultaneously, homage will be paid to Bangabandhu by placing wreaths at his grave at Tungipara in Gopalganj and offering Ziarat, Fateha, Munajat and Milad Mehfil also will be held there at 10 a.m.

Doa and milad hahfils will be held at all mosques across the country after Zohr’s prayers on the day while special prayers will be offered at temples, pagodas, churches and all places of worships.

In the afternoon, food will be distributed among the orphans, poor and destitute people. Mohila Awami League will hold a milad and doa mahfil on Bangabandhu Bhaban premises after Asr’s prayers on Aug 15.

Besides, on Aug 24, Awami League and its Dhaka city units and associate bodies will pay homage to Ivy Rahman by placing wreaths at her grave in Banani graveyard and organize doa and milad mahfil there.

Besides, Jubo Mohila League will organize a discussion on Aug 28, marking the grenade attack day on Aug 21.