PM orders all out assistance to flood-hit people 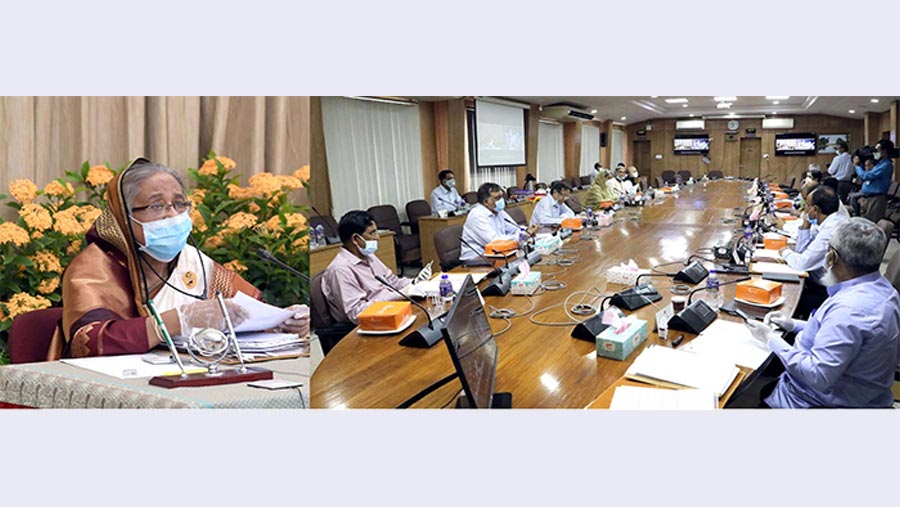 With an apprehension of prolonged flood across the country, Prime Minister Sheikh Hasina today asked the government officials to remain prepared for extending all sorts of support to the flood-hit people if the deluge is lingered.

“Every kind of assistance would have to be extended to the flood-hit people if the ongoing flooding is prolonged,” Cabinet Secretary Khandker Anwarul Islam said quoting the Prime Minister as saying.

Briefing media after the regular weekly meeting at his Secretariat office Cabinet Secretary Khandker Anwarul Islam said that the PM gave them a clear-cut instruction of taking all-out preparations to tackle any situation as there was an apprehension that the flooding may be protracted.

He said the PM asked the government officials particularly the field-level ones to stay prepared all the time staying at their workstations to face any situation if the deluge is prolonged.

Simultaneously, the prime minister asked the government officials to be cautious in case of distributing relief materials amid the Covid-19 pandemic.

The directives came from a regular weekly cabinet meeting with the Prime Minister in the chair this morning, a day after she gave similar instruction to her party leaders and activists.

The premier joined the meeting from her official Ganabhaban residence here while cabinet members and secretaries were connected from the Secretariat through video-conference.

The cabinet secretary said, “The Prime Minister herself supervises it (the flood situation and relief activities).”

The PM directed the local administrations to take prompt measures to accommodate the flood affected people to nearby schools, colleges and madrasahs in case of not having sufficient flood shelters, and give them all sorts of relief materials, particularly water purifying tablets and oral saline and make sure regular vaccination of their domestic animals, he said.

Anwarul said field-level government employees of the ministries concerned particularly education, health, and agriculture have already been asked to stay at their workstations during the flood period.

The cabinet secretary said despite having an in-built mechanism in the field-level to tackle flood, extra efforts are being made to this end as the ongoing flooding is predicted to be lingered.

Replying to a question, he said that the State Minister for Disaster Management and Relief made every detail of their preparations to face the possible prolonged flood.

The PM asked the agriculture minister to take measures for cashing on the advantage of flood for bumper production of Aman and Ropa Aman (T Aman), the cabinet secretary said citing his experience that bumper productions of paddy were seen after the flooding of 1988 and 1998 when he was a field-level official.

“If Aman production is hampered by the ongoing flood, it could be covered up by bumper production of Ropa Aman following the deluge that makes soil fertile,” Anwarul said quoting the premier.

He said that the country’s northern region is likely to witness a bumper production of Aman paddy due to having sufficient rain and water, although the flood made havoc on the crops of low-lying lands.

The Agriculture Minister informed the cabinet regarding the ministry’s measures about production of crops (Aman and T Aman) during the flood and post-flood periods, he continued.

The government’s top bureaucrat said that the PM has asked the authorities concerned to take preparations in advance to rehabilitate the flood-victims after the deluge.