PM for engaging youths with decision-making to combat Covid-19 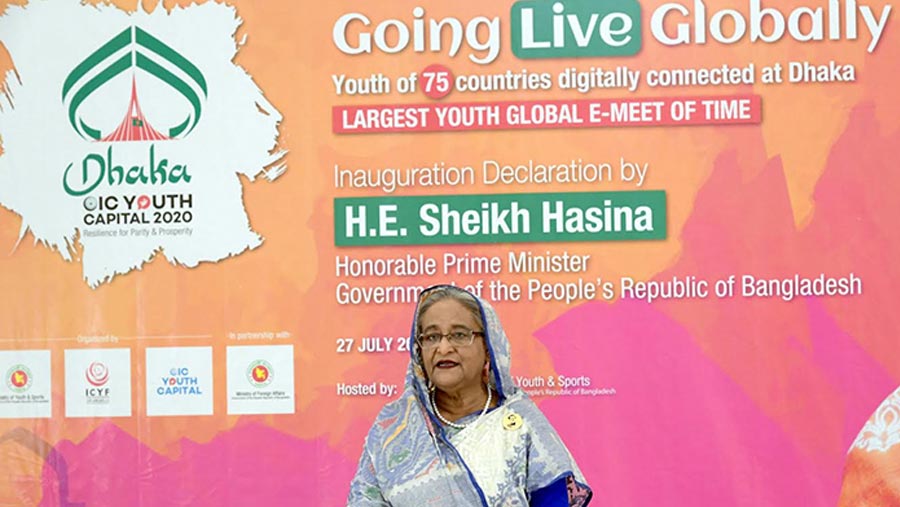 Prime Minister Sheikh Hasina today called for engaging youths with decision-making, ideas and innovations to fight coronavirus (Covid-19) pandemic to build a resilient and sustainable future for them.

While inaugurating the two-day celebration of  “Dhaka – OIC Youth Capital 2020” virtually this afternoon, Sheikh Hasina also sought more global cooperation for the basic survival of humanity in view of the pandemic which so far claimed 652,604 lives across the globe till Monday afternoon (BST).

“The youth has great opportunity to be part of this decision-making by engaging themselves with ideas and innovations to build a future which they think would be resilient and sustainable... Covid-19 has shown that we must cherish the vitality of the youth,” she said.

The premier simultaneously opened the two-day “Resilient Youth Leadership Summit” under the theme – ‘Parity and Prosperity: For a Resilient Future’, local media reported.

Sheikh Hasina said it has been observed that people live in cherishing natural environment are fighting this pandemic better. “Hence, we must work together to uphold basic features of the environment in our everyday life,” she said.

Terming Covid-19 crisis as a watershed event, the prime minister highlighted three vital points for “restructuring of the global economic order” after the pandemic.

She said the Covid-19 aftermath could see a paradigm shift in “restructuring of the global economic order” in the following means:

First, it intensifies the pre-existing signs of unease, expressed in calls for protectionism and more restrictive trade, immigration and visa policies. But it also highlights the need for global cooperation for the basic survival of humanity!

Second, signs and signals are clear that Covid-19 could end up surpassing the financial crisis of 2008-2009 in economic damage. But it also opens new avenues for networked financing and wealth creation.

Third, already, there has been economic intervention on a scale that hasn’t been seen for decades. Only by Apr 10, governments across the globe had announced stimulus plans amounting to over 10.6 trillion US dollar – the equivalent of eight Marshall Plans.

The PM said the Covid-19 pandemic has placed extraordinary demands on leaders everywhere – government, private sector, international community and beyond.

“What leadership needs during a crisis is not a predetermined response plan but behaviors and mindsets of the people involved in the process,” she said.

Sheikh Hasina said Covid-19 is forcing both the pace and scale of workplace innovations and these silver linings are thin compared to the scale of the disruptions.

“There is now a choice. We could choose rigidity in economic and executive control or we could choose flexibility and dynamism for innovation and new ideas in the face of overwhelming obstacles,” she said and added probably, somewhere in the middle lies the proverbial “golden mean”.

The prime minister pointed out that Bangladesh has already announced a 12.1 billion US dollar package for vulnerable segments of the population, business and agriculture which is 3.7% of its GDP.

“Bangladesh has so far made remarkable progress in alleviating poverty, attaining food security, improving health and sanitation and mainstreaming gender and empowering women,” she said.

Sheikh Hasina mentioned that global assessment projects Bangladesh as one of the three fastest growing economies globally over the next three decades. “Bangladesh is projected to become the 26th largest economy by 2030, and 23rd by 2050,” she said.

Referring to her government’s Vision 2021 for a “Digital Bangladesh”, the prime minister said it has not only been the blueprint for unlocking digital creativity of 53 million youths, but it also succeeded in fast-tracking Bangladesh’s pre-Covid-19 GDP growth rate up to 8.13%.

The premier said Bangladesh has given shelter to more than 1.1 million forcibly displaced Rohingyas from Myanmar and thanked the OIC and all the member states for extending their generous assistance towards one of the most persecuted populations in the world.

“Despite systematic denial, we are trying to arrange for their safe, secured and dignified return to their motherland with the help of the international community,” she said.

The premier said the Organization of Islamic Cooperation (OIC) embodies the aspirations of more than 1.8 billion people around the world.

“Since our time of joining in 1974 under the leadership of our Father of the Nation Bangabandhu Sheikh Mujibur Rahman, we have always looked upon to the OIC for its firm principle, empathy towards humanity and ethical moral compass,” she said.

“He (Bangabandhu) always strived to construct a prosperous, self-dependent, developed Bangladesh with the power of its indomitable youth,” she said.

The PM said the Father of the Nation’s student life could be an ideal life for future generations as he was a sportsman, devoted student and at the same time, a crusader against injustice and oppression.

Sheikh Hasina said she is happy that organizers of the “Dhaka – OIC Youth Capital 2020” have decided to launch the “Bangabandhu Global Youth Leadership Award” to honour the true spirit of his everlasting idealism.

The Gambian minister in his speech highlighted the protracted Rohingya crisis and condemned the atrocities on the forcibly displaced Myanmar people by the Naypyitaw government.

Reffering to the case filed by Gambia with the International Court of Justice against the Myanmar government for its atrocities on the Rohingyas, he said his country will continue to pursue the case in full strength to see its conclusion.

Earlier, an audiovisual presentation titled “Mujib as a Youth Icon” dedicated to birth centenary of Father of the Nation Bangabandhu Sheikh Mujibur Rahman was made at the event.

Besides, another audiovisual presentation on “Dhaka – OIC Youth Capital 2020” was made.

As many as 250 participants, including 100 from Bangladesh and 150 others from OIC member states and beyond, are taking part in the Dhaka – OIC Youth Capital 2020.

On Dec 25, the Istanbul-based Islamic Cooperation Youth Forum (ICYF), an entity affiliated to the Organization of Islamic Cooperation (OIC), announced Dhaka as the “OIC Youth Capital 2020” marking a significant recognition for the dynamic and determined leadership of Prime Minister Sheikh Hasina’s government in the youth sector.

Bangladesh contested for the coveted title since May last year and eventually was shortlisted – along with Kazakhstan and Tunisia – by ICYF before clinching the title on Dec 25.