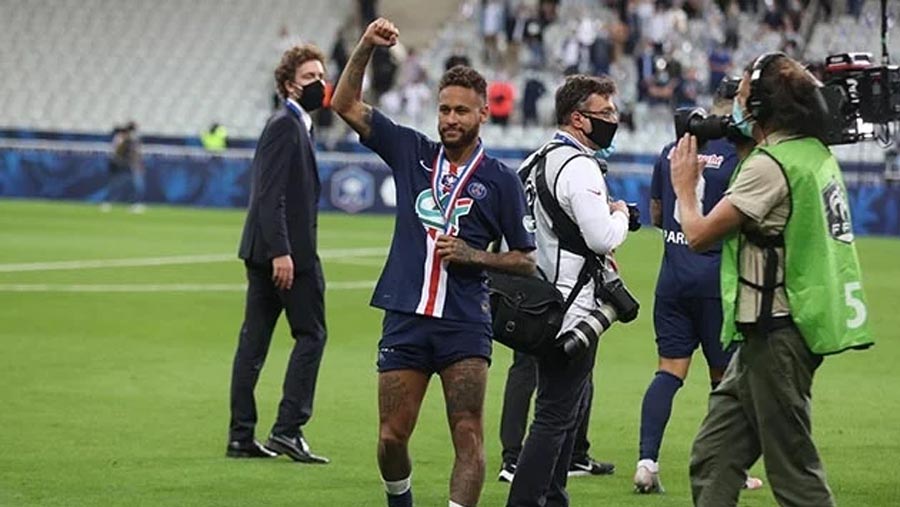 Neymar scored the winning goal as Paris Saint-Germain defeated 10-man Saint-Etienne 1-0 in the French Cup final on Friday (Jul 24), the first competitive fixture in the country since Mar 11 following the coronavirus pandemic. However, coach Thomas Tuchel faces an anxious wait over the fitness of Kylian Mbappe ahead of next month's Champions League quarter-final against Atalanta after the France star limped off in tears during the first half with an ankle injury.

Paris Saint-Germain overcame an injury to Kylian Mbappe to beat 10-man Saint-Etienne and win the French Cup in a game for which some fans were allowed into the Stade de France.

This was the first game in France after the league was ended in April because of the coronavirus outbreak.

Neymar opened the scoring in a fiery first half in which Loic Perrin was sent off for a bad foul on Mbappe. It prompted a melee on the pitch before the injured Mbappe had to go off.

The France forward left the pitch in tears and later returned to the dugout on crutches. He will be a serious doubt for PSG's Champions League quarter-final with Atalanta in August.

"Everyone is worried. Everyone who saw the foul is worried. Of course I'm worried," said coach Thomas Tuchel.

Neymar's goal proved enough to seal a 13th French Cup for PSG as the second half played out with few incidents of note, with both sides showing tiredness on their return to competitive action.