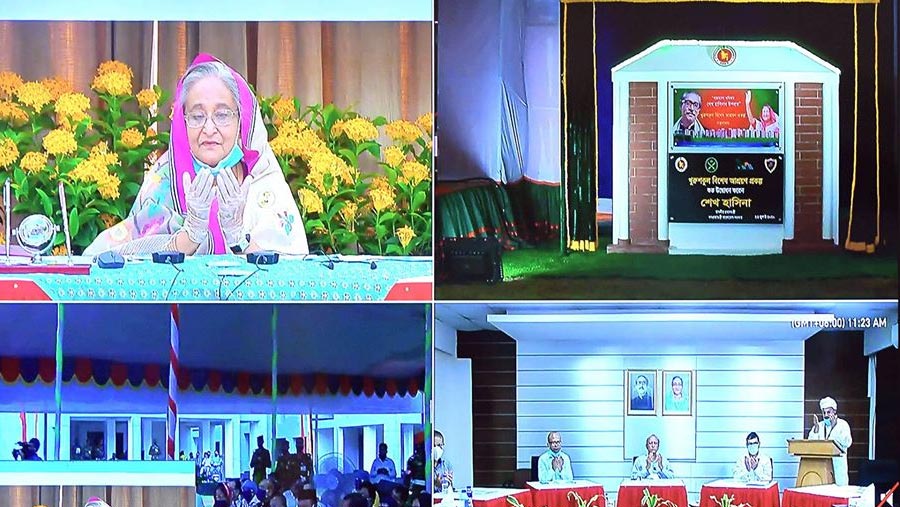 Prime Minister Sheikh Hasina on Thursday (Jul 23) reiterated her steadfast commitment to ensure housing for all, including the flood and river erosion-hit people, as she inaugurated the world’s biggest rehabilitation project for the climate refugees in Cox’s Bazar.

“We’re celebrating the Mujib Barsho, marking the birth centenary of Father of the Nation Bangabandhu Sheikh Mujibur Rahman. Our aim in his birth centenary is that a single person will not remain homeless. We’ll construct a house, even at least a ‘chala’ (shed), for every person. In any way, we’ll do it and it’s our goal,” she told a function.

The PM opened the landmark ‘Khurushkul Ashrayan Prokalpo’, the country’s largest rehabilitation project, in Khurushkul area on the outskirts of the southeastern beach town of Cox’s Bazar through a videoconference from her official Ganabhaban residence in Dhaka in the morning, local  media reported.

Referring to the ongoing flood situation in the country, the premier said her government has all preparations to combat the flood and will make arrangements for building houses and allotment of land for those who will be affected by the flooding and river erosion.

“We know that the menace of flood is being seen a little bit more (this season). This is Bengali month of Shrabon and more water will come in Bhadra month meaning that the country may witness more flooding in August-September,” she said.

“We’ve the preparation to face the flood and we’ve an aim that we’ll make arrangements for building houses and (allotment of) land for those who will be affected by the flooding and river erosion,” he added.

The PM said her government has allocated money separately in the budget for constructing houses for the homeless people so that a single person does not remain homeless.

“We’re working in this way and I would like to tell the people of entire Bangladesh that a single person will not stay homeless and every person will live beautifully,” she said.

Sheikh Hasina said giving attention to this, her government has taken tree plantation campaign in one hand, while it has taken steps to build houses for the homeless on the other. “We’ll look into the matter so that the living standard of every person is improved,” she said.

Chief of Army Staff General Aziz Ahmed spoke on the occasion, while Principal Staff Officer of the Armed Forces Division Lt Gen Md Mahfuzur Rahman and senior officials of the Prime Minister’s Office were present at the Ganabhaban.

Local parliament members and officials of the administration and the project were present in Cox’s Bazar.

With the inauguration, 600 families would get their new shelter in 20 just-built special structures having 32 flats with all modern amenities, Ashrayan’s project director Md Mahbub Hossain told reporters in Cox’s Bazar on Wednesday.

He said each family will get a 456.07 square feet flat in exchange of only Taka 1,001 while all the buildings were equipped with ramp system for people with disabilities, solar panels, safe drinking water, electricity, sanitation, waste management, drainage, cylinder gas and burner.

Hossain said under the scheme a total of 4,409 climate refugee families would be rehabilitated at the site as army troops were assigned to construct 139 five-storey buildings on 253.59 acres of land at a cost of Taka 1800.39 crore.

The PM said the government is making arrangements for rehabilitation of the landless and homeless people across the country.

“We’re constructing houses for them through the Ashrayan Project. Besides, anybody can build house by taking loan from the Housing Fund of Bangladesh Bank,” she said.

“We’re moving ahead by giving attention so that the people of our country live beautifully and get a scope for livelihood. Alongside, we’re making all arrangements for their education and healthcare services,” she added.

About the ongoing coronavirus pandemic, Sheikh Hasina said the pace of the country’s development work was very good (before the outbreak of pandemic), but the disease has created obstructions in all areas.

In this connection, the PM urged the people to follow health codes strictly, including wearing masks.

“I would like to request all to abide by the health guidelines about the disease and use face masks when you talk to anybody, and move and go to markets and protect yourselves,” she said.

Pointing out massive development work being implemented in Cox’s Bazar, the PM said there was no scope for the local people of livelihood except shrimp and salt cultivation.

“Now, we’ve taken multifaceted programmes for the development of the district... two or three tourist zones will be built in one hand, while we’re making arrangements for livelihood of the people. Besides a special economic zone will be set up there,” she said.

Pointing out the world’s longest unbroken sandy sea beach in Cox’s Bazar, the premier said that the government has taken massive development programmes in the district so that the people of the country and world can come here and enjoy it.

“We want to develop the Cox’s Bazar Airport in this way so that tourists across the world could visit the district and wide-bodied aircraft can land at the airport,” she said.

Highlighting various facilities for the inhabitants of Khurushkul Asharayn Project, the premier said it will be built as a separate town.

Mentioning that green belt will be erected along the river beside the project to save it from cyclone and storms, she urged its habitants to keep neat and clean their houses and plant trees in the project area.

The PM mentioned about her and her sister’s six-year refugee life after the assassination of Bangabandhu in 1975, saying that they have known the torment of staying as refugees abroad.

“After return home, I visited across the country and witnessed many cyclones, storms and famines and I rushed to the affected people on behalf of my party,” she said.

Referring to the cyclone in Cox’s Bazar in 1997, Sheikh Hasina said she visited St Martin at that time and saw that the houses of the island people were damaged.

“At that time, I took a decision that I will construct houses for them. But there was no khas land in the island and an AL leader came forward proposing that he will give land in this regard,” she said.

She said Bangladesh Navy proposed at that time that they would construct houses for the cyclone victims in St Martin. “Accordingly, they built the houses and from that time our journey started and took the Ashrayan as a project and later gave responsibility of the project to the armed forces,” she said.

The PM thanked all concerned for implementing the Khurushkul Asharayn Project.

Later, the PM handed over keys to some inhabitants of the project on digital platform, while three beneficiaries of the scheme planted trees at the project site on behalf of the premier.

According to the project director, Khurushkul Ashrayan Prokalpa would have four zones – residential, tourism, dried fish processing zone or ‘shutki mahal’ – and a buffer precinct with greenery.

“The size of the structures and number of beneficiaries made the Khurushkul scheme as the country’s largest rehabilitation project” since the Ashrayan Prokalpa was launched in 1997 following a devastating cyclone in the southeastern coastlines, he said.

But the beneficiaries of the Khurushkul scheme were mostly victims of the deadly 1991 cyclone that turned the homeless forcing them to take refuge in the airport area in Cox’s Bazar town where they virtually languished in crammed shanties in the subsequent decades.

Under PMO supervision, army’s the 10 infantry division and Cox’s Bazar district and upazila administrations jointly constructed the 20 buildings in the first phase of the project, while the Khurushkul Asrayan Prokalpa was taken in 2014-15 fiscal on premier’s directives.