Use modern methods to save local varities of fishes from extinction: PM 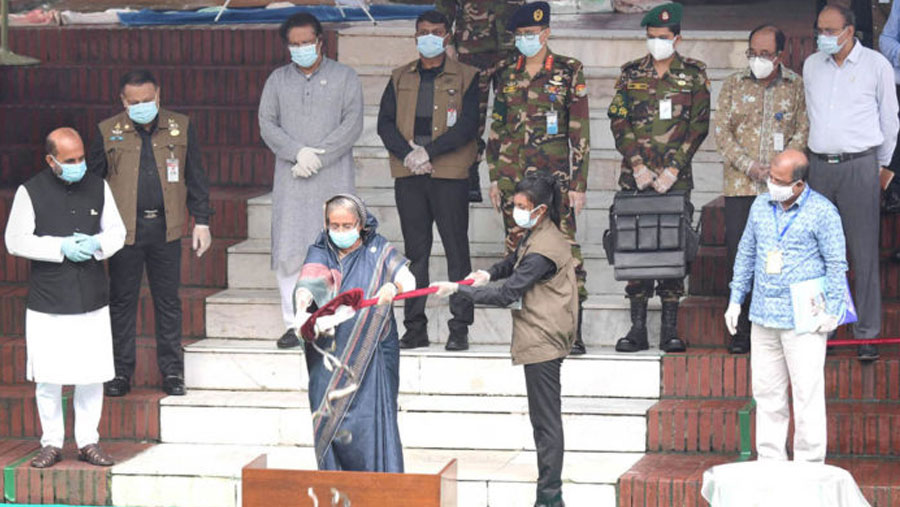 Prime Minister Sheikh Hasina on Wednesday (Jul 22) stressed the need for using developed and modern methods to save the local varities of fishes from extinction.

“Coming out of the traditional methods, we’ve to adopt developed and modern ones to protect local species of fishes from extinction,” she said after inaugurating the National Fisheries Week, 2020.

The National Fisheries Week is being observed across the country this year from Jul 21 to Jul 27.

The theme of the week is “Machh Utpadan Briddhi Kori, Shukhi Samriddha Desh Gori (Let us increase fish production and build a happy and prosperous country)”.

The premier pointed out that the country has 475 varities of sea fish and 250 species of freshwater fish alongside lobstar, crabs and snails which have a huge demand at local and international markets.

The premier said the investment in fisheries sector generates employments in one hand, while it makes the national economy prosperous on the other hand.

Spelling out her government’s timely measures for overall development of the fisheries sector, she said the production of fishes has increased by 50 percent in the last 11 years.

Bangladesh ranked second position in growth rate of producing freshwater fishes according to a report of the UN’s Food and Agriculture Organization (FAO), she mentioned.

The premier highly appreciated all concerned for their efforts to increase fish production alongside continuing its distribution and export despite the health risk amid the coronavirus pandemic.

“Bangladesh is now self-reliant in fish production. We, per head, are currently taking 62.58 grammes fishes daily against the demand of 62 grammes,” she added.

The premier called upon all to keep up their strides to boost fish production in the greater interest of the country.

“Our main target is to earn foreign currencies by increasing fish production alongside meeting nutrition demand of the people and generate huge employment,” she continued.

In this context, the premier recalled the remarks of Father of the Nation Bangabandhu Sheikh Mujibur Rahman that fisheries would be the second main sector in earning foreign currencies.

She said Bangabandhu first released fish fries into the lake of Ganabhaban in 1973 to encourage the countrymen in raising fish production.