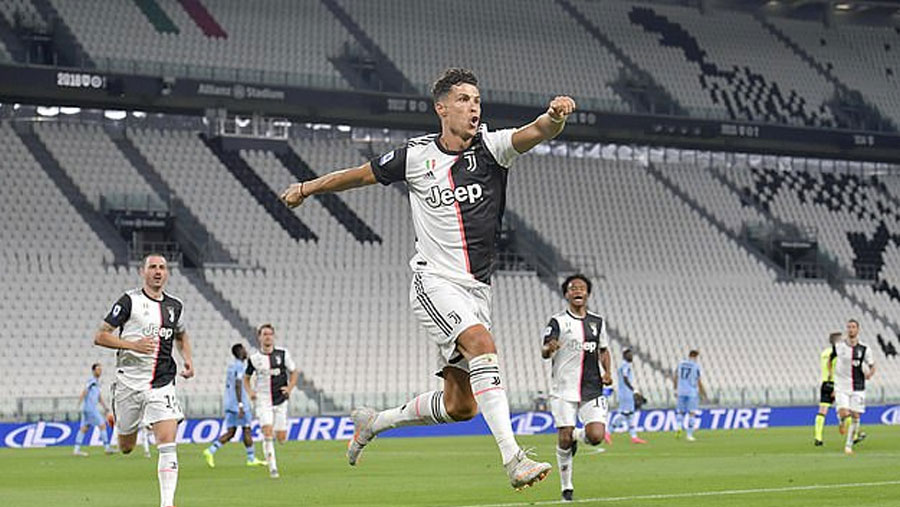 Cristiano Ronaldo scored twice to give Juventus a 2-1 win over Lazio which puts it on the brink of a ninth successive Serie A title on Monday (Jul 20). Ronaldo has now became the first player to score 50 goals in Serie A, La Liga and the Premier League and his team is standing at the door of Serie A title. Juve are eight points clear of Inter Milan and need four points to clinch a ninth consecutive title.

Cristiano Ronaldo became the first player to score 50 goals in the Premier League, La Liga and Serie A after a double in Juventus' 2-1 win over Lazio.

Cristiano Ronaldo became the first player to score 50 goals in Serie A, La Liga and the Premier League as his double against Lazio put Juventus on the brink of the Serie A title.

Ronaldo opened the scoring with a penalty and tapped in a second from Paulo Dybala's pass.

Ciro Immobile scored a penalty to pull one back for fourth-placed Lazio.

Ronaldo and Immobile are joint top scorers in Serie A with 30 goals each. Portugal captain Ronaldo is bidding to become the first Juve player to win the Serie A golden boot since Alessandro del Piero in 2007-08.

Juventus – who had failed to win in their previous three games – now only need four points in their last four games to seal the first league title of manager Maurizio Sarri's career.

Ronaldo was the difference between the teams. The 35-year-old scored a penalty awarded by the video assistant referee after a Bastos handball to make it 1-0.

He then finished off a two-on-one after being unselfishly set up by Dybala.

Juve looked in control and Ronaldo hit the crossbar with a header as he searched for a hat-trick, but they ended up hanging on when Leonardo Bonucci brought down Immobile, who scored from the spot.

Ronaldo is only the third Juve player ever to score 30 goals in a Serie A season, while Immobile is the fifth Italian to reach that landmark.

The pair have also equalled the record of penalties scored in a Serie A season with 12, level with Lazio's Giuseppe Signori in 1995-96.

Ronaldo is the fastest player to score 50 goals in Serie A this century, with 61 appearances. His second goal was his 51st.

Serie A: 51 goals in 61 appearances for Juventus