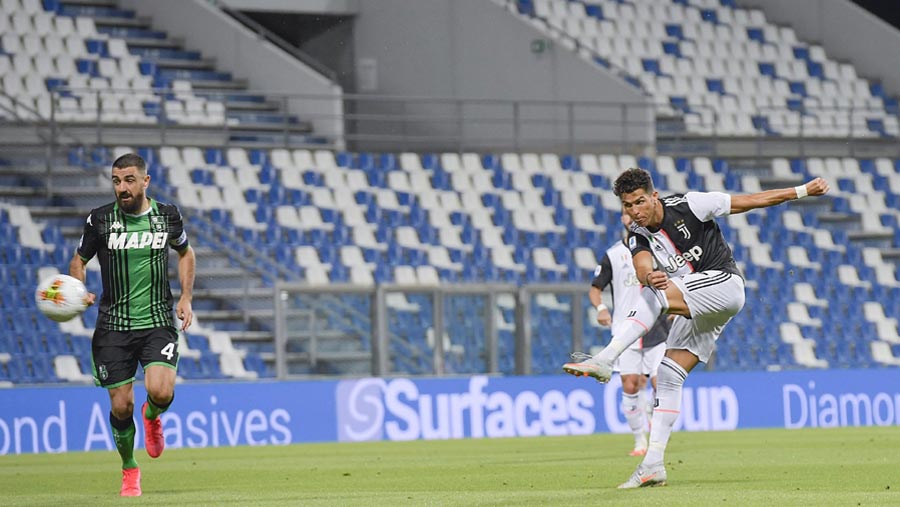 Juventus was held to a 3-3 draw at Sassuolo in Serie A on Wednesday (Jul 15), although that will do little to slow its seemingly unstoppable march to a record-extending ninth straight league title.

Juventus played out a six-goal thriller with Sassuolo that took them seven points clear at the top of Serie A.

Juve led 2-0 through Danilo's fine strike from the edge of the area and Gonzalo Higuain's powerful effort from Miralem Pjanic's long ball. But Sassuolo took a 3-2 lead thanks to Filip Djuricic's first-time effort, a stunning Domenico Berardi free-kick and Francesco Caputo's close-range finish.

Alex Sandro's header rescued Juventus, who are stumbling towards the title.

They have failed to win in their past three games, conceding nine goals – as many as they let in in their other 13 league matches in 2020.

Wojciech Szczesny made seven saves against eighth-placed Sassuolo – the most any Juve keeper has had to make in a Serie A game since March 2014.

Cristiano Ronaldo failed to score in a Serie A game for the first time since March, having netted seven goals in six league games since the restart.

Sarri's side are looking for a ninth consecutive Serie A title and lead second-placed Atalanta by seven points with five games to go.

Lazio moved up to third with a 0-0 draw at Udinese, while Inter Milan could move within six points of Juve if they beat SPAL on Thursday.

AC Milan boosted its chances of qualifying for Europe as it came from behind to beat Parma 3-1. Milan moved level on points with sixth-place Napoli, which drew 1-1 at Bologna. Roma is four points ahead after beating Hellas Verona 2-1.

Elsewhere, Sampdoria beat Cagliari 3-0 to move eight points above the drop zone and 18th-place Lecce, which lost 3-1 at home to Fiorentina.