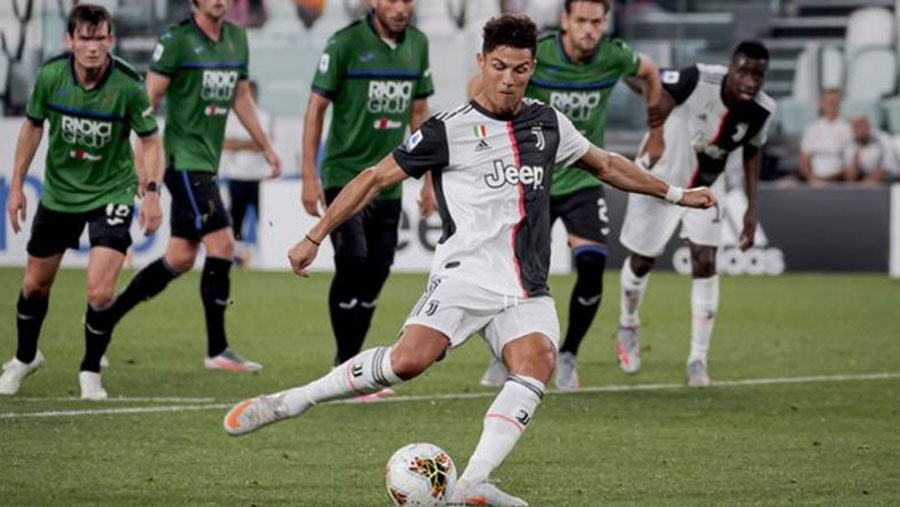 Cristiano Ronaldo converted two penalties, both awarded for handballs and the second in the last minute, as Serie A leader Juventus twice hit back to draw 2-2 with Atalanta to move closer to a ninth successive Serie A title on Saturday (Jul 11).

Cristiano Ronaldo scored two penalties as Juventus survived a scare to move eight points clear at the top of Serie A with a draw against Atalanta.

The visitors, who controlled long periods of the game, twice went ahead in Turin, via Duvan Zapata and Ruslan Malinovskiy.

However, Ronaldo took his tally to 28 goals in 28 league games with his second penalty in the 90th minute.

Second-placed Lazio had earlier fallen to a shock 2-1 home defeat by Sassuolo.

Atalanta, who have scored 19 goals more than any other side in Italy's top flight this season, twice appeared on course to move up to second in the table with a 10th straight win.

Alejandro Gomez's clever turn and pass released Zapata to open the scoring – with the Colombia forward fending off Matthijs de Ligt and then sliding his shot past Juve goalkeeper Wojciech Szczesny.

Marten de Roon's handball presented Ronaldo with his first goal of the evening from the penalty spot but Malinovskiy's low drive saw Gian Piero Gasperini's side regain the initiative.

Ronaldo, who was quiet throughout, converted his second penalty of the night after another handball – this time from Luis Muriel – to rescue a point for Maurizio Sarri's side.