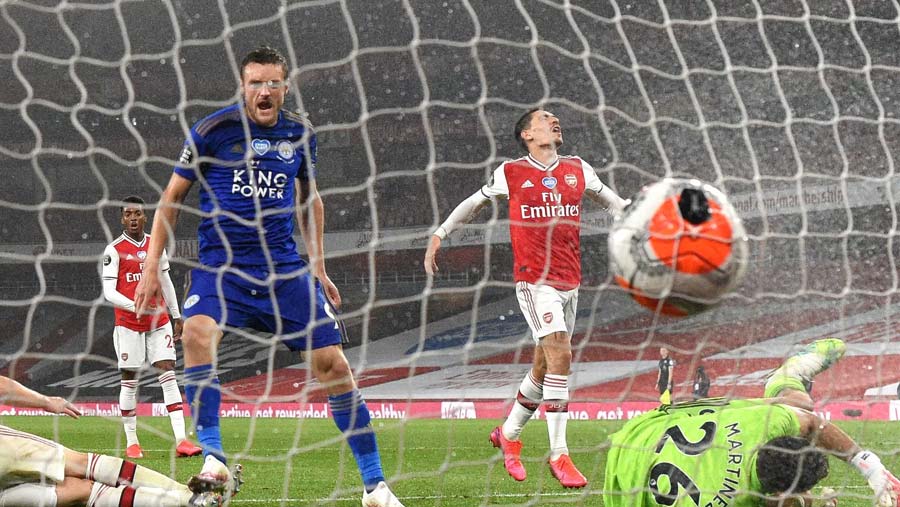 Arsenal and Leicester City shared the spoils at the Emirates as Jamie Vardy's late goal canceled out Pierre-Emerick Aubameyang’s opener.

The Gunners looked on course for a fifth successive victory to maintain their own outside chance of a place in Europe’s elite competition next season after Pierre-Emerick Aubameyang swept in his 20th league goal of the season in the first half.

Leicester goalkeeper Kasper Schmeichel kept Arsenal at bay with a string of fine saves before the interval, twice denying Alexandre Lacazette as well as Bukayo Saka – and it proved to be a vital contribution.

Arsenal were reduced to 10 men with 15 minutes left when Eddie Nketiah was sent off four minutes after coming on as substitute for a high challenge on James Justin, and Leicester cashed in when Vardy slid home Demarai Gray’s cross in the 84th minute, the goal finally awarded after a lengthy VAR check for offside.

It was Vardy’s 22nd league strike of the season and restored his two-goal advantage over Aubameyang at the top of the Premier League scoring charts.

Leicester down to fourth, four points ahead of Manchester United having played a game more, but this was an important point that left Arsenal frustrated in seventh.