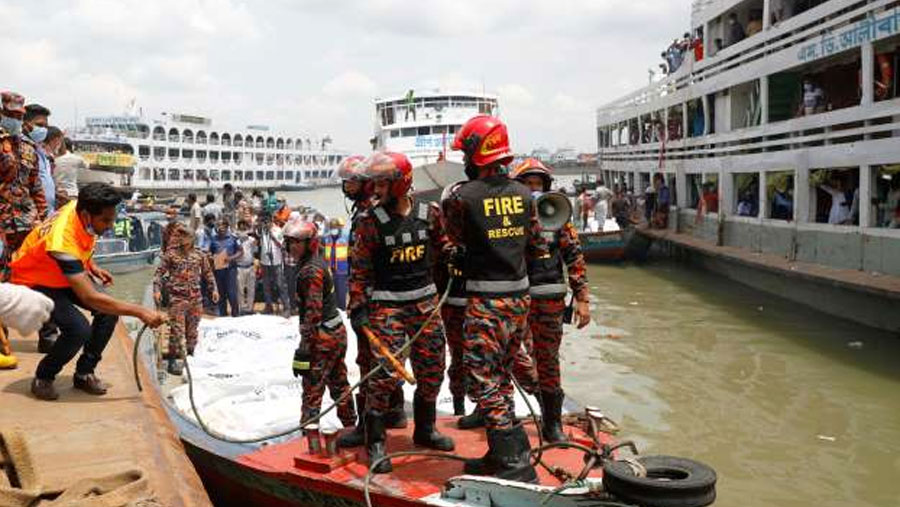 The death toll from the launch capsize in the Buriganga River climbed to 33 with the recovery of another body from the river near Shyambazar on Tuesday (Jun 30). A diver team of fire service retrieved the body around 12:50 a.m., local media reported citing duty officer Ershad Hossain of the fire service headquarters control room.

Earlier, Thirty-two bodies were recovered following the launch capsize incident in the river on Monday.

The rescue operation resumed on in the morning.

Meanwhile, movement of heavy vehicles on Postagola China-Bangladesh Friendship Bridge remained restricted since Monday evening as it was damaged  after being hit by a salvage vessel  in the morning, he added.

He also informed that a guarder of the bridge was displaced that caused the problem, sources said.

On Monday night, divers night rescued Sumon Bepari, 55, who survived in the water for nearly 13 hours after the launch-capsize incident.

“Sumon, of Abdullapur area under Tongibari thana in Munshiganj, was rescued at around 10:30 p.m. from the Buriganga River,” said Syed Kamrul Hasan, duty officer of the control room at Fire Service and Civil Defence headquarters.

He was immediately taken to Sir Salimullah Medical College Mitford Hospital, he added.

Moyur-2 launch was seized and no passengers remained missing in the incident, said A K M Arif Uddin.

The Dhaka-bound ‘MV Morning Bird’ launch from Munshiganj sank at around 9:30 a.m. in the river after being hit by another launch ‘Mayur-2’ near Shyambazar in the capital’s old town.