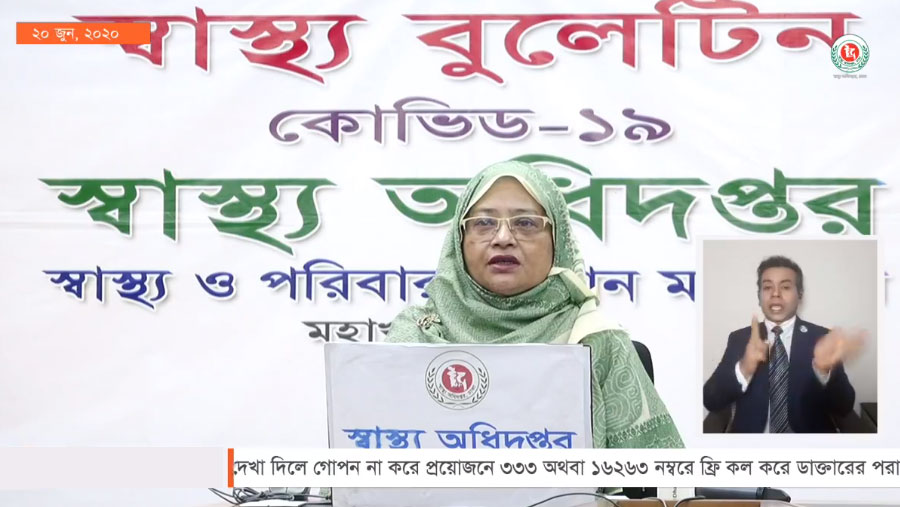 The health authorities on Saturday (Jun 20) confirmed the detection of 3,240 new coronavirus cases across the country in the span of 24 hours, taking the total number of confirmed cases to 108,775. During the same period, another 37 infected people lost their lives, raising the death toll to 1,425. Besides, 1,048 more patients made recovery. So far 42,945 people have recovered from the disease.

Additional Director General of the Directorate General of Health Services (DGHS) Prof Dr Nasima Sultana came up with the disclosure at its daily health bulletin.

In the last 24 hours, coronavirus testing laboratories across the country tested 14,031 samples, she added.

The detection rate of new patients on Saturday has been recorded at 23.09 percent.

Against the total number of detected cases, the recovery rate is 40.44 percent and the mortality rate is 1.31 percent in the country.

Dr Nasima mentioned that details about the deceased will be announced via press release later.

Across the country, 628 more people were taken to isolation in the last 24 hours while 187 were released.

During the same period, another 1,538 people were home and institutionally quarantined and 2,074 were released.

The confirmed coronavirus cases have exceeded 8.6 million globally, with over 459,437 fatalities and more than 4.2 million recoveries, according to the latest tally from Johns Hopkins University on Saturday.

Among the countries, the US has been the worst-hit with the highest recorded deaths of 119,099 patients and about 2,219,976 confirmed cases.

Meanwhile, the confirmed coronavirus cases in Brazil have been surpassed one million with 48,654 deaths, making the Latin American country the second worst-hit country in the world following the U.S.

According to JHU data, Russia and India have come up to the third positions and fourth position after the US and Brazil with 568,292 and 380,532 confirmed cases as of Saturday with 7,831 and 12,573 fatalities respectively.

Chinese health authorities on Saturday said that 27 new Covid-19 cases were reported on the Chinese mainland Friday, of which 23 were local transmissions and four were inbound cases. No new deaths were reported.

The World Health Organisation (WHO) declared the coronavirus crisis a pandemic on Mar 11.