Have confidence Bangladesh won’t accept defeat in anything: PM 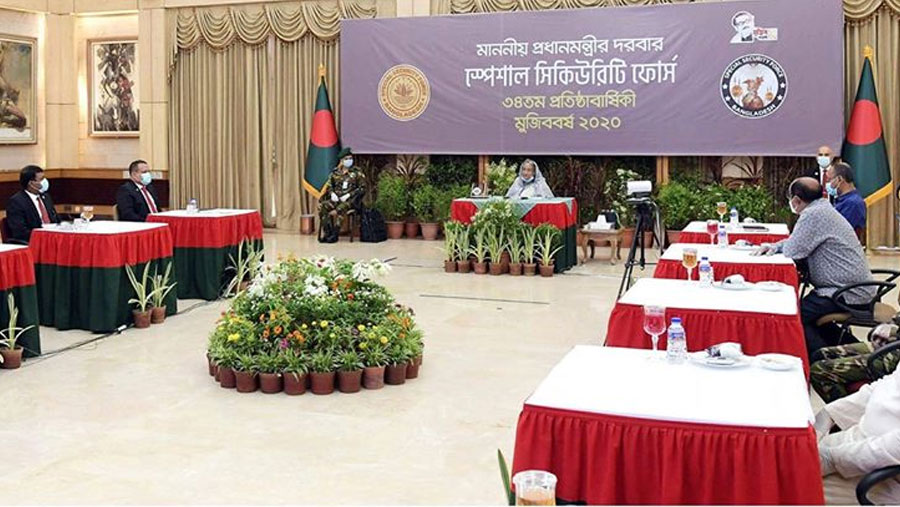 Prime Minister Sheikh Hasina today called upon people to have confidence and trust that Bangladesh wouldn’t bow down to anything like the Covid-19 pandemic.

“I talk to people time and again using the digital platform amid the corona situation as I want people to keep confidence and trust that we would not lose to anybody or anything (the Covid-19 pandemic),” she said while addressing a function marking the 34th founding anniversary of the Special Security Force (SSF) from her official residence Ganabhaban in Dhaka, local media reported.

The premier simultaneously said it wouldn’t be acceptable to bow down to anything in fear of death as it could come in any moment and any circumstances.

Spelling out the global situation triggered by the coronavirus pandemic, she said, “The entire world has now become standstill due to fear and deaths caused by the coronavirus despite the fact that many more people die (in the world) in various accidents (in comparison to Covid-19).”

No power or asset of the rich and powerful countries could so far bring any positive result in the fight against the invisible virus Covid-19, she continued.

The PM said her government has given a special attention to keep continuing the lives and livelihoods of the people alongside ensuring their protection and education as well.

“I urge the countrymen to protect themselves (from the coronavirus) by following the health codes. Everyone should bear in mind protection of himself means to protection of others,” she said.

The premier greeted the SSF personnel for arranging security for her and other VVIPs risking their lives saying, “As you people are thinking about my security, I am also thinking about your security. I want you to be safe and secured.”

The premier said the people, who are entrusted with arranging security for the VVIPs including the heads of the state and government of the foreign countries, should have the expertise about the modern technological knowledge because types of crime are being changed as the world is progressing ahead.

After assuming office in 1996, she said the manpower of SSF force was found less and under equipped, adding that, later her government purchased modern technologies and appoint more manpower for the SSF.

The PM called upon the SSF personnel to read the book titled “Secret Documents of Intelligence Branch on Father of the Nation Bangabandhu Sheikh Mujibur Rahman,” saying, “The people, who are working to ensure security, should study the book to know on how to work.”

Besides, one could know how Bangabandhu make Bangladesh ready in phases towards the desired independence, she continued.

“The DG of SSF later handed over a cheque of Taka one crore and money equivalent to one day salary of the SSF personnel for the Prime Minister’s Relief and Welfare Fund on the occasion,” PM’s Press Secretary Ihsanul Karim who was present at the function told media.

SSF personnel were connected to the function from the Prime Minister’s Office through video conference.

The PM said her government has been working to change the lot of the people bringing smiles on their faces by making Bangladesh a poverty-and-hunger-free country as dreamt by the Father of the Nation.

She went on saying, “The Father of the Nation is no more among us as he was assassinated on Aug 15 in 1975. He liberated the country with a target of giving the people a better life.”

“I have been working to accomplish the unfinished tasks of my father since my return to the country after six years of forced exile,” she said.

The premier said that the Covid-19 pandemic has halted all the progress of Bangladesh at the time when the country was heading towards the overall socio economic advancement with reducing poverty rate to 20 percent from 40, increasing the GDP growth rate to 8.1 and the per capita income alongside making tremendous development of the villages in only 10 years.

In this context, Sheikh Hasina, also President of the ruling Awami League, said they have lost her party’s central executive committee member and former Sylhet City Corporation Mayor Badar Uddin Ahmed Kamran due to the coronavirus.

“Grenades were charged on Kamran twice and he survived the attacks. But, this time the Covid-19 had claimed his lives,” she continued.

Despite facing all the odds, the premier hoped that Bangladesh would have to move forward in materializing the dream of the Father of the Nation.