Worst Covid-19-affected areas would be under lockdown, says PM 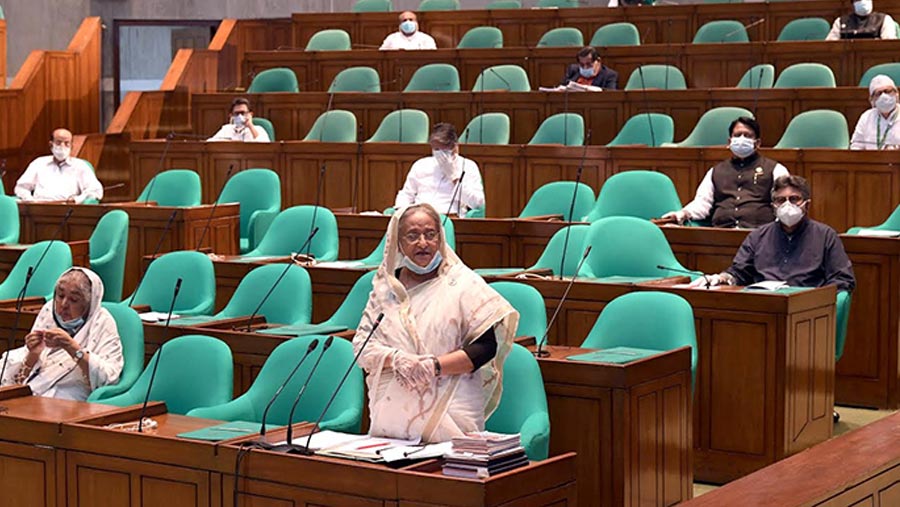 Prime Minister Sheikh Hasina today told the parliament that the government would put the worst affected areas under lockdown to contain further spread of Covid-19.

Hasina, also leader of the House, said her government will take effective measures to keep the wheels of economy running so that no one dies of starvation.

The premier said this while taking part in the obituary motion on veteran Awami League leader Mohammed Nasim and State Minister for Religious Affairs Sheikh Md Abdullah at the Jatiyo Sangsad today.

"Keeping people safe from getting infected and running the wheel of economy simultaneously is like a war," PM Hasina said, adding that the fear rising out of the coronavirus pandemic has reached a dreadful level.

"We can't allow deaths from starvation during the panic. We had to take measures so that lives and livelihoods can go on," she said.

Sheikh Hasina also said that her government has been trying its best to make people understand the necessity of following the health guidelines properly to contain further spread of Covid-19.

"The wave of this virus has entered South Asia after travelling to western countries. The whole world is now under the grip of panic. This is very strange. We've never seen this kind of situation in the past," she said.

The PM also said that she had turned down the requests of many of her well-wishers to not attend JS sessions amid this situation.

"I had faced bullets, bombs and grenades, and I will not sit idle out of fear [of this virus]," Hasina said.

The PM recalled her memories with senior Awami League leaders Mohammed Nasim and Sheikh Md Abdullah, terming their deaths as "irreplaceable loss" for the country as well as for Awami League.

A one-minute silence was observed and a munajat was offered at the House seeking salvation and peace of the departed souls.