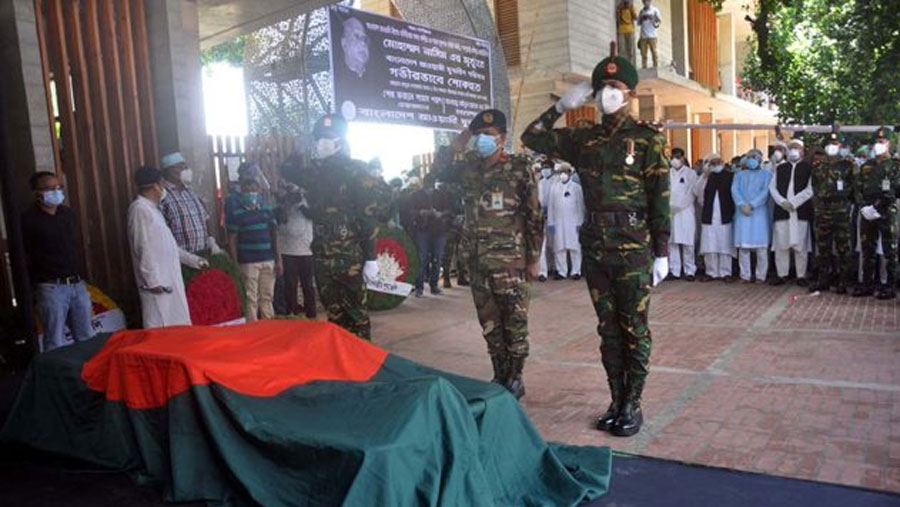 Bangladesh Awami League presidium member and 14-party alliance spokesperson Mohammed Nasim was laid to eternal rest at Banani graveyard in the city. The veteran freedom fighter was given a guard of honour before his burial, local media reported.

Earlier, the first namaz-e-janaza of Mohammad Nasim was held at about 9:40 a.m. at Dhanmondi’s Sobhanbagh Jam-e-Mosque where several hundred people took part.

Nasim was buried at Banani graveyard around 11 am after his second namaz-e-janaza at Banani Jam-e-Mosque at 10:30 a.m.

Earlier, Nasim, who had been on life support after suffering a stroke, passed away at Bangladesh Specialised Hospital here on Saturday at the age of 72.

He left behind wife, three sons and a host of relatives and admirers.

On Jun 1, Nasim was admitted to the hospital. Later, he was tested coronavirus positive. He suffered a stroke in the early hours of Jun 5 while undergoing treatment at the hospital.

Following the directive of the Prime Minister, a 13-member medical board was formed led by Dr Kanak Kanti Barua, a renowned neurosurgeon and Vice-Chancellor of Bangabandhu Sheikh Mujib Medical University (BSMMU).

After a few days, Nasim was found coronavirus negative after testing samples for two times.

Nasim was born on Apr 2, 1948, in Kazipur upazila of Sirajganj district. His father, Shaheed Captain M Mansur Ali, was one of the organisers of the Liberation War of Bangladesh and a close associate of Bangabandhu Sheikh Mujibur Rahman.

Mansur Ali served as the minister of finance, industry and commerce in the government of Bangladesh formed at Amrakanon of Baidyanathtala in Meherpur during the War of Liberation in 1971, as well as in the cabinet of the post-independence Bangabandhu’s government.

Earlier, in the tenure of the 1996 government, he had also successfully served as the Minister for Home Affairs, Housing and Public Works and Posts and Telecommunications.

He was a six-term Jatiyo Sangsad member representing the Sirajganj-1 constituency.

He was an Awami League presidium member and the spokesperson of the 14-party alliance.

As an elected MP of the current parliament, he was the chairman of the Parliamentary Standing Committee on Food Ministry.

He set up several educational institutions in different areas, including in Dhaka and Sirajganj.