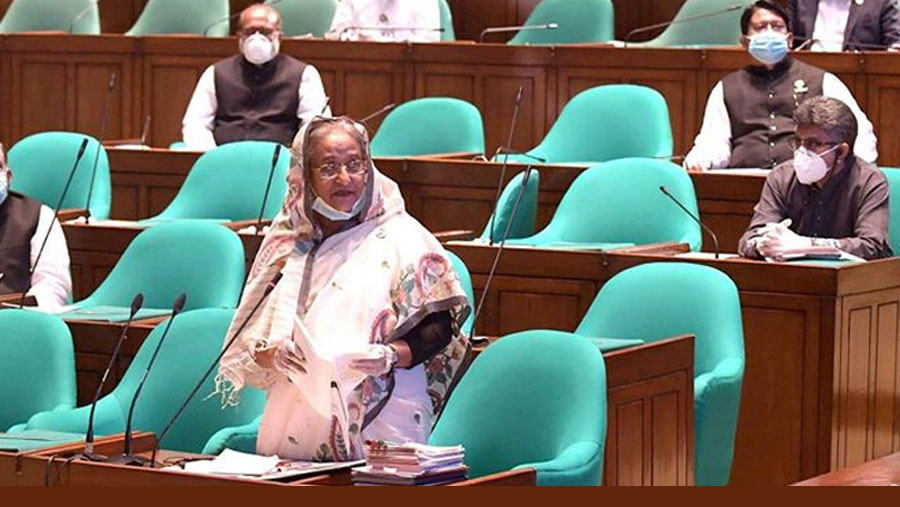 Prime Minister and Leader of the House Sheikh Hasina today said her government is trying its best to mitigate the plight of the unattended people hit hard due to the outbreak of the coronavirus.

“There is a huge population who remain out of the attention of the society in the current situation arising out of the coronavirus outbreak. But we’re trying our best to minimise their ordeal and sorrow by extending support to them in various ways,” she said.

The Leader of the House also reiterated that she will continue to do everything necessary so that the people of the country don’t go through hardship due to the Covid-19 outbreak.

“We’ll combat the coronavirus in the way we tackled the super cyclone “Amphan”. Alongside we’ll continue to do whatever necessary so that the life and livelihood of the people go on and they don’t suffer due to the coronavirus,” she added.

The PM was taking part in a discussion on an obituary reference brought by Jatiyo Sangsad Speaker Dr Shirin Sharmin Chaudhury in the inaugural sitting of the eighth session of the 11th parliament.

The eighth session which is also the budget session of the Jatiyo Sangsad for the fiscal year 2020-21 began this afternoon maintaining the health guidelines and social distancing in view of the Covid-19 situation in the country.

At the outset of the day’s proceedings, the Speaker brought the obituary reference on distinguished persons who died since the 7th session of the 11th Jatiyo Sangsad.

The PM said the daily wage earners and those who do small works and trades became jobless due to the Covid-19.

“But our government is reaching foods to every person and managing some cash money for them by taking their information. We’ve also provided assistance to the orphanages and mosques... even we extended help to those who painted behind the rickshaws by finding out them,” she said.

Sheikh Hasina said everybody knows the artists, but nobody thinks about those people who extend help to the artists. “So I’ve already instructed the information minister and the ministry to assist these people,” she said.

The PM said her younger sister Sheikh Rehana requested her to look into the matter, saying that why those who help the artists don’t get the assistance? “It’s the advice of (Sheikh) Rehana to provide support to those who paint behind the rickshaws,” she said.

She also responded to the concern of the opposition chief whip about the safety of the PM due to the coronavirus who requested the Leader of the House to join parliament session virtually from Ganabhaban.

“I didn’t come to remain alive, I’ve come to make sacrifice my life for the people of Bangla. So there is nothing to be panicked,” she said.

Sheikh Hasina said: “Man is mortal. As I born, I’ve to die one day and it may happen due to corona, firing or bomb, sickness or while speaking. As death in inevitable, there is nothing to get scared. I was not panicked (in the past) and never get scared (in future).”

The PM said she returned home (in 1981) when the killers of Bangabandhu and the war criminals were in power. “In that situation I came back home. If I would have been scared, I may not return home in my life. But I didn’t fear,” she said.

The Leader of the House said that the Almighty gives some works to the people. “I’ve to do the works that Allah has bestowed on me and I’ll continue that works until the works are not finished,” she said.

Sheikh Hasina the entire world came to a halt due to the coronavirus pandemic which snatches hundreds of lives every day.

“The number of recoveries in Bangladesh is more despite that a panic prevails among the people,” she said.

The Leader of the House said whatever the countries are strong economically and arms, no power now works. “It seems to me that the coronavirus is the strongest and the nature is taking revenge,” she said.

The PM once again thanked the physicians, nurses and health workers, administrative officials, members of the armed forces and law enforcement agencies as well as her party leaders and workers for rendering services to the people with utmost sincerity to contain the deadly disease.

Sheikh Hasina also elaborated her government’s measures to tackle the cyclone Amphan and extended thanks all concerned to work sincerely in this regard.

The PM recalled the contributions of Habibur Rahman Mollah, MP, as well as other former AL lawmakers to the party.

Sheikh Hasina also remembered contributions of Prof Anisuzzaman and Dr Jamilur Reza Chowdhury to the field of education and the country’s development.

The premier prayed for eternal peace of the departed souls and conveyed profound sympathy to the bereaved families.