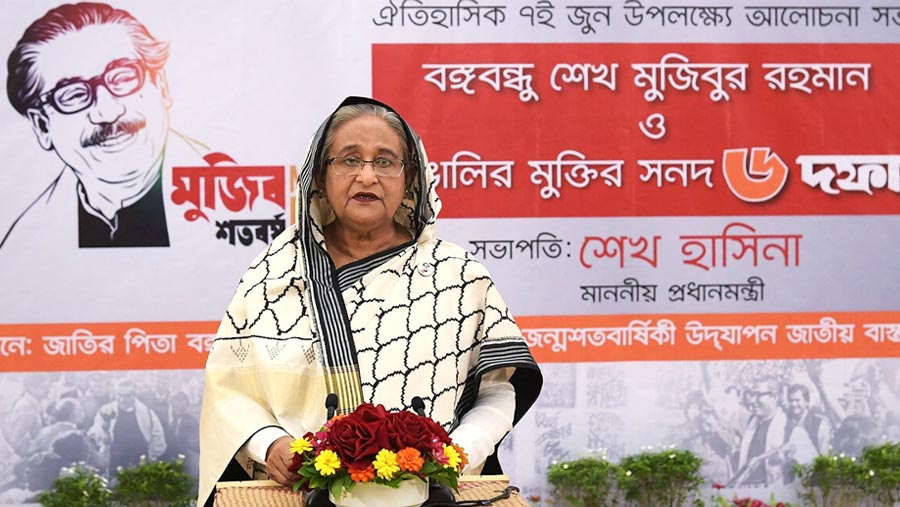 Prime Minister Sheikh Hasina today said the historic six-point demand declared by Bangabandhu was blossomed before the Bangalees as their demand of freedom at that time and they had taken it as a right to live.

“The people had taken the six-point demand in such a way that I don’t know whether such a demand did get so much popularity and at so much speed in any country of the world,” she said.

Sheikh Hasina added: “The people of Bangla had taken the demand as a right to live and it was actually that demand.”

The PM said this while presiding over a pre-recorded discussion marking the historic ‘Six-Point Day’, local media reported.

She joined the discussion titled “Bangabandhu Sheikh Mujibur Rahman and Six-point Demand: Charter for Freedom of Bangalees” from her official Ganabhaban residence in Dhaka.

Father of the Nation Bangabandhu Sheikh Mujibur Rahman Birth Centenary Celebration National Implementation Committee organised the discussion as well as a quiz competition on the occasion.

Sheikh Hasina said the people of the country not only extended support to the six-point demand, they also accepted the demand of autonomy as their own demand.

“The six-point demand was blossomed as a demand of freedom of the people at that time,” she said.

Highlighting the background of the six-point demand, the PM said Father of the Nation Bangabandhu Sheikh Mujibur Rahman had placed the demand for establishing the rights of the Bangalee nation.

“There was a background of the six-point demand. It was seen during the 1965 Pakistan-India war that the people of 'Purba Banga' meaning East Pakistan was completely unprotected,” she said.

Sheikh Hasina mentioned that the then Pakistani rulers did not take any step to save Purba Banga which was their province.

The discussion was aired at digital platform including on television, radio, online and social media due to the current global situation for coronavirus, organisers said.