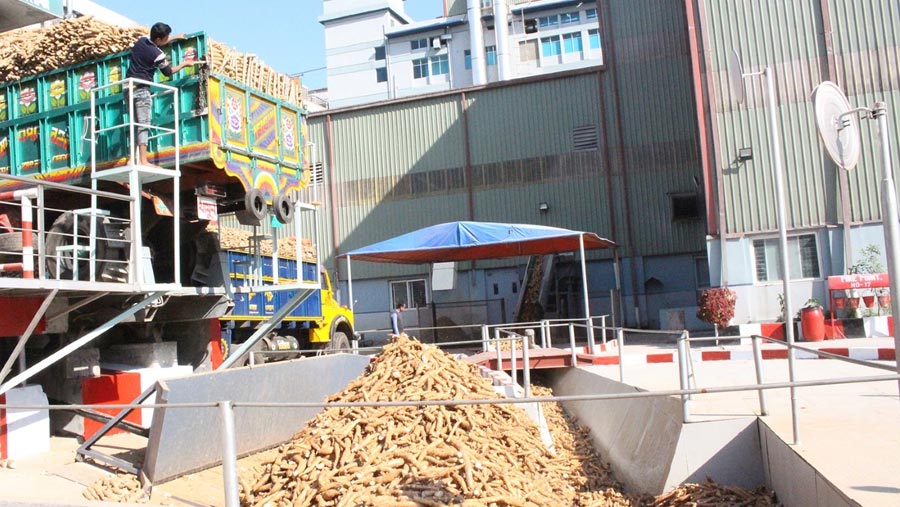 The contractual cassava farmers of PRAN have produced more crops this season than the previous season. This year, they have produced on an average 4 tons of cassava from one acre of land which is 55 percent higher than previous year.

Cassava is a root crop which is planted in fallow lands and hilly areas with a little cost and labor. In our country, the crop is popularly known as “Shimul Alu”.

Mahatab Uddin, Chief Operating Officer at PRAN Agro Business Limited, said, “We started collecting crops in November last year and completed in May of this year. This year, we have collected a total of 19 thousand tons of crops from 4750 acres of land while we were able to collect 13191 tons of crops from 5140 acres of land last year. Some farmers of PRAN has produced maximum 9 tons of cassava from one acre of land in this season. The crop can be harvested twice a year and per acre output could be raised to 14-15 tons by developing new variety. If the yield increases, it will encourage farmers more to cultivate.”

He also said that farmers of Rangamati, Khagrachhari, Sylhet, Habiganj, Moulvibazar, Tangail, Mymensingh, Jamalpur and cumilla districts cultivated the cassava this year. Among the districts, the highest amount of cassava came from Khagrachhari and the cultivation of cassava is increasing in Sylhet. PRAN has collected the crops from the farmers at Tk 7500 for one ton this year.

Mahtab Uddin also said that PRAN introduced contract farming of cassava in 2014. PRAN has been encouraging the farmers to grow the new crop under its contract farming. Through the cassava project, the hilly & fallow lands are being used and the famers are also being benefitted economically. PRAN is encouraging the farmer by conducting training programs, giving financial assistance and providing instruments and seeds at a low cost.

Kamruzzaman Kamal, Marketing Director at PRAN-RFL Group said, the crop can play vital role in country’s agriculture sector. The company has a cassava processing plant in Habiganj Industrial Park in Shaistaganj of Habiganj where sixty thousand tons of cassava can be processed in a year. PRAN is manufacturing starch from Cassava. Cassava starch is used as raw material for processing food like bread, cake, biscuit and noodles. Besides, Cassava starch is now been widely used in garment and pharmaceuticals industries.