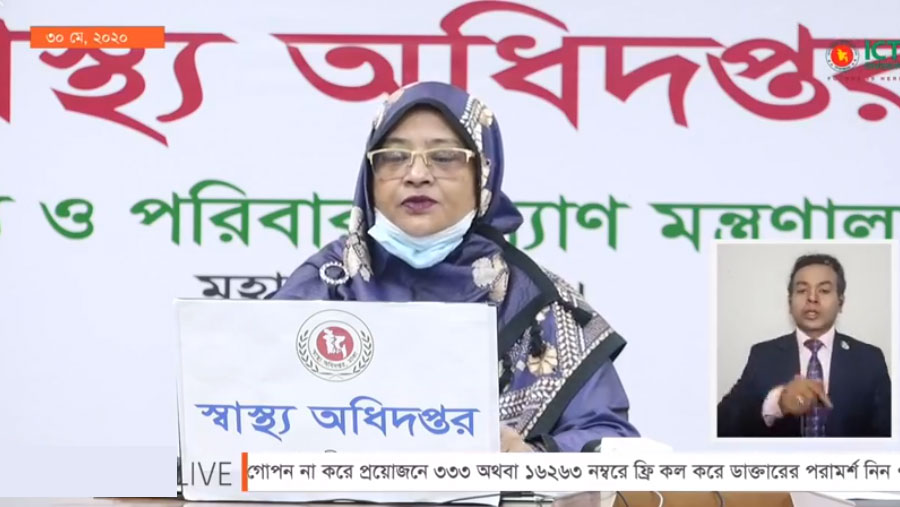 Bangladesh on Saturday (May 30) recorded the highest number of deaths due to Covid-19 as 28 more patients died in the last 24 hours, raising the death tally to 610. The country also saw further rise in coronavirus cases with the detection of 1,764 new cases during the same period, taking the total number of cases to 44,608.

Prof Dr Nasima Sultana, Additional Director General of the Directorate General of Health Services (DGHS) came up with the disclosure at the daily health bulletin.

Across the country 360 more patients made recovery, she said adding that so far 9,375 people have recovered from the disease.

50 RT-PCR labs tested 9,987 samples across the country during the same period.

Mentioning that Bangladesh is in its 12th week of coronavirus infection Dr Nasima, who is also the acting Director General of DGHS, said the infection rate in Bangladesh has been recorded at 17.66 percent on Friday.

Against the total number of detected cases, the recovery rate is 21.02 percent and the mortality rate is 1.37 percent in country.

Among the deceased, 25 were male and three were female.

Out of the 28 dead, 10 died in Dhaka division, seven in Chattogram division, two in Rangpur division and one died in Sylhet division.

She also mentioned that 26 patients breathed their last at hospitals across the country while two died at their homes.

According to statistics collected and presented by IEDCR and A2i, 71 percent of the total infected people in the country are male and 29 percent are female.

She shared detailed information about the infected and dead based on statistics which revealed that 55 percent of total infected people are aged within 21 and 40 years.

Similar statistics of the deceased show that 42 percent of them were aged above 60.

Across the country 469 more people were taken to isolation in the last 24 hours while 2,220 were home and institutionally quarantined during the same period.

Meanwhile, DGHS also published on its website "technical guidelines for prevention and control of Covid-19 social and institutional infections," ahead of the country's shutdown being eased.

The guideline also lists some mandatory steps to be maintained by the managements of the institutions to prevent the spread of coronavirus.