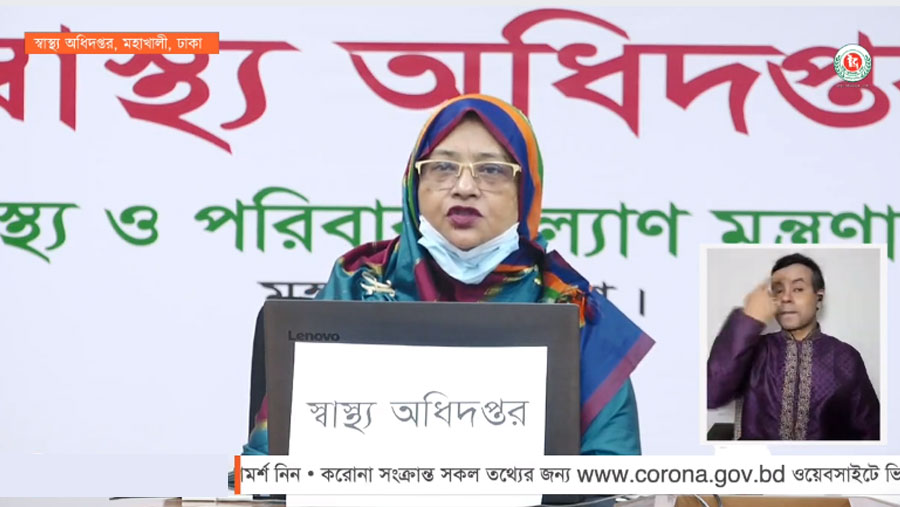 Bangladesh today registered 21 more fatalities from the novel coronavirus (Covid-19), raising the death toll from the pandemic to 522. The tally of infections has also surged to 36,751 after 1,166 new Covid-19 cases were detected in the last 24 hours. The recovery count rose to 7,579 after another 245 patients were released from hospitals in the same period.

Additional Director General of the Directorate General of Health Services (DGHS) Prof Dr Nasima Sultana came up with the disclosure at the daily online bulletin.

Among the deaths reported today, 14 were male and seven were female. Fifteen of them died in Dhaka division, four in Chattogram division and two in Barishal division, she said.

Ten of the victims died in Dhaka district – three in the capital city. Munshiganj, Narsingdi, Manikganj, Gazipur, Cox's Bazar, Pirojpur and Jhalakathi districts recorded one death each. Two died in Chattogram and two other in Cumilla district.

Twenty of the deceased died at hospitals and another at home.

In late March, the government shut down all non-essential services and announced a general holiday to contain the transmission of the virus, first reported in China in December last year. But health experts expressed concerns over the decision to allow people to travel to their home districts during the Eid holidays, fearing that it will worsen the coronavirus situation in the coming days.

The top health official also informed that a total of 5,407 samples were tested at 48 authorised labs across the country during that time.

She said a total of 2,58,441 samples have so far been tested since the detection of the first Covid-19 cases in the country.

She said a total of 662 institutions have been prepared across the country for keeping over 31,840 people in quarantine.

Globally, the number of confirmed cases inched closer to 5.5 million on Tuesday and the death toll climbed to 346,232, according to the Centre for System Science and Engineering of the Johns Hopkins University.

Among the countries, the US has been the worst-hit with the highest recorded deaths of 98,220 patients and about 1.7 million confirmed cases.

Brazil now has the second-highest number of confirmed cases (374,898).

Some countries like China and New Zealand seem to have the pandemic under control. Besides, Europe is in the process of lifting lockdown, but in the Americas, the pandemic is still in full swing – especially in South America.

The World Health Organisation (WHO) declared the coronavirus crisis a pandemic on Mar 11.

China was the world’s first country which on Jan 11 reported the first death from the novel coronavirus in Wuhan, the capital of Central China’s Hubei province.