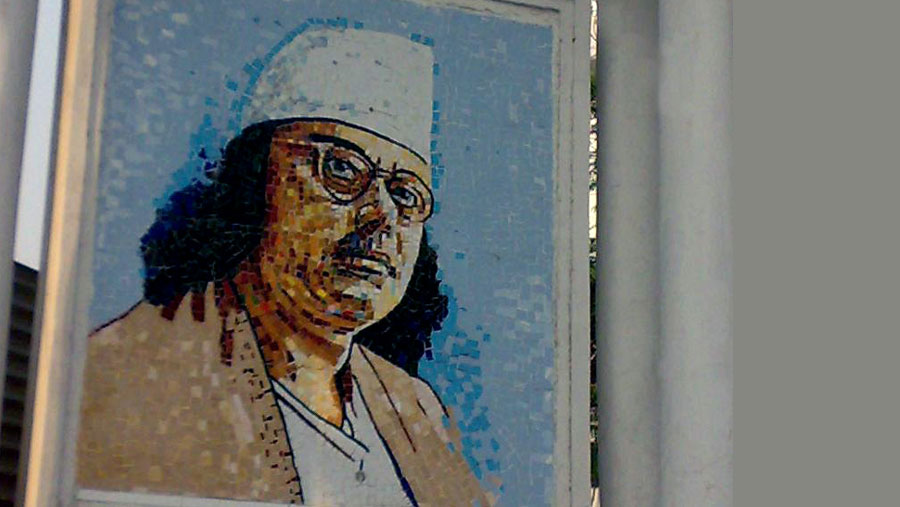 The 121st birth anniversary of National Poet Kazi Nazrul Islam was celebrated today in a limited scale in the awake of the coronavirus pandemic. Marking the day, State Minister for Cultural Affairs K M Khalid, on behalf of his ministry, placed a wreath on the grave of the poet besides the central mosque of Dhaka University in the morning.

Meanwhile, the observance of Nazrul’s birth anniversary got an additional dimension this year as his impressive Eid song ‘O Mon Ramzan-er Oi Rozar Sheshey Elo Khushir Eid’ is being played today as the Muslims’ biggest religious festival, Eid-ul-Fitr, is being celebrated across the country.

The song has become an unofficial title or theme song for the Eid-ul-Fitr, heralding the festival of the Muslims after the month-long fasting in Ramadan.

As soon the song is played, it creates a wave of gratification among the people and prompts them to get ready for celebrating the Eid.

Kazi Nazrul was born on the 11th Joishtha in Bengali calendar year 1306 in Churulia, near Asansol in the Burdwan district of West Bengal.

He was famous for his fiery poem Bidrohi (The Rebel) and his many melodious songs. He was a poet, lyricist, musician, revolutionary and philosopher.

The nation got inspirations from Nazrul’s poems and songs during the great Liberation War and all democratic movements and struggles.

There are 2,400 of his songs, and together, they are known as Nazrul-Geeti or Nazrul Sangeet. He composed the songs, which he liked to tune himself.

Nazrul was the poet of rebellion against injustice and taboos. His nickname was Dhukhu Miah (Mr. Sorrow). True to his name, Nazrul suffered a lot in his life.

His father died in 1910 while he was still at school and he became the breadwinner of the family working for a bakery company, Wahid’s, the most well known in north Bengal at that time.

Later, he resumed studies at Darirampur, Trishal, Mymensingh. But he left his studies to join the British Indian Army as a non-commissioned officer and was posted to Karachi. He left the army and settled in Kolkata, where he started publishing a fortnightly, Dhumketu (The Comet).

The magazine had a fiery tone and was critical of the British rule in India. He soon found himself in prison for publishing a poem written by him, “Anandomoir Agomoney” (Advent of Goddess Durga - the Goddess of destruction of all evil).

In prison, he did not stop writing. He wrote, “Rajbandir Jabanbandi” (Deposition of a political prisoner).

After a prolonged hunger strike, Nazrul was released from the prison. But throughout the 1920s, he found most of his work banned. After the death of his second son - Kazi Bulbul - the poet was sad. He wrote, “My nightingale sleeps forever.”

Although known for his rabid criticism of imperialism, social and religious taboos, Nazrul also explored the themes of love, romance and devotion.

He also introduced a robust style that was very bold and innovative. His use of Persian and Arabic words in Bengali poetry also opened up new literary horizons. In the 1930s, the leading gramophone company of India, HMV, as a lyricist, employed him full-time.

Later All-India Broadcasting Authority employed him. But his luck once again ran out and in 1942, he developed a rare neurological disorder that led to the loss of his voice and memory. Doctors in Vienna diagnosed it as Pick’s disease.

After independence, Nazrul was declared the national poet and he was brought to Dhaka from Kolkata. He died here in 1976 and was buried beside the central mosque at Dhaka University.