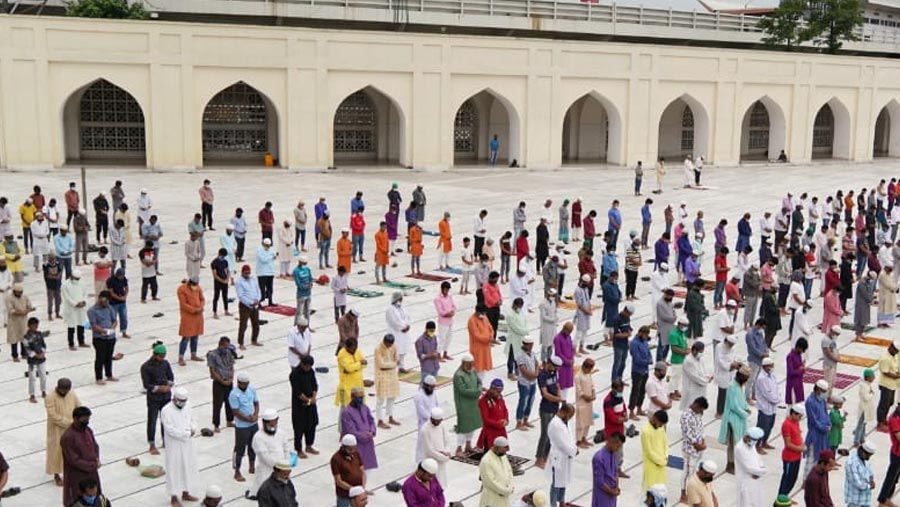 A total of five eid congregations will be held subsequently at the National Mosque Baitul Mukarram on the holy Eid-ul Fitr tomorrow, an official release said.

No Eid Jamaat (congregation) will be held at the National Eidgah Maidan this year due to the corona virus pandemic.

“Like every year, a total of five Eid Jamaats will be held at the Baitul Mukarram National Mosque one after another on the occasion of the holy Eid-ul Fitr tomorrow,” said an Islamic Foundation release in Dhaka today.

The first Jamaat will be arranged at 7 a.m. to be conducted by Hafez Mufti Mawlana Mizanur Rahman, senior Imam of the mosque. The second eid jamaat will be held at 8am and third one at 9 a.m.

Maulana Mahiuddin Kashem will conduct the fourth Jamaat to be held at 10 a.m. The fifth and last Jamaat will be organised at 10.45 a.m. to be conducted by Islamic Foundation Muhaddis Hafez Maulana Waliur Rahman Khan.

Meanwhile, the Religious Affairs Ministry issued a public notice last week, saying that “Islam encourages performing Eid prayer at Eidgah or open ground. But considering the health safety, worshipers are being instructed to perform prayers at mosques, following social distancing. If necessary, more than one jamaat will be arranged at different time slots.”

“Apart from this, all the health guidelines must be followed by the devotees, if failing, government authorities and police will take legal action,” according to the public notice.

Following are the health and safety guidelines, one must adhere to for performing Eid prayer at mosques:

Carpets will not be used on the floor of the mosques. The floors must be cleaned with antiseptic five times on the day, following each prayer. Worshippers must bring their own prayer mats and caps.

Hand sanitizers or handwashing soaps and water must be kept in front of the mosques so that everyone can wash their hands before entering. Everyone must wear masks inside the mosque.

Ablution must be performed before going to the mosque.

Worshippers standing in the same line must maintain a distance of at least three feet from each other. Lines must not be formed in consecutive rows, but alternate rows.

Children, the elderly, the sick, and those engaged in the service of patients cannot participate in the congregation.

General guidelines of the health care department, local administration, and law enforcement agencies must be followed to ensure public safety.

Earlier, the Ministry of Religious Affairs had announced that all mosques will be open to the public for mass prayers from May 7 upon ensuring a few conditions and social distancing measures.

On Apr 6, the government suspended prayers for the public at all places of worship and religious institutions across the country in a bid to stop further spread of the virus.

Every year, the city corporations and district administrations organize central Eid prayer in all the districts of the country. But this year, government authorities will not organize Eid prayers on open grounds to stem the virus spread.

Prime Minister Sheikh Hasina has already instructed not to organize Eid Jamaat on Supreme Court premises, the main Eid congregation in the country. Similarly, Eid prayer at South Plaza of the National Parliament will also not be held this year due to the coronavirus pandemic.

President Md. Abdul Hamid will perform Eid-ul-Fitr prayers in a mosque inside Bangabhaban.