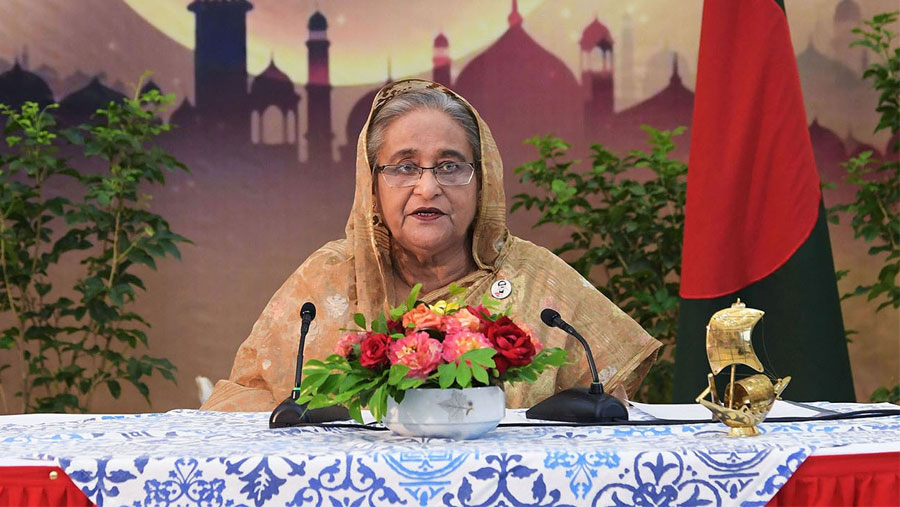 Prime Minister Sheikh Hasina today hinted at further relaxation of the ongoing nationwide shutdown over the coronavirus (Covid-19) pandemic to resume economic activities, saying that it is not possible to keep blocked the way of the people’s income for an indefinite time.

In a nationwide televised address on the eve of the Eid-ul-Fitr, the PM also announced that all the programmes that the government launched to help the people in the wake of the Covid-19 outbreak will continue until the present crisis is over.

“I and my government will stay beside you Insha Allah until the crisis goes away,” she said.

Sheikh Hasina said most of the countries of the world have already been compelled to ease the lockdown over coronavirus because it is not possible to halt the way of income of the people for an indefinite time.

“It’s not possible in any way for the developing countries like Bangladesh,” she said.

The government initially declared a general holiday on Mar 26 for 10 days. Later, that was gradually extended till May 30 as the country kept on seeing a rise in the number of (confirmed) cases and deaths from Covid-19.

The government first allowed from Apr 26 reopening the garment factories that supply some of the world’s biggest clothing brands.

Since then, around 4,000 out of 7,200 factories have resumed production in different industrial belts like Dhaka, Ashulia, Savar, Gazipur, Narayanganj and Chattogram as well as various Export Processing Zones (EPZs) across the country by maintaining health codes, sources at the Bangladesh Garment Manufacturers and Exporters Association (BGMEA) said.

The government also permitted opening of markets and shopping malls from 10 a.m. to 4 p.m. from May 10 by maintaining health guidelines and social distancing measures.

In her nearly 15-minute speech, Sheikh Hasina extended heartfelt Eid greetings to the countrymen and requested all to enjoy the Eid happiness with family members by staying at their homes amid the pandemic.

She simultaneously urged the well-off people to stand beside the poor neighbours and villagers at this bad time.

Citing the World Health Organisation forecast, the PM said the coronavirus pandemic will not go away soon.

“But life will not remain stopped, and as long as vaccine of coronavirus will not be discovered we may have to live along with the virus … economic activities will have to be resumed for the sake of life and livelihood (of the people),” she said.

The PM said the entire world is now confounded due to coronavirus pandemic which put an extreme blow on the life and livelihoods alongside killing countless people across the globe.

“We had to close down everything – offices, courts, mills and factories and business organisations – except some emergency services so that the lethal virus doesn’t spread further and lakhs of people have become jobless as they lost employment,” she said.

She added: “The government has taken all-out measures for (helping) these people.”

Sheikh Hasina said the government is providing food assistance apart from cash aid, adding 1,62,867 metric tons of rice and Tk 91,47,72,000 have so far been allocated.

“We’ve given an allocation of 80,000 MT rice for selling it at Taka 10 per kilogram and issued additional 50 lakh cards this month for the destitute families through which they can buy this rice,” she said.

The premier said a total of Tk 1,250 crore was given to 50 lakh families that have lost jobs but were not included in any assistance programme, through mobile banking and each of the families received Tk 2,500.

“More than Tk 17 crore was given to the qaumi madrasa students and teachers in two phases, while Tk 122 crore two lakh and 15 thousand was provided to imams and muazzin of the mosques as financial assistance,” she said.

Sheikh Hasina said special arrangements have also been made for the marginalised community of society and these programmes will continue until the situation becomes normal.

The PM said to reactivate the country’s economic activities and production system, the government has already announced a set of stimulus packages of Tk 1,01,117 crore which is 3.6 percent of total GDP.

“A total of 18 economic sectors including export-oriented industries, small, medium and cottage industries, agriculture, fish farming, poultry and livestock have been brought under these incentive packages,” she said.

Sheikh Hasina said a total of Tk 2,500 crore was allocated to Palli Sanchay Bank, Probsahi Kalyan Bank and Palli Karma Sahayak Foundation to help the youths and expatriates who lost jobs for the pandemic.

The premier said bumper production of Boro paddy has become a blessing for the country in this perilous time. Boro paddy was cultivated on about 48 lakh hectors of land this year and harvesting is almost completed.

Sheikh Hasina congratulated and extended Eid-ul-Fitr greetings to the farmers and all concerned involved in agriculture for playing an important role in ensuring food security in this critical time.

The premier said the government has started procurement of paddy and rice so that the farmers get fair prices. “In the current season, 22.25 lakh MT food grains, two lakh MT more than the previous year, will be procured” she said.

Sheikh Hasina mentioned that the government has made arrangements for supplying combined harvesters and reapers at subsidised prices and for this Tk 200 crore was allocated.

Besides, she said, Tk 5,000 crore has been allocated for the farmers at only 4 percent interest to offset the agriculture fallout of the Covid-19.

Sheikh Hasina said loan facilities of Tk 5,000 crore against special fund for export-oriented industries have been made effective and those who could not join the work are also getting 60 percent salary.

“Payment of salary and allowances from this incentive package has already started,” she said.

The premier said the government has allowed opening of some shops before Eid by maintaining health codes and other rules.

“Those who opened the business organisations and those who are going to shops must keep themselves protected and avoid gathering,” she advised.

She said: “Your protection is in your hands... keep in mind that if you stay safe, your family, neighbours and the country will remain protected as well.”

Mentioning that storms, cyclones and pandemics will come, Sheikh Hasina said: “We’ll have to go forward by combating those.”

Putting emphasis on united efforts of the people to fight any disaster, Sheikh Hasina said if they (people) remain united it’s not a difficult task to overcome any crisis however deep it is.

“You’ve proved this again and we’ve been able to face the two-and-a half-month period of the coronavirus pandemic successfully for your cooperation and support,” she said.

Mentioning that this year’s Eid-ul-Fitr is going to be celebrated in a different perspective as the country has been facing twin blows of Covid-19 pandemic and super cyclone Amphan, the premier called upon the solvent people not to forget the poor neighbours, villagers and the people of their locality.

“Stand by your poor neighbours with whatever ability you have, and only then the enjoyment of Eid will get its completeness,” she told the well-off people.

Urging all to share the joy of Eid with the family members staying at home in the wake of the coronavirus pandemic, she said, “All of you stay well, sound and safe and enjoy the Eid by staying at home … May the Great Allah bless us.”

The premier said that mass gatherings have been postponed to stop further spread of the lethal virus for which it won’t be possible to celebrate this year’s Eid like the normal time.

“Enquire about the wellbeing of relatives and exchange pleasantries with one another through telephone or virtual media as it won’t be possible to meet physically this year (because of Covid-19 pandemic),” she added.

In this context, Sheikh Hasina said the programmes marking the birth centenary of Father of the Nation Bangabandhu Sheikh Mujibur Rahman and Pahela Baishakh, the first day of the Bangla New Year, had been celebrated through radio, television and digital media to avoid gatherings.

She said measures have already been taken to offer Eid prayers at mosques instead of Eidgahs by maintaining social distancing and the health code.

The premier expressed gratitude to frontline warriors against Covid-19 pandemic, including the physicians, nurses and health workers, for rendering medicare services to all as well as the law enforcers and local administrations for distributing relief materials and implementing other programmes of the government by risking their lives.

She offered deep shock and sorrow at the deaths of people at home and abroad, including physicians, law enforcers, journalists and bankers, from the Covid-19 and the cyclone Amphan and wished early recovery of the coronavirus infected people mentioning that “danger never comes alone.”

Elaborating her government’s measures for ensuring treatment for Covid-19 patients, the premier said that they have already increased the capacity to this end by designating a significant number of private hospitals alongside the public ones and appointing 2,000 physicians and 5,000 nurses.

“We have directed the hospitals to ensure treatment for all types of patients,” she added.

The PM extended heartiest greetings to all the people at home and elsewhere across the globe marking the largest festival of the Muslims that comes after a holy month of fasting.

“This is the day (Eid day) the Great Allah fixes to celebrate with jubilation forgetting all the pains and tiredness during the month of fasting.”

Sheikh Hasina ended her speech by reciting some verses from a legendary song written by Bangladesh’s National Poet Kazi Nazrul Islam. Following are the verses:

At the outset of her speech, the PM paid tributes to Father of the Nation Bangabandhu Sheikh Mujibur Rahman and other martyrs of the Aug 15 carnage, four national leaders, three million martyrs, and two lakh mothers and sisters who were tortured during the Liberation War.