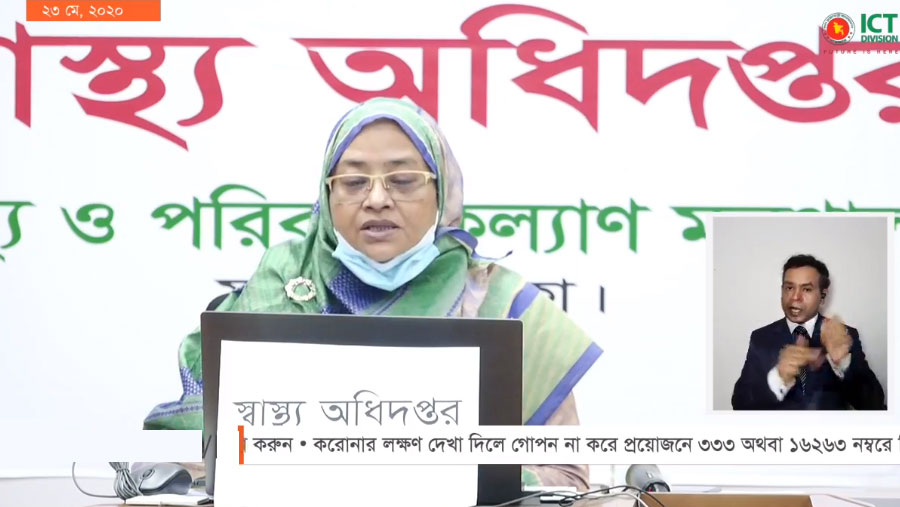 Bangladesh today reported 1,873 fresh positive cases from the novel coronavirus (Covid-19), a single-day record, raising the tally of infections to 32,078. The fatalities from the pandemic surged to 452 as 20 more Covid-19 patients died in the last 24 hours. The recovery count also jumped to 6,486 in the last 24 hours after 296 patients were discharged from hospitals.

Additional Director General of the Directorate General of Health Services (DGHS) Prof Dr Nasima Sultana came up with the disclosure at the daily health bulletin.

Among the deceased, 16 were male and four were female. Four died in Dhaka division, eight in Chattogram division, two each in Rangpur, Rajshahi and Mymensingh divisions, and one each in Sylhet and Khulna divisions, Dr Nasima said.

Of the 22 victims, 15 died at hospitals and four at homes while another was declared brought dead at hospital.

Among the newly deceased patients, Dr Nasima said, 12 were aged above 50.

She said that a total of 10,834 samples, the highest in a single day, were tested during the period.

The top health official informed that, among the total infections, 20.22 percent patients have recovered while 1.41 percent died so far since the first Covid-19 positive cases were reported in the country on Mar 8.

Bangladesh confirmed the first coronavirus death on Mar 18, ten days after the detection of the first Covid-19 cases.

As of May 20, Dhaka city has been considered as the worst-affected with 58.18 percent of Covid-19 cases, while Dhaka division has remained at the top position with 76.54 percent infected cases out of total coronavirus patients, according to Institute of Epidemiology, Disease Control and Research (IEDCR).

As of May 23, among the Covid-19-prone districts, Narayanganj is the most hardest hit one with 1,666 cases, according to the IEDCR data. It was followed by Chattogram with 1,340 cases, Gazipur with 561 positive cases, Munshiganj with 432, Cumilla with 425 cases, Dhaka with 475 cases, Mymensingh with 375 cases, Rangpur with 369 cases, Cox’s Bazar with 283 cases, Kishoreganj with 212 cases, Jamalpur with 175 cases and Narsingdi with 175 cases.

The health official said a total of 2,34,675 samples have so far been tested since the detection of the first Covid-19 cases in the country.

At present, the country has a total of 399 ICUs and 106 dialysis units, Dr Nasima said.

In case of critical Covid-19 patients, special facilities including oxygen, ICU and dialysis units are needed in hospitals.

According to the DGHS, a total of 2,60,416 people were kept at both home and institutional quarantine and 2,052,59 people were released from quarantine, while the number of people who are now in quarantine is 55,157.

It said a total of 626 institutions have been prepared across the country for keeping at least 31,840 people in quarantine.

Besides, 4,305 people have now been kept in isolation.

The health service organization said as part of taking preventative measures to stop imported cases of Covid-19, the authorities of all gateways, including airports, land ports and waterways, are continuing screening of all foreign returnees.

As of May 23, 2020, 09:47 GMT, 340,319 people have died so far from the Covid-19 outbreak and there are 5,322,665 currently confirmed cases in 212 countries and territories, according to Worldometer, a reference website that provides counters and real-time statistics for diverse topics.

China was the world’s first country which on Jan 11 reported the first death from the novel coronavirus in Wuhan, the capital of Central China’s Hubei province.

The virus outbreak dealt a heavy blow to the global economy, disrupting the supply chain and forcing countries to go into prolonged lockdowns.

Bangladesh government declared a general holiday since Mar 26 to slow down the transmission of the virus. But the move left millions without a job and a large section of people appear to be reluctant to maintain health guidelines.

The government has announced a series of stimulus packages to tackle the economic fallout of the shutdown.