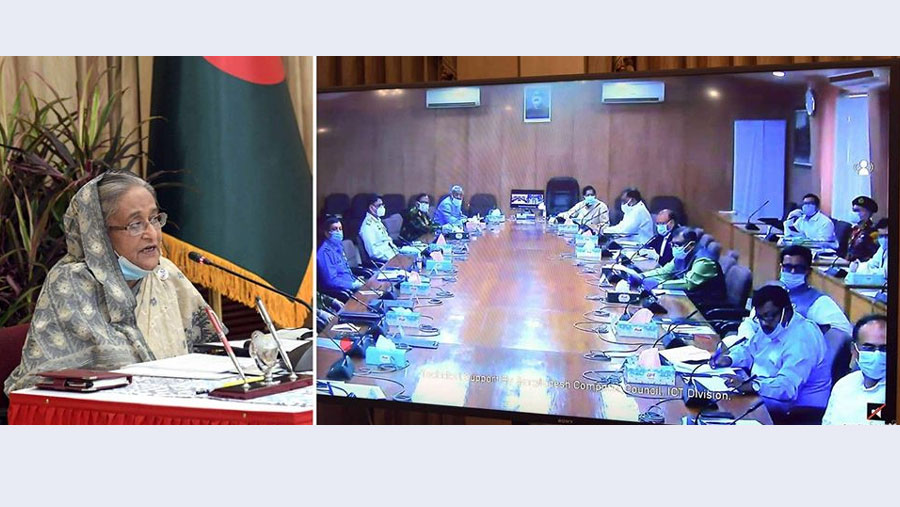 The premier, who joined the meeting from her official residence Ganabhaban through video-conference, sought blessings of almighty Allah so that the lives and properties of the people are not affected by the cyclone, mentioning that it is a natural calamity and people have no hand in it.

The PM expressed satisfaction at the overall preparations to face the cyclone and thanked all concerned, including the disaster management and relief ministry, armed forces, police and local people involved in the process.

In this context, she said, “Twenty lakh people have so far been evacuated to the cyclone centres as part of the prior preparation. As many as 13241 cyclone shelter centres have already been opened to this end.”

Mentioning that the cyclone ‘Amphan’ is going to hit Bangladesh when the government is trying its best to face the situation arising out of the Covid-19 pandemic, the prime minister said, “The disaster (cyclone) comes at the time when we are making all out efforts to offset the coronavirus disaster.”

The cyclone might hit the country this evening as per the forecast, she said, adding that the government has enough preparations to face the cyclone.

The PM said her government always responded very fast, unlike the previous regimes, whenever it received forecast of any disaster, engaging every human and material support to reduce the loss of lives and property.

She recalled that the then BNP government took no steps when the deadly 1991 cyclone hit the south-eastern coastlines, saying: “Even they didn’t care for the information about the disaster for which thousands of people were killed and planes of the air force, ships of navy and other public properties got damaged in the cyclone.”

Then opposition Awami League leaders and activists reached reliefs to the cyclone affected people, before the government did, after going to the remotest areas by fishing boats.

After assuming office in 1996, the PM said her government had taken special programmes and formulated a policy to let the people know what to do if any disaster strikes.

She added: “When came to power in 1996, we found no modern equipment in Bangladesh Meteorological Department and we started taking various measures to make it well-equipped with advanced equipment.”

internationally to take prompt measures to disseminate information to the grassroots level to get prepared in advance to face any disaster.

Referring to the help extended to farmers in harvesting the Boro paddy by activists of the Chhatra League, Krishak League, Awami Swechhasebak League, Jubo League and local Awami League, she said, “It is a matter of hope that 90 percent of Boro paddy has already been harvested (before the possible assault of the cyclone Amphan).”

Mentioning different successes in disaster management, the premier said her government has achieved a great success in reducing risks and losses of lives and properties caused by various disasters like cyclone, which earned international community’s acclamation.

The premier said Father of the Nation Bangabandhu Sheikh Mujibur Rahman was the pioneer in disaster risk reduction programmes in the country, adding Bangabandhu had taken various initiatives like building ‘Mujib Kellas’ to protect the lives and properties of the people from devastating cyclones.

“Bangabandhu prepared 45,000 volunteers after imparting them with appropriate training with the kind cooperation of the then League of Red Cross to face any disasters,” she continued.

Ministers of concerned ministries, cabinet secretary and chiefs of the three services joined the meeting from the Secretariat through video conference while the state minister for disaster management and relief from the Ganabhaban through the video conference.