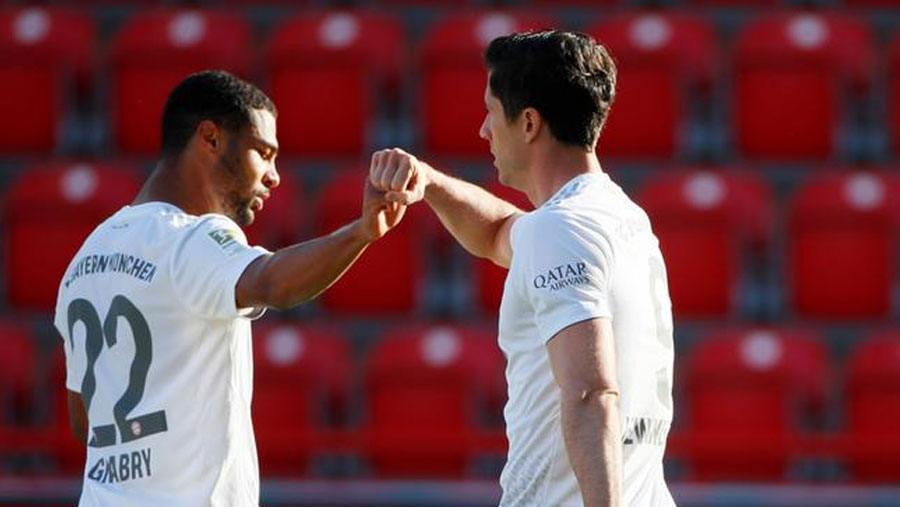 Football returned as the Bundesliga found itself in the spotlight like never before.

It has been allowed to restart without fans, most people off the pitch wearing masks and muted goal celebrations.

Robert Lewandowski gave the champions the lead with a penalty – his 40th goal in 34 Bayern games this season. And Benjamin Pavard headed in a late second from Joshua Kimmich's corner.

Saturday's games gave us an indication of what football will look like for the foreseeable future, as the Bundesliga became the first elite league to return.

And it was more of the same on Sunday, with substitutes and coaches socially distancing on the bench – including using the front rows of the otherwise empty stands.

The footballs were disinfected by ball boys and left in certain spots around the pitch, rather than handing them directly to the players.

Even goal celebrations were mostly done without embracing, although Pavard hugged David Alaba after his late goal.

Players and coaches were quarantined in their team hotels this week, undergoing regular coronavirus testing and only leaving to go to training together.

Union Berlin coach Urs Fischer had to miss this match because he broke quarantine when his father-in-law died.

The lack of fans was a real shame for Union, whose link with their supporters is legendary in Germany.

This is their first ever season in the top flight, with the fixture against Bayern – who have won the past seven Bundesliga titles – always one of the games fans look forward to the most.

Bayern were comfortable winners in the end, despite only having three shots on target.

Thomas Muller had a goal ruled out by the video assistant referee for offside before Lewandowski scored the opener following a foul by Neven Subotic on Leon Goretzka.

Pavard's header with 10 minutes to go wrapped up the victory to take them four points above Borussia Dortmund at the top.