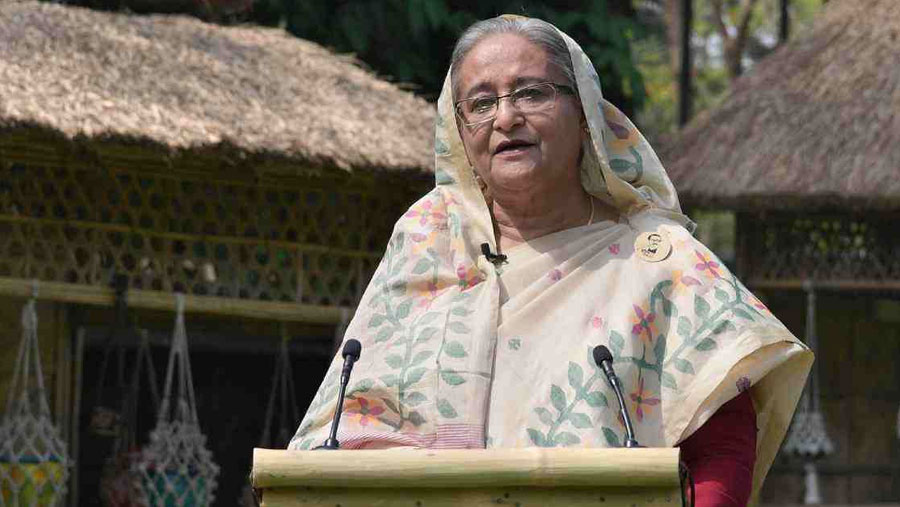 Prime Minister Sheikh Hasina today urged the nation to await a sunny day in an address on the eve of the Bangla Nabobarsho (Bengali new year) and Pahela Boishakh.

“The (coronavirus) darkness which surrounded us, must end one day,” she said in her 16-minute nationwide televised address marking the Bangla Nabobarsho 1427 from her official Ganobhaban residence lawn.

Sheikh Hasina said the enraged scene of the Bengali calendar’s first month of Boishakh inspires all to be brave and paves ways for new creation from the destruction referring to National Poet Kazi Nazrul Islam’s famous poem “Proloyollash” or “Ecstasy of Destruction”.

The translated version of the verses read: There rages the summer storm flying the flag of the New and the Young, Come, make merry and rejoice . . . Oh, have no fear! . . . The rotting old and the dying decrepit will now be wiped out for good.

The premier also quoted from Poet Rabindranath Thakur and Poet Satyendranath Dutta saying a sun of new days must rise by overcoming the deep darkness of coronavirus that eclipsed the whole world.

Sheikh Hasina simultaneously urged all to strictly follow directives to prevent spread of the virus staying indoor and announced some fresh initiatives as succour particularly for the vulnerable people.

She said five lakh tonnes (MT) of rice and one lakh MT of wheat worth Tk 2,503 crore were allocated for distribution among low-income people free of cost.

Besides, she said, 74,000 MT of rice would be distributed among poorer people in urban areas for three months at Tk 10 per kilogram under the government’s OMS programme which would cost the national exchequer an amount of Taka 251 crore as subsidy.

Sheikh Hasina said her government by now sanctioned Taka 750 crore for health and life insurance of doctors, nurses, health workers, field-level officials, armed forces and paramilitary BGB personnel, law enforcement agencies members and other employees of the republic who are directly on duty to combat the pandemic.

She said Tk 100 crore was being allocated as special honorarium for the government health workers working directly with Covid-19 patients and said the entire nation was appreciating all including them for their response to call of duty.

The premier reassured the nation that her government firmly stood by the people at the hour of the COVID-19 darkness and called upon not to be scared as it could affect one’s resistance capacity.

“Don’t be scared as the fear weakens the prevention capacity of the people. Don’t spread panic … we’ve all to face the situation with courage and the government always stays with you,” she said.

Sheikh Hasina reminded all that the Bengalis are a nation of heroes while they had bravely faced many disasters in the past and “we triumphed in the Liberation War in 1971” as well.

“We are a victorious nation and we’ll be able to contain the pandemic caused by the lethal virus together Insha Allah,” she said.

The PM prayed to Allah so that the storm of the pandemic is stopped fast and the people of the country stay well and healthy.

“It’s my earnest prayers to Allah in the Bangla New Year that the volatility of the deadly disease is halted quickly,” she said.

Sheikh Hasina said some vested quarters were out to mislead the people by spreading rumours and urged the people not to be confused in the rumour.

“It’s not expected during this crisis in any way,” she said.

The PM requested the media people to highlight the actual information with responsibility on the coronavirus situation.

Noting that she doesn’t know how long the ongoing crisis will persist and how much impact it will put on Bangladesh’s economy, Sheikh Hasina said her government has been working untiringly to offset the possible negative impact on the economy.

The premier said the government has already announced various stimulus packages involving Tk 95,619 crore which is 3.3 percent of the GDP (Gross Domestic Product) to offset the possible adverse impact on the economy due to the nationwide shutdown declared for the coronavirus pandemic.

Spelling out measures taken by the government, Sheikh Hasina said, “We’ve sorted out four main tasks to fallout the probable blow on the economy due to coronavirus outbreak.”

She said programmes will be executed in three phases with starting instant implementation in the rest three months of this fiscal, the short-term from the next year and mid-term in the next three years.

Sheikh Hasina elaborated the four programmes taken to cope with the possible economic impact on the country due to the coronavirus outbreak.

2) Giving financial stimulus packages: The main purpose of the stimulus packages to revive the economic activities, keeping the job of the workers and employees as well as the competitive edge of the entrepreneurs intact.

4) Increasing monetary supply: The monetary supply will be increased insuch a way that there will be no inflation and helpful to overcome the adverse impact on the economy.

The premier also described the measures taken by her government for safeguarding the marginalized people alongside continuing the social safety net programmes to make up for the possible wrath arising out of the coronavirus outbreak.

1) A total of five lakh metric tons of rice and one lakh metric ton wheat worth about Tk 2,503 crore have been allocated to distribute those among the low-income people.

2) The programmes relating to sale of rice at Tk 10 per kilogram among the low-income people under the OMS (Open Market Sale) have already started in the towns and Tk 251 crore subsidy will be given for the purpose.

3) Directive has already given to quickly prepare the list of day labourers, rickshaw-van drivers, motor- construction workers, newspaper hawkers, hotel workers and the people of other professions who have lost their jobs due to declaring of longtime general holidays or partial lockdown.

Cash will be sent in a single installment directly to their bank accounts once the list is completed. A total of Tk 760 crore has been allocated in this sector.

4) Allowance for elderly people, widows and the women repressed by their husbands under the social safety net programmes will be made cent percent in the most-poor 100 upazilas. As many as taka 815 crore have been allocated in the budget for the purpose.

5) Building houses for homeless people as part of the programmes “none will remain homeless” marking the birth centenary of the Father of the Nation would be implemented quickly. A total of Tk 2130 crore will be allocated for this purpose.

Stressing the need for boosting the agriculture production in the current situation, Sheikh Hasina said, “We shouldn’t leave a small piece of land uncultivated as we don’t want to experience any food crisis in the days to come.”

The premier said the agriculture related ministries have already been asked to take effective measures as no shortage of agricultural inputs such as fertilizer, seeds and pesticides arises and reach those to farmers in time.

The PM also said that her government has decided to procure additional 2 lakh metric tons of paddy in comparison to the last year to facilitate the farmers to get actual price of the Boro paddy.

“We’ve decided to allocate additional Tk 860 crore to this end while Tk 200 crore have already been allocated for purchasing agricultural machinery,” she continued.

Sheikh Hasina pointed out that the government has raised a fund of Tk 5000 crore for disbursing as the current capital in the agricultural sector.

“Loan could be provided from the fund at 4 percent interest rate to the small and medium farmers for agriculture, fisheries, dairy and poultry,” she said, adding Tk 9500 crore have been allocated as agriculture subsidy.

The premier said her government is keeping a sharp eye on the situation evolved for the coronavirus pandemic and has been taking measures whatever necessary to protect Bangladesh from its onslaught.

In this context, she said, “In this moment, there is no crisis of foods as there is sufficient stock of foods in the government warehouses as well as in the houses of well-off farmers.”

Referring to last season’s bumper production of Ropa Aman (Transplantation Aman) paddy, she said there was a forecast of abundant production of Boro paddy in this season.

“Special measures have been put in place to ensure uninterrupted supply and distribution of foods and agricultural products,” she said.

Appreciating the strides of affluent section of people of the society to join hands with the government in distributing relief materials, the prime minister requested the well-off people to continue their efforts in the coming days.

But, she said that it was necessary to distribute the relief goods in coordination with the local administration and law enforcement agencies instead of giving those separately to check the coronavirus spreading.