Man City fight back to win at Real Madrid 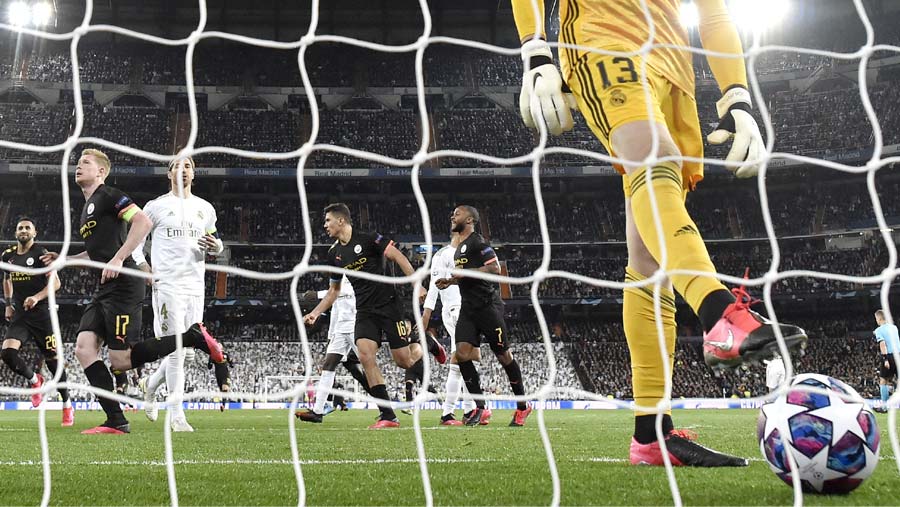 With two late goals in five minutes, Manchester City turned the tables on Real Madrid and boosted its chances of finally winning an elusive Champions League title while it can. Gabriel Jesus scored an equalizer in the 78th minute and Kevin De Bruyne netter an 83rd-minute winner from the penalty spot as Man City came from behind for a 2-1 win over Madrid in the first leg of the last 16 at the Santiago Bernabeu Stadium on Wednesday (Feb 26).

After a wary first half, the hosts capitalised on a defensive mix-up between Rodri and Nicolas Otamendi to take the lead as the impressive Vinicius Junior raced towards goal before neatly squaring for Isco to slot home.

Sergio Ramos shot over as Real Madrid looked to double their advantage but Man City equalised 12 minutes before time when Jesus nodded in from close range.

It was the least City deserved for what had been an impressive away performance by Pep Guardiola's side and things got even better seven minutes from time when substitute Raheem Sterling was brought down inside the box and De Bruyne stepped home to confidently convert from the spot.

It got even worse for Real Madrid when they were reduced to 10 men with five minutes remaining. Ramos brought down Jesus as he ran through on goal and the defender was shown a red card.

It was the first time City had beaten Real Madrid in the Champions League and means they are in the driving seat before the second leg at the Etihad on Mar 17.

The win will have been all the more welcome for City fans after their side were earlier this month banned from European club competitions for the next two years.

The club's appeal against the decision has been registered by the Court of Arbitration for Sport, and the issue will continue to overshadow their immediate future, but this display in Madrid will give them hope of progressing far in the current campaign.

* This was the first Champions League game at the Bernabeu to be goalless at half-time since the quarter-final second leg against Bayern in April 2017.

* City are the only one of the four English teams left in the competition to have scored in their round of 16 first leg.

* Jesus has scored in all three of his appearances in the Champions League round of 16.

* This was De Bruyne's first Champions League goal since September 2017 – and his first in the knockout rounds since April 2016.

* This is City's first win in a knockout game away to a Spanish club in UEFA competition (D1 L4); home and away, a 3-0 home victory against Athletic Club in the 1969/70 European Cup Winners' Cup first round second leg was their only win before tonight (D3 L6).

* Only five times in the UEFA Champions League era has a team turned round a tie after a home first-leg defeat, although three of those occurred in 2018/19.