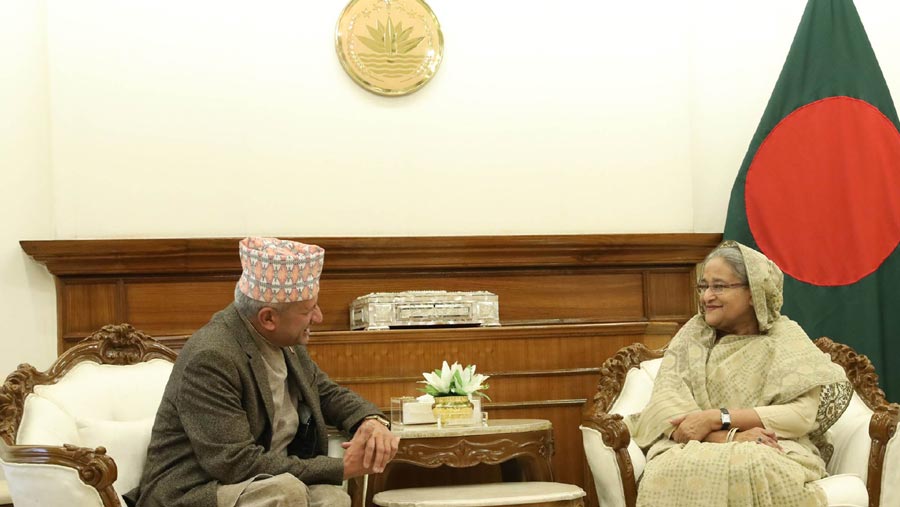 Prime Minister Sheikh Hasina on Wednesday (Feb 19) offered Bangladesh’s airport and seaport facilities to Nepal as part of Dhaka’s insistence for regional connectivity for common prosperity as its visiting foreign minister Pradip Kumar Gyawali called on her at the PMO.

“Bangladesh is always giving priority on neighbours in terms of cooperation,” premier’s press secretary Ihsanul Karim quoted her as saying in a media briefing after the call on.

Sheikh Hasina, he said, told Gyawali that her government was elevating Syedpur Airport as an international aviation facility expecting it to be a centre for regional connectivity.

“Nepal and Bhutan can use the Syedpur Airport (and) Chattogram and Mongla ports for the mutual benefits” she said.

The PMO spokesman said cooperation in power sector and bilateral trade and commerce also featured the premier’s meeting with the Nepalese foreign minister.

Sheikh Hasina said she always advocated for transit facilities for Nepal as part of Dhaka’s campaign for enhanced regional connectivity, particularly under The Bangladesh, Bhutan, India, Nepal (BBIN) Initiative as a sub regional architecture of the eastern South Asian nations.

She said joint hydroelectricity projects involving Dhaka, Kathmandu and New Delhi could be a good example of regional cooperation while Nepal enjoys a special natural advantage to generate hydro power while Bangladesh was already purchasing electricity from India.

On the other hand, she said, Bangladesh could export vegetables and fish to Nepal during the winter season when the mountainous nation needed supplies from outside.

Sheikh Hasina said the two countries needed to enhanced cooperation as both the neighbours appeared to be worst victims of climate change.

The Prime Minister recalled with gratitude Nepal’s support during Bangladesh’s 1971 War Liberation in 1971.

Gyawali said that Kathmandu expected its ties with Bangladesh to a new trajectory against the backdrop of Bangladesh’s fast socio-economic development under Sheikh Hasina’s dynamic leadership as his country was making a rapid progress by now achieving 7.1 percent growth rate this year.

He apprised the premier of his comprehensive and fruitful meeting with his Bangladesh counterpart Dr A K Abdul Momen and commerce minister Tipu Munshi.