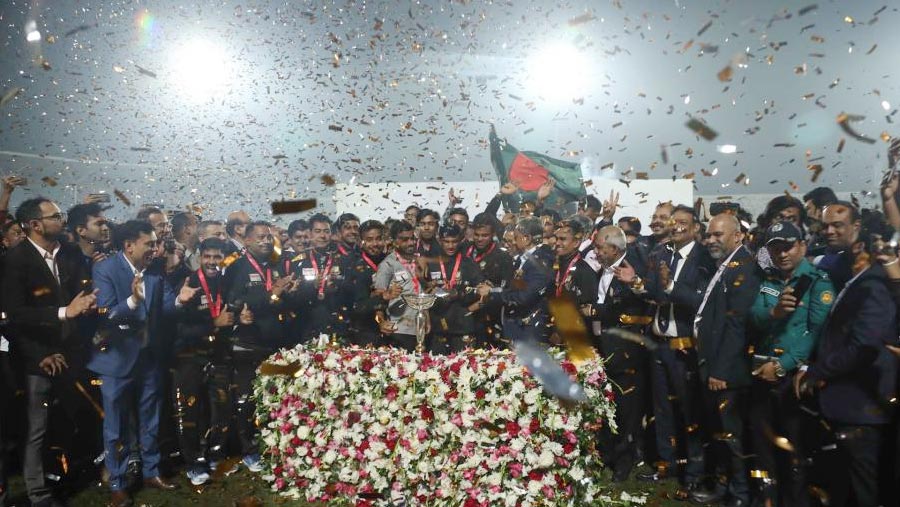 The Bangladesh Under-19 cricket team which created history by clinching the World Cup title for the first time in country’s cricket history reached home on Wednesday (Feb 12) afternoon. A flight carrying the U-19 cricket team landed at the Hazrat Shahjalal International Airport at around 4.52 p.m.

Bangladesh Cricket Board (BCB) president Nazmul Hassan Papon and State Minister for Youth and Sports Zahid Ahsan Russell received the young Tigers at the airport with flower bouquet. Other government and BCB high officials were also present at the airport to receive the triumphant young tigers, local media reported.

“This is the biggest achievement in our country’s sports history,” State Minister for Youth and Sports Zahid Ahsan Russell said.

“We are proud for the achievement they brought for us. They have made the whole nation proud indeed. I am very hopeful that they would build on that success and bring more accolades for the country,” the State Minister said.

The youth team was then escorted to the Home of Cricket - Sher-e-Bangla National Cricket Stadium.

Hundreds of spectators were waiting at the Sher-e-Bangla National Stadium to receive the Young Tigers. They were screaming ‘Bangladesh, Bangladesh’ ...

As per the latest plan, most of the players stayed at the National Academy tonight. They will travel to their respective villages on Thursday morning.

The Young Tigers clinched the trophy for the first time, edging four-time champions India by three wickets in a nail-biting final on Sunday.

In what was their first appearance in the tournament’s 22-year history, Bangladesh showed an unwavering resolve to secure the title as skipper Akbar Ali played a masterful 43 not out under tremendous pressure. It was Bangladesh’s first World Cup title in cricket at any level.

The U-19 boys received huge plaudits after winning the title, which was described as the biggest achievement in the country’s sports history.

In a high-octane final, Bangladesh managed to bundle India out for 177. The junior Tigers seemed to make it one-way traffic when the openers put on 50-run for the opening stand. But India bounced back in style and reduced the Tigers to 102-6.

As it looked that it was going to be another heartbreak for Bangladesh, like the previous finals in Asia Cup and tri-nation tournament in England, Akbar demonstrated a sheer patience and serenity. He got an able company from a severely injured opener Parvez Hossain Emon, who initially was retired hurt on 25, but came back to the ground when the side was in dire strait.

Emon played through enormous pain and scored 43 to resist the rot. However Akbar calmly gave the final touch amid a rain interruption that saw them to overhaul a revised target of 170 in 42.1 overs.

“We have to nurse them properly. They have the talent within them and they proved it. Now, it is our duty to make them our resources,” Russell said.