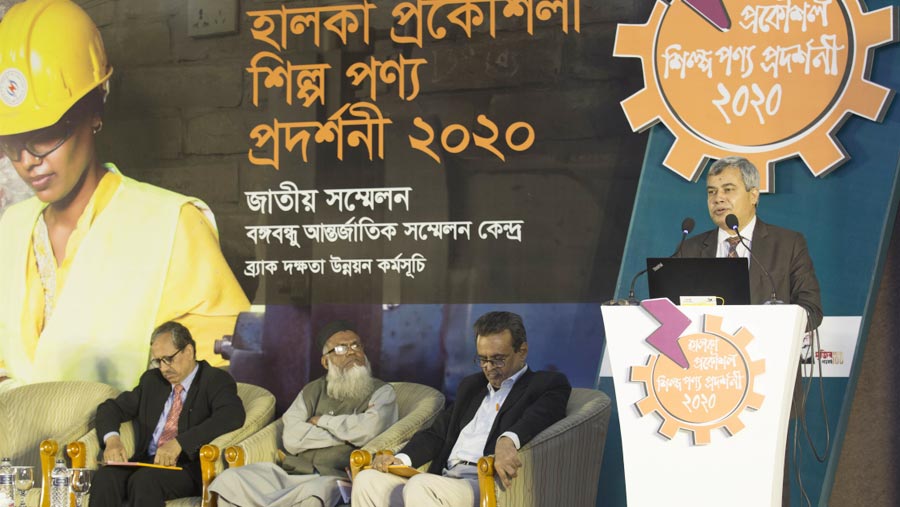 Secretary to the Ministry of Industries Abdul Halim addresses the second and concluding day of the light engineering fair organised by BRAC at Bangabandhu International Conference Centre in the capital on Tuesday (Feb 11).

Engaging the youth in productive activities and encouraging them to become entrepreneurs is the best thing we can do to boost economy. If the youths decide to be entrepreneurs themselves rather than running behind jobs, they will be able to provide jobs to the unemployed people and contribute to the economy. Access to finance, technology and skills training are crucial for the light engineering sector to attract the youth.

The fair was held under BRAC’s ‘PRo-poor growth of rural enterprises through sustainable skills-development’ (PROGRESS) project funded by European Union. A total of 58 small businesses participated in the fair from 41 districts and received work orders worth more than Tk 1.9 crore.

The three-year Progress project began in February 2017 to support the growth of the country’s light engineering sector by developing dynamic and competitive micro and cottage enterprises.

Inaugurating the event on Monday, Salman F Rahman, Private Industry and Investment Adviser to the Prime Minister, lauded BRAC’s gender-inclusive strategy and said public-private partnership is one of the reasons light engineering sector is flourishing.

“The basic weakness of our economy is our excessive dependence on the readymade garment industry. We have to diversify our export capacity and products in which light engineering sector will play a crucial role,” he said.

Addressing the event, Secretary to the Ministry of Industries Abdul Halim emphasised engaging the youth in productive activities and said encouraging the youth to become entrepreneurs is the best thing to do to boost the economy.

“Access to finance is a significant area and we need whatever you want in written so that we can work on the issues entrepreneurs face. I want to thank BRAC for bringing approximately 5,000 light engineering entrepreneurs under the same project. I would request them to keep these people under their umbrella so that they can avail benefits of the BRAC access. I would also request Bangladesh Small and Cottage Industries Corporation (BSCIC) to enlist these 5,000 entrepreneurs in their database,” he said.

Also present, Mokammel Hossain, Additional Secretary (SDGs) to Prime Minister’s Office, echoed the chief guest and said if the youth decide to be entrepreneurs themselves rather than running behind jobs, they will be able to provide jobs to the jobless and contribute to the economy.

“Women constitute half of our total population and if they lag behind, the country cannot move ahead. BRAC’s gender policy, women’s inclusion in skills development training, inclusion of women in mainstream employment and disability-inclusive policy is exemplary and praiseworthy,” he added.

President of Bangladesh Engineering Industry Owners Association Abdur Razzak pointed that the government has taken significant initiatives for the light engineering sector and that those are being implemented through the BSCIC.

Speaking on the occasion, Bangladesh Bank General Manager Lila Rashid noted the fact that several of the experts identified access to finance as the decisive factor that is affecting the growth of the light engineering sector.

“This sector is also very important to us and that is why banks allocated 21 per cent of their total loans to the SME sector last year and the cottage and small industries received a significant amount of the total disbursement. We believe the light engineering sector has a huge potential to attract finance from the financial institutions,” she said.

A study by the project shows that the business productivity of light engineering workshop owners increased by 29 per cent after the project intervention. A total of 500 people received training and support facilities to start their own businesses and among them 223 were female.