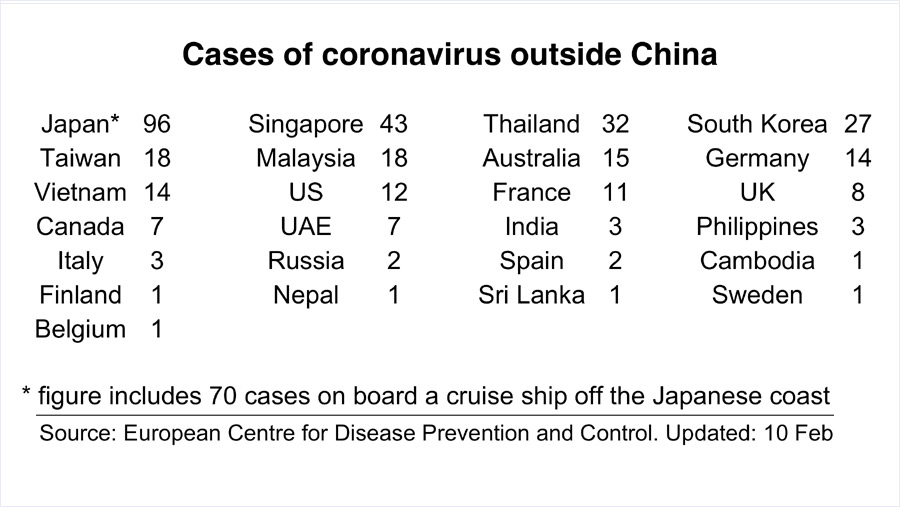 The number of people killed by the new coronavirus has risen to a daily high of 103 in Hubei province on Monday (Feb 10), taking the overall number of deaths since the breakout to more than 1,000. But the number of new infections was down 20% from the day before.

Hubei's health commission confirmed 2,097 new cases in the province on Monday, down from 2,618.

An advanced team of medical experts from the World Health Organization (WHO) has arrived in China.

There are now more than 42,200 confirmed cases across China, the gravest public health crisis the country has faced since the SARS outbreak in 2002-3.

In a rare public appearance amid the outbreak, China's President Xi Jinping on Monday visited health staff in Beijing treating patients infected with the new coronavirus.

What's the latest in China?

The Hubei provincial health commission said 103 people died from the virus in Hubei on Monday, up from 97 on Sunday.

The commission said Hubei had a total of 31,728 cases with 974 deaths by the end of Monday. The fatality rate was 3%. The nationwide death count from the coronavirus is now at 1,011.

More than three-quarters of the deaths have been in Hubei's provincial capital, Wuhan, the epicentre of the outbreak. The city of 11 million has been in lockdown for weeks.

A WHO-led international expert mission arrived in China late Monday to work with Chinese officials. The mission is led by Bruce Aylward, who oversaw the WHO's 2014-2016 response to the Ebola epidemic in West Africa.

President Xi wore a face mask to visit health workers in Beijing on Monday but is yet to visit Wuhan.

"We must have confidence that we will eventually win this battle against the epidemic," he was quoted as saying.

China's leadership had already faced accusations of downplaying the severity of the virus - and initially trying to keep it secret, but the WHO has praised its efforts to control the virus, including quarantines on a massive scale.

What about the rest of the world?

Four new UK cases were announced on Monday - taking the total number of people infected in the UK to eight. The government has warned of a "serious and imminent threat".

Meanwhile, 65 more people have tested positive on the quarantined Diamond Princess cruise ship moored off Japan - meaning 135 out of 3,700 passengers have caught the virus.

U.S. President Donald Trump said on Monday he believed the outbreak would disappear in April due to warmer weather, a theory not in line with health experts.

What are the symptoms of coronavirus and what can help stop its spread?

The main signs of infection are fever (high temperature) and a cough as well as shortness of breath and breathing difficulties.

Frequent hand washing with soap or gel, avoiding close contact with people who are ill and not touching your eyes, nose and mouth with unwashed hands, can help cut the risk of infection.

Catching coughs and sneezes in a tissue, binning it and washing your hands can minimise the risk of spreading disease.